Our Lucky Day: Fortunate Survival in the Nuclear Age

This Is Our Lucky Day 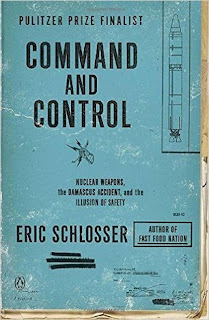 This is our lucky day for quite a few reasons. We haven’t yet rendered the climate of this planet uninhabitable for our species. For those of us who are not in prison: we’re not in prison — and not because of some significant difference between us and many who are. For those of us not hungry or scared . . . (see note above re: prisons). But there’s another big reason that this is our lucky day — a reason that is different in kind from these.

This is our luck day and we’ve had about 25,965 of them and counting. Ever since the creation of nuclear weapons there have been thousands of accidents, incidents, and close calls. Nuclear bombs have been accidentally dropped on the United States by the United States and come very close to detonating.

The United States and the Soviet Union/Russia have come very close to believing the other had begun the nuclear apocalypse.

In one case, the decency of a single Russian sailor, Vasili Arkhipov, probably saved the globe. Nuclear weapons have been lost in the ocean, been flown unwittingly across the country and left unguarded, and — in an incident that is the chief focus of a new film — accidentally blasted out of a bunker in Arkansas to land in a nearby field where the “warhead” did not explode in great part because September 19, 1980, was one of our lucky days.

Command and Control, a film based on a book by Eric Schlosser, tells the story of one weapon 600 times as powerful as the one dropped on Hiroshima. One weapon and one worker who chose one wrong tool causing him to drop one small part, causing a nuclear weapon to launch, not to hit the Soviet Union where it would have killed huge numbers of human beings and triggered an apocalypse, but instead to launch into a nearby field. As Schlosser points out, a system in which such a thing is possible is itself broken. Blaming one maintenance worker misses the problem.

The film plays out the suspenseful minute-by-minute response in Damascus, Arkansas. We watch the people who invented the term SNAFU, the U.S. military, confront the possibility that they may be about to nuke Governor Bill Clinton’s Arkansas. Nobody with much useful knowledge of the weapon can apparently be found, but numerous people far removed from Arkansas get involved, and the most distant of them call the shots. The Keystone Cops, taking orders from afar, having locked themselves out of the missile silo, break their way back in but fail to prevent an explosion, after which they have to begin a search for the weapon, because — like the U.S. Army’s recently reported 6.5 trillion unaccounted for dollars — they don’t know where it went.

Harold Brown, then-Secretary of so-called Defense, is shown in the film saying that “accidents were not unusual in the Defense Department. There must have been several every day.” Most were, no doubt, not nuclear. But a “Defense” Department report lists thousands of those over the years.

A television newscast from 1980 informs us that “The Titan is not to blame. It was human error.” The Titan, apparently treated as an actual titan from ancient Greece, greater than a god, is the name of the inanimate weapon. The Pentagon and its media echo chamber defend the weapon from blame, choosing instead to put all the blame on members of the military.

This history of near misses with catastrophes is a well-kept secret. That the problem is structural rather than one of “a few bad apples” is a carefully avoided realization. And here’s an even better buried secret: this problem is not in the past. The United States still has some 7,000 nuclear weapons, and as this film shows us, and as is generally agreed, oversight and attention to safety have gotten worse, not better, over the years.

The non-nuclear nations of the world are pushing for a ban on nuclear weapons. The United States is expanding its nuclear arsenal. Which is the right way to go? In the words of that model of lawless U.S. violence Dirty Harry, you’ve got to ask yourself one question:


David Swanson wants you to declare peace at http://WorldBeyondWar.org. His new book is War No More: The Case for Abolition.