Gas industry pumps up BC Liberal election with $1M 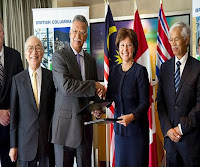 VANCOUVER - Research from the Wilderness Committee has revealed shocking details of how, since the last provincial election, fracking, gas pipelines and liquefied natural gas (LNG) companies have donated over one million dollars to the BC Liberals. Amid controversy over the role of political donations in BC democracy, the money injected into this election by the gas industry raises questions about the government’s ability to protect the environment.

“Here you have an industry that is poisoning our water, decimating the landscape and polluting the atmosphere, but the people charged to protect these public goods are instead playing cheerleaders for a massive expansion,” said Peter McCartney, Climate Campaigner at the Wilderness Committee.

“When this kind of money is thrown around in our democracy, it’s the environment that ultimately pays the price.”


Donations to the BC Liberals from fracking, gas pipeline and LNG companies have totalled $1,007,456 since the last election. Twin donations on Feb. 8 of $15,000 from Spectra Energy and $4,500 from Woodfibre LNG put the total over the million dollar mark.

“This industry receives billions of dollars in provincial tax breaks and subsidies from the very government they're paying to elect,” said McCartney.

“As someone who cares about the climate, that's depressing, but as someone who pays their taxes that's infuriating.”


When the government has a million dollar backing from an industry, local concerns struggle to be heard.

“We see time and time again this government side with frackers and LNG companies over the people they represent,” said McCartney.

“All this money in our politics sooner or later costs local communities and the global climate.”


Donations include $338,041 from Encana, one of the largest fracking players in BC’s northeast, and $114,540 from Chevron, which has a 50 per cent stake in Kitimat LNG. Other donations include $63,500 from Woodfibre LNG, who let Premier Christy Clark announce their final investment decision in November 2016.