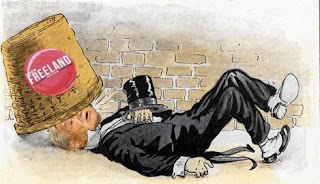 A Toronto newspaper has revealed that Canada’s leading Russia hater, Foreign Minister Chrystia Freeland, had a deal with George Soros (left) to write his biography after losing her journalist jobs at the Financial Times and Reuters, and before starting her run for election to the Canadian parliament.

On August 16 Toronto's Globe and Mail reported Soros is a “close friend” of Freeland, and that with her he has “very great hopes for Canada”.

Before she decided to run for parliament, the newspaper says Freeland had a “deal” for “a sort of authorized biography of George Soros”. Soros’s spokesman in New York, Laura Silber, refused to answer repeated questions last week for clarification of the terms of this deal or the compensation Soros agreed with Freeland.

Freeland’s first filing to the Canadian parliament’s ethics watchdog was registered on May 1, 2014. There is no mention of Soros, but there is “income received under a book collaboration agreement with an individual”. Freeland refused last week to identify that individual by name.

In her parliamentary filing on income and assets Freeland also mentions “speaking fees and honoraria” she received for “10th Annual Yalta Meeting, Yalta, Ukraine”. That’s a roundabout way of reporting that Ukrainian oligarch Victor Pinchuk’s eponymous foundation paid Freeland for her participation in the annual conference of his Yalta European Strategy (YES), an expensive lobbying effort to drive Ukrainian membership of the European Union and combat the Russian alternatives.

At the conference for which Pinchuk paid Freeland, others on the tab included Bill Clinton, Hillary Clinton and Tony Blair. For more detail on Pinchuk’s funding of an anti-Russian lobby effort in the US, and for the source of his funds in a Russian insurance company fraud, read this and this. Freeland and Pinchuk at YES.

Freeland refuses to say how much money she has received from organizations associated with Pinchuk.

She also won’t explain why in her list of assets, which she is required to file each year with the Canadian parliament’s Office of the Conflict of Interest and Ethics Commissioner, she has omitted to identify the asset she has publicly admitted to owning with her sister, an apartment in Kiev overlooking Maidan Square. This is Freeeland’s disclosure file and here is Freeland’s admission in February 2014 to Maclean’s magazine that she owns an apartment on the Maidan.

In March 2016, according to her parliamentary income and assets reports, Freeland filed what the Ethics Office calls a “confidential report”. The brief mention omits to say what has been kept a state secret, or why, except to conclude that “all initial reporting and compliance measures have been taken to comply with the Conflict of Interest Act.” Freeland was required to sell her company share portfolio.

Freeland’s concealment of the personal interests she and backers like Soros and Pinchuk share in their pursuit of policy towards Ukraine and Russia has not been investigated by the Canadian press or the parliament’s conflict of interest commissioner. The Financial Times management in London proved to be more inquisitive of Freeland’s closeness to the subjects of her reporting.

According to the Globe and Mail, she “clashed with editor-in-chief Lionel Barber”, and was ousted from her post in Europe, removed to New York in what was reported as “not a promotion”. Last week Freeland was asked to clarify whether the Financial Times investigation related to possible conflict of interest, and what the outcome was. She won’t say.

In Canada the Globe and Mail and other newspapers and media networks defend Freeland from the evidence that she has concealed her long family collaboration with the German Army occupation of the Galician region of Poland and Ukraine during World War II, and the family’s active support of the Galician programme for the liquidation of Poles, Jews and Russians. For more on that story, read this.

The promotion of ethnic cleansing for the installation of a Greater Galicia, centered in Lviv (Lemberg in German, Lvov in Russian) had a bloody history before Michael Chomiak, Freeland’s maternal grandfather, slipped out of Soviet Ukraine in 1939 and volunteered for training and service to the German occupation authorities in Cracow, Poland.

Newly read documents of Chomiak’s, including several discovered in Warsaw this year, establish that Chomiak and his family were rewarded by the Germans with apartment, car, and other assets all taken from Jews who were shipped to death camps. So high-ranking in the German programme for Galicia was Chomiak that he was evacuated by the German Army back to Germany in 1945. The Polish intelligence services were still hunting for Chomiak until the 1980s – without knowing he had fled for refuge to an Alberta farm in Canada; that continues to be one of Freeland’s real estate assets today.

The latest Globe & Mail report dismissed this history and Freeland’s refusal to address it, by calling it a Moscow operation to “to discredit Ms Freeland by making hay of unpleasant family history about her grandfather serving as editor of a Nazi-controlled newspaper.” The Globe and Mail reporter, Adam Radwanski, also comes from the family of a Pole, Piotr Radwanski, a eugenics specialist, who ended up in Baden-Baden, Germany, after the war ended, and then migrated to Montreal.

Freeland’s promotion of her grandfather’s programme for the military takeover of Ukraine as German, now Canadian policy, is one of several Galician operations in Ottawa. The family of Lieutenant-General Paul Wynnyk, appointed commander of the Canadian Army in July 2016, is from Stryi, 40 kilometres south of Lviv; his family’s record is “truly inspirational”, according to the Ukrainian-Canadian Congress.

The head of the Canadian Army’s force in Ukraine, Operation UNIFIER, is Lieutenant-Colonel Mark Lubiniecki, whose family also comes from the Galician region, and who was named to his Galician post in March of this year. The operational headquarters is at Starychi, 40 kilometres northwest of Lviv in an area notorious for its Ukrainian and German killing grounds of Jews and Poles.

Lubiniecki’s unit had been restricted to Galicia at the start of its deployment in 2015, but in March of this year Freeland and Wynnyk decided to extend their operational area eastwards.

“While Canadian troops are still required to stay away from the border with Russia and the fighting in eastern Ukraine,” Lubiniecki told a Toronto reporter, “the rest of the country is now fair game.”

On a visit to the Galician front in July, Wynnyk told the Ukrainian state news agency: “[W]e are also learning from our Ukrainian counterparts based on their recent experiences.”

“That’s what allies do for one another. They share lessons learned… That’s certainly what occurs between Ukrainians and Canadians.”


Another Galician is Canada’s ambassador to Ukraine, Roman Waschuk. His family comes from Ivano-Frankivsk and Buchach. Waschuk was posted to the Canadian embassy in Kiev in 1994-98, and then appointed ambassador in October 2014. As a youngster in Canada, Waschuk trained as a member of the Galician Plast youth organization.

In mid-August a report on the new evidence on Freeland was commissioned from me by a Canadian politician and former member of the Green Party, Dimitri Lascaris. He doubles as a reporter, interviewer and member of the board of directors of The Real News Network (TRNN), a provincial internet broadcaster in Baltimore, in the US. Lascaris (pictured below left) is supervised by Paul Jay (right), a former Canadian Broadcasting Corporation journalist and now editor in chief of TRNN.

Lascaris recorded a 30-minute interview with me on August 21. At first he delayed its broadcast, claiming he was “fact-checking”. Lascaris then claimed that Soros had issued a “definitive rejection” of the reported deal with Freeland, and cancelled the broadcast. He and his TRNN colleagues refuse to reveal the email exchange with Soros.

Lascaris added last week that he hasn’t had the time to check with Freeland on her side of the Soros deal, or her Ukrainian sources of income and real estate. His reason, he said, is that “both of my kids are leaving home to go to university and I am moving them into their new accommodations far from our home. I am not going to drop everything and neglect my family’s needs to respond immediately to your email.”