As we previously reported, a familiar pattern of staging a ‘chemical attack’ that provides the needed pretext for a missile strike on Syria appears to be in motion. 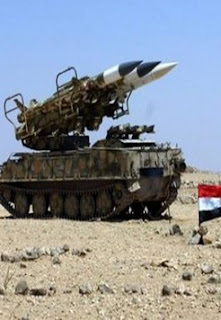 BEIRUT, LEBANON (4:30 P.M.) – Syrian air defenses have been placed on highest alert across the country, pro-government reporters claimed this afternoon. These reports seem to have some truth behind them because a source at the Mezzeh Airbase said that they have been ordered to make preparations for a possible attack on Damascus.

The reason for placing the air defenses on the highest alert was not revealed; however, it is believed to be due to the potential threat of a U.S. strike on the capital or its surrounding area.

Earlier this week, the Russian Ministry of Defense accused the U.S. and its allies of making preparations to attack Syria.

The Russian Ministry of Defense said that the rebels in Idlib are preparing to launch a chemical weapons attack and blame it on the government.

They said the U.S. will use this chemical weapons attack to launch strikes against the government.