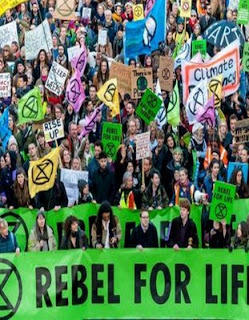 Howard Breen is a veteran activist and member of Extinction Rebellion Vancouver Island. On August 19 he was arrested while trying to make a citizen’s arrest of Liberal Environment Minister Catherine McKenna. He accused her and her government of environmental crimes.

By the end of the day, all charges against him were dropped.

He spoke to Socialist Worker:

Can you tell us a bit about your background. How did you come to be an environmental activist?

In my teens, I joined the Young Socialists and was active in student politics and the anti-Vietnam war movement. I became an elected executive member of the local of the International Typographical Union. Not long after, I became active in the nuclear disarmament and peace movements, against the cruise missile, NATO, DND, South African apartheid, OKA solidarity and the like.


In the eighties I escorted medical relief to Nicaragua, co-organized establishment of a peace camp on the Iraqi-Saudi border during the first Gulf War, and was deported from Israel for co-organizing a non-violent campaign in the Occupied Territories. Upon my arrival in B.C. in the early nineties I assumed several campaign director positions with environmental NGOs until my retirement. Today, I am most motivated by my children and grandchildren, and their generational right to a healthy and peaceful world.

Extinction Rebellion is much better known in Europe. Can you tell our readers what it is about?

In October of 2018 Extinction Rebellion formed in the UK to address the scientific consensus that predicted as many as 6 billion human lives were at risk of extinction by century’s end.

It soon sparked a creative world rebellion in the hopes of enabling transformative systemic changes in our political, economic and social landscape which might ultimately minimize the existential risks of climate, ecological and social collapse and transform society into one that is more compassionate, inclusive, equitable, sustainable and connected.

It now has over a million members, and hundreds of affiliate groups in over two dozen countries. It has four key demands:

1) Tell the Truth: Speaking truth to power and expecting reciprocation in kind;

2) Net zero carbon emissions by 2025 (being popular isn’t the mission, getting the job done is);

4) A just transition toward clean, renewable energy for everyday workers and families that puts people and the planet before profits, ultimately democratizing survival.


Is getting arrested a requisite for getting involved with XR?

No. But since the core mission of XR is to breakdown hierarchies of power for more equitable, autonomous, and decentralized participation in new democratic power structures, disruptive strategies and tactics are creatively employed which can lead to non-violent civil disobedience as the chief means to actively mitigating power relationships.

There are many important roles in creating a regenerative culture which is healthy, resilient and adaptable, and similarly in the tactical struggles of non-violent change of our toxic system of disaster capitalism.

Liberal Environment Minister Catherine McKenna was on Vancouver Island to announce new funding for conservation of endangered species. Why would XR activists disrupt that event?

The “flying squad” of the Extinction Rebellion Vancouver Island chapter was mobilized upon short notification that the Minister would be in town. When asked about the nature of the Minister’s visit, PR flacks only indicated that a greenwash sounding announcement would be made about a Parks Canada roundtable update.

Like last month’s successful action to disrupt Justin Trudeau appearance at a local election campaign fundraiser, the flying squad was activated as a citizens rapid response to challenge the presence of a Liberal cabinet minister responsible for multiple bitumen and fracked gas pipeline and terminal approvals (and in the case of Transmountain, a billion dollar purchase with public funds), and the deployment of RCMP tactical assault units to protect these fossil fuel projects, even those on unceded, unsurrendered ancestral lands of sovereign First Nations.

Indigenous title and rights, and the urgency and scale of social collapse as a consequence of the climate and ecological emergency was being politically and criminally ignored.

You were arrested during the event. What was your message? What were the charges? What are the repercussions?

As in the five other times I’ve been arrested in the past year, whether it was in an infrastructure lockdown, office occupation, bridge blockade, bank shutdown, super-glued to street pavement or executing a citizen’s arrest of a climate criminal, the message has been the same – no justice, no peace.

In every instance non-violent escalation was the objective and in each instance charges were ultimately dropped. Why? When the state and law enforcement understand a Canadian climate necessity defence win in a trial by one’s peers is our legal objective, smart politicians and Crown prosecutors have learned some hard lessons from other struggles.

They hope to suck the air out of national and local XR non-violent campaigns by avoiding movement martyrdom and election-timed political scandal at all costs (e.g. accused of Crimes Against Humanity i.e. S.2000 c: 241 of the Criminal Code). So they simply avoid show trials and dismiss such efforts as ‘exercise(s) in futility’ to quote one corporate media editorialist.

But we now understand that the most ineffectual way to change the system is to not upset people. So the good fight continues.

Proponents of strategic voting argue that exposing the Liberal environmental record will only lead to getting Andrew Scheer and the Conservatives elected. What do you say to that?

Strategic voting is a vote for business-as-usual and the continued electoral domination of the two interchangeable corporate political parties that have subverted Canadian democracy since Confederation.

Having been denied the Liberal electoral pledge of proportional representation it is now time to punish such a betrayal and vote for one of the progressive opposition parties in the hopes of creating a minority ruled government.

Does any party have an adequate platform for dealing with climate change and extreme weather?

I like various elements proposed by the NDP, Greens, and Eco-Socialists. Sadly, most rushed their climate platforms without a clearly stated goal of accelerated fossil fuel abolition and biodiversity recovery with adequate funding or policy timeline urgency pledged to achieve it.

We need sufficient Marxist, scientific and indigenous based foresight to minimize the long-term intergenerational pain to everyday Canadians by such shortcomings, hence my decision to prioritize organizing urgent political and economic transformation vis-vis disruptive system change versus electoral change-making.

There often comes a point in one’s life when a crossroads is met. We have all come to such a place today. We are the only human generation in history that has faced the challenge of avoiding becoming humanity’s last generation to save it.

There is a revolution coming because we no longer fear, fear itself. The only uncertainty is whether it will be too late. If it can’t be achieved nonviolently, it will surely be opposed violently as the carbon trafficking and arsonist elites continue to blindly drag us to our deaths by planetary life support terminal collapse and war. Only mass participation in mass civil disobedience can avert such mass destruction.

I urge your readership to join the people’s rebellion. Troublemakers can indeed change the world.
Posted by Gorilla Radio Blog at Tuesday, August 27, 2019