Canadian premier Justin Trudeau has had to prostrate himself with groveling apologies for past “racist behavior” when, as a younger man, he showed a penchant for donning turbans and skin-darkening make-up for school galas. 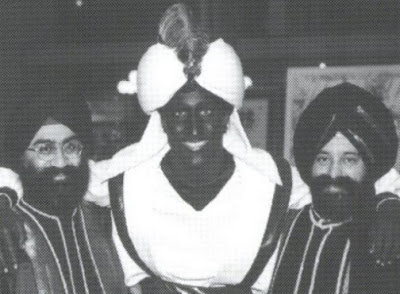 Fair enough, the self-proclaimed champion of “liberal values” should be subjected to a bit of public pillorying given that his youthful minstrel days of imitating people of color flatly contradict his more recent years of virtue-signaling.

Since Trudeau (47) was elected as prime minister in 2015, he has made a big deal about promoting human rights as well as gender and ethnic equality. On international relations, he talks about Canada having a “feminist foreign policy.”


At a superficial level, this guy is the apotheosis of lefty, liberal sensibilities. He shares a darling image among the liberal media along with France’s Emmanuel Macron. Both politicians are adept at using rhetoric apparently dedicated to social justice, ecology and internationalism. These guys are adored by the Hollywood-type ‘woke’ liberals and Me Too zealots as the embodiment of virtue, in opposition to the likes of uncouth President Donald Trump.

So, it is indeed amusing to see the squeaky-clean image of Justin Trudeau being dragged through the mud and for him to beg for forgiveness over past transgressions of his self-proclaimed values.

Nevertheless, the furore gripping Canada’s media and political class over Trudeau’s past seems to be way over the top.

Of course, with elections due next month, it is to be expected that opposition parties are exploiting bad publicity for the leader of the Liberal Party. Edging ahead in the polls is the Conservative Party, led by Andrew Scheer. He professed to be “extremely shocked and disappointed” by the racist make-up photos of Trudeau dating from nearly 18 years ago, when, as a 29-year-old, Trudeau had been working as a teacher at an elite private college before taking up politics.

Scheer said the photos showed Trudeau was “unfit to govern” and the prankish images called into question his judgement.

Other opposition parties have also joined the fray in lambasting the prime minister. The debacle may cost him his re-election bid.

However, surely the scandal is a storm in a teacup and riddled with hypocrisy among Canada’s political class. Conservative leader Scheer has recently been accused of turning a blind eye to growing racist and xenophobic ranks within his own party. The sound and fury over Trudeau’s past indiscretions bears a distinct sense of contrived outrage and self-serving sanctimony.

For on actually important issues of racism and human rights, the Canadian political and media establishment are all culpable of systematic denial. Take the issue of Canada’s indigenous nations. The Canadian state has balked at providing substantial reparation for centuries of persecution and marginalization. Arguably, the native populations were subjected to a policy of genocide by successive Canadian governments, which were dominated by European immigrants.

“It makes the mind spin and the stomach churn to learn that what has been going in Canada in the past century and more is similar to what the Nazis did in their concentration camps.”


He cites a recently published study on the institutionalized oppression towards Canada’s native inhabitants which documents forced detention centers, labor camps and stripping the people of their culture.


Canada’s political class has never made proper amends for their huge crimes driven by their sense the racial superiority of the white European settlers over the dark-skinned natives. This systematic policy of depleting the indigenous nations continues under all Canadian governments, including the doyen of liberal virtue, Justin Trudeau.

Two years ago, he gave a long address to the United Nations General Assembly, apparently calling out the misdeeds against indigenous tribes by past Canadian authorities. The speech was reported as a landmark ‘apology’ and proof of Trudeau’s altruism. But closer attention to his rhetoric shows the prime minister is agile at playing down the gravity of the issue. He talks about “past abuses” but not “crimes”.

As the lawyer Christopher Black puts it:

“In a nutshell, there has been a lot of rhetoric and nice words expressed on rectifying the ‘mistakes’ of the past, but overall the social condition of Canada’s indigenous people has not improved, nor have they attained the sovereignty they want. The institutionalized injustices rest pretty much unchanged. Trudeau pays lip service to their ‘rights’ but his government still holds with the policy of trying to force the indigenous people to disintegrate and cease to exist as a culture.”


One revealing indicator is the way the Trudeau government is in favor of pushing through the giant 1,150 kilometer Trans Mountain Pipeline. The project aims to transport crude and refined oil from Alberta province to the coastline of Vancouver, British Columbia. It has been criticized for its damaging impact on the environment and its encroachment on the historic land rights of indigenous Canadians, yet Trudeau is in favor of implementing the project in spite of his liberal rhetoric.

Another test case of Trudeau’s alleged virtuous integrity is the massive $11.6 billion-dollar arms sales to Saudi Arabia, involving the supply of 900 armored vehicles. Equipped with heavy-fire cannons, the vehicles have reportedly been deployed by the Saudi authorities in suppressing minority Shia communities in the east of the country.

Canada has also emerged as a keen supporter of US aggression towards Iran and Venezuela. Trudeau’s foreign minister Chrystia Freeland is a reliable surrogate for echoing Washington’s rabid Russophobia and hostility towards China.

To be sure, Justin Trudeau the supposed embodiment of liberal virtue and human rights is a pathetic fraud. The disclosure of embarrassing racist photos should be of little surprise, given what we know of his real duplicitous ‘inner-self.’

But Canada’s political class looks ridiculous for the superficial condemnations it is leveling against Pseudo-Trudeau. The Canadian state has plenty of racist blood on its hands both from national and international foreign policy conduct. These far bigger crimes and malfeasance is what Canada should be really red-faced about.