Daniel McAdams, the Executive Director of the Ron Paul Institute for Peace and Prosperity, was banned from Twitter last week. Officially, it was because he used the word “retarded” to describe the odious establishment propagandist Sean Hannity after noting the hilarious fact that the Fox News host had been wearing a CIA lapel pin while “challenging the deep state”.

Unofficially, it was because McAdams has been operating for years at the apex of one of the most effective antiwar movements in the United States.

An article from Liberty Conservative News about McAdams’ encounter with the business end of the Twitter censorship hammer reports that the outspoken foreign policy critic received a notification that his account “has been suspended and will not be restored because it was found to be violating Twitter’s Terms of Service, specifically the Twitter Rules against hateful conduct.”

“It is against our rules to promote violence against or directly attack or threaten other people on the basis of race, ethnicity, national origin, sexual orientation, gender, gender identity, religious affiliation, age, disability, or disease,” the notification reads.

“Additionally, if we determine that the primary purpose of an account is to incite harm towards others on the basis of these categories, that account may be suspended without prior warning.”


Now, unless Sean Hannity does in fact have some literal mental handicap we don’t know about, it’s not accurate to say that he was attacked or threatened on that or any other basis; rather, he was merely insulted with a common pejorative that is not widely considered to be politically correct. It is also certainly not accurate to say that the primary purpose of McAdams’ now-defunct Twitter account was to incite harm toward others based on the aforementioned categories.

Indeed, the article notes, the word “retarded” is used constantly on Twitter by users all around the world who never suffer any consequences for it; a quick Twitter search easily confirms that the word is used as an insult multiple times per minute. The reasons given for McAdams’ suspension can therefore be regarded as bogus.


In reality, McAdams was suspended because there are people on Twitter who, either due to profession or obsession, make it their business to report any effective opponent of western imperialism at every opportunity to Twitter admins, many of whom apparently have a clear pro-establishment bias of their own. It’s happened to me on more than one occasion, and we may be sure that it happened to Daniel McAdams last week as well.

Which is annoying. It’s annoying to know that at some point I’ll probably slip up and say something imperfectly in an increasingly restrictive speech environment which gets me permanently banned from that platform. I like Twitter. I’m good at it. I’ve recently concluded that it’s pretty much useless for dialogue, but it is a great way for one person to get unauthorized ideas seen millions of times per month by people who might not feel like reading an entire article. I’ll be very put off when the banhammer finds my pretty face. 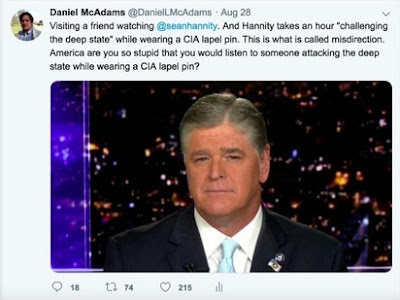 A society where a US president killing mountains of people around the world attracts more media attention than his rude tweets.

A society where being a warmonger is just as taboo and reviled as being a serial killer or a child rapist.

A society where people get their news from reporters who tell the truth about what’s happening, not from veterans of depraved intelligence agencies whose entire professions have been devoted to deceit and disinformation.

A society so sensitive to the horrors of war and the realities of its power dynamics that black bloc protesters would put more energy into disrupting appearances by people like Henry Kissinger and John Bolton than people like Milo Yiannopoulos.

A society so emotionally awake and empathetic in the way it operates that sociopathy and psychopathy become more of a disabling handicap than schizophrenia or bipolar disorder.

A natural society, the kind we imagined as small children that we would be inheriting, instead of this insane stew of oligarchic psyops and cultural mind viruses which rewards sociopathy and elevates social cannibals.


That society is already here in embryonic form, only hidden beneath a fog of confusion about what we are and where the stable ground of sanity is. Some of that fog was created accidentally, as the result of a species suddenly evolving extra brain matter at an unprecedented speed and stumbling out of the trees into a world of WiFi and processed meats. Most of the fog has been created deliberately, with countless generations of powerful humans inflicting narratives upon their subjects which further advantage the powerful and further disadvantage the powerless.

But sanity is right there, patiently waiting underneath the insanity. Waiting for us to open our eyelids and part the fog and remember our natural state. It’s right here, closer to us than our own breath, so simple and obvious that we can spend our whole lives overlooking it.

It’s that comfy homely chair where you can let your bum nestle into the folds of the earth, the vantage point from which you truly don’t mind what happens, you’re just curious as to what you’ll do next.

It’s that quiet still place from where inspiration bubbles up, just below the babble of the unreliable narrator of our patterned thinking mind.

It’s that place between sleep and at rest, right before the clamor of thoughts bustle in.

It’s right here, just below the surface of the made-up matrix of mind gunk.

This is the place from which our sane society will be birthed into the world.

Sink in and live from here whenever you remember to.


Let it be birthed through you.

The best way to get around the internet censors and make sure you see the stuff I publish is to subscribe to the mailing list for my website, which will get you an email notification for everything I publish. My work is entirely reader-supported, so if you enjoyed this piece please consider sharing it around, liking me on Facebook, following my antics on Twitter, throwing some money into my hat on Patreon or Paypal, purchasing some of my sweet merchandise, buying my new book Rogue Nation: Psychonautical Adventures With Caitlin Johnstone, or my previous book Woke: A Field Guide for Utopia Preppers. For more info on who I am, where I stand, and what I’m trying to do with this platform, click here. Everyone, racist platforms excluded, has my permission to republish or use any part of this work (or anything else I’ve written) in any way they like free of charge.