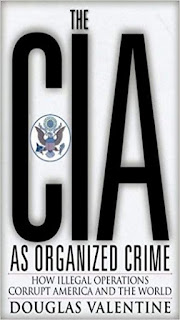 Q: In many countries, it is the intelligence communities that actually run and control the governments. What is the role of the intelligence services, especially the CIA, in the United States?

The process of converting "intelligence" gained on foreign adversaries into policy relies on an impenetrable barrier of secrecy. As Guy Debord said, secrecy dominates this world, foremost as the secret of dominance. This highly restricted process of access to information allows politicians, intel bureaucrats and their corporate partners in the arms industry 1) to turn Lies into Truth and 2) gobble up the lion's share of the US budget, at the expense of the general welfare of the citizens. This means the rich get richer and the poor get poorer, and the poor never have any idea what's really happening.

For example, as we now know, the Iraq War was based on a Big Lie, and the War in Afghanistan has been based entirely on a Big Lie for 18 years. But no one bats an eye, and there's no unified mass movement to make the government tell the truth, because the relentless psy-war that permeates public discourse creates a paranoid war culture where killing imaginary threats is venerated as the highest virtue. Americans believe America must always be the superior force, the dominator, and the intelligence agencies create the fictions that keep the “Dream Machine” churning.

We face the ultimate danger now. Trump, the abusive stud personified, with the help of Fox News and other right wing news outlets, has manipulated public distrust of "fake news" and a "deep state" to effect a Fascist coup. No one knows disinformation from misinformation anymore thanks to Trump. Many people, as a result, even believe the inherently fascist CIA and military are opposing Trump. Whether you believe the Big Lies or manage to see through them, we're all powerless prisoners within of the Spectacle - the contrived Great Delusion.

Trump has INCREASED the military budget, CIA operations are ever expanding. Trump has not impeded the military or intelligence establishments.

Q: At some point in the Syrian crisis, it was said that the CIA was planning to launch a fictitious attack together with white helmets to launch a chemical strike against the Syrian people so that get the Trump administration to start a war on Syrian government. To what extent can the CIA operate outside the command and supervision of the US President?

The CIA and military have "long range" strategic plans in place. For example, the military has 800 bases around the world to ensure that US corporations have access to foreign markets, and that the US military dominates the world. Trump will not close these military bases because they are in the economic and national security interests of the US and he wants the economy to do well. He closed one base in Syria to appease Turkey, but he kept the US military forces in Syria.

Trump has INCREASED the military budget - there are as many Navy warships patrolling the oceans, and as many warplanes flying over foreign nations, and as many nuclear weapons aimed at Russia and China as ever. In fact, there are more. Same with intelligence operations. CIA operations are ever expanding. Trump has not impeded the military or intelligence establishments. He has merely made charges against individual members of the military, CIA and FBI to secure his control over the minds of American citizens. The Empire marches on.

Q: What was the reason for Trump's clash with US security agencies, especially the CIA, and the lack of recognition of reports given to the president at the beginning of his presidency?

As I said, it's an illusion. He is the president, the Commander in Chief, he runs the security agencies. He tells them what to do and they salute and do it. Some members of the security agencies suspect Trump of being a wannabe dictator and a Russian agent. It's also thought that he laundered money for the Jewish branch of the Russian mafia starting as early as the mid-1980s. And it's possible he did, wittingly or unwittingly, as part of a long range CIA operation designed to install corrupt oligarchs in the USSR as part of a strategic plan to corrupt and subvert the USSR.

Trump is exactly the sort of greedy hustler the CIA would use in such an operation. If it is true, then Trump is a protected person who is blackmailing the CIA. The CIA can't reveal that he worked for them in this illegal operation involving drug money. Nothing about his relationship with the CIA could ever be made public. Many CIA employees may object to a freak of nature like Trump lording it over their agency. But no one who knows could ever tell.

That appears to be true, in part. Iranian scientists were murdered. But Trump has not reduced economic warfare and psy-war operations against Iran. He sabotaged the nuclear agreement and isolated the nation. And I believe he has gotten the MOSSAD more deeply involved in US intelligence operations, domestically as well as overseas in Iran. Witness his relationship with Netanyahu and his status as a hero in Israel, which considers Iran an existential threat. I could elaborate, but it's all speculation.

Q: Few years ago, various publications wrote about Michael D'Andrea, who was in charge of Iran in the CIA, please described how capable this person is and how capable he is to act out of the general structure of CIA against Iran?

I cannot comment on D'Andrea. I do know the CIA hires psychopaths capable of committing any crimes, and then puts them in charge of operations like the ones D'Andrea ran and is currently running.

Q: In the Obama administration, a person named David Cohen went to the CIA from the Treasury Department. To what extent can the CIA play a role in sanctions against Iran?

It plays a defining role. As I mentioned, it conducts unstated policy. It has secure lines of communication with the Iranian government and can negotiate terms of any settlement without the media or other part of the government knowing.

It can secretly through agents inside the Iranian program and through electronic intercepts determine what Iran is doing, from Iran's strategic plans to the details of its nuclear program. That's intelligence. It can also disrupt whatever Iran is doing through a variety of methods.

The assassination is meant to terrify the leaders in Iran and deter them from attacks against Americans and Israelis.

Q: Why did Trump go against his previous practice and directly assassinate the Iranian authorities?

I absolutely disagree that the assassination is a departure from Trump’s policy. I have no idea why you would say that. Trump is on record saying he believes in assassination, including killing the families of his targets. Plus which drone strikes, which are the primary instrument of CIA selective terror and assassination, have increased under Trump.

Q: What would be the consequences of such a decision for the US government?

Trump’s assassination of a High Value target is an act of psychological warfare, in this case aimed primarily at the US public and Israeli publics. 1) It allowed Trump to deflect attention from the impeachment scandal. 2) It assured his American and Israeli followers that he is predatory, with the willingness to kill without remorse.

It is also an act of selective terror directed at Iran. The assassination is meant to terrify the leaders in Iran and deter them from attacks against Americans and Israelis.

Thanks for your time
Posted by Gorilla Radio Blog at Saturday, January 04, 2020