Joan of Arc, President Obama, and the Dark Ages 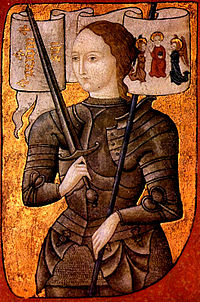 Today, May 30, 2015, is the 584th anniversary of the day on which Joan of Arc was burned at the stake by the British forces occupying France.

The "Maid of Orleans" had the ill luck to be captured while she was rallying her countrymen to throw off the English yoke and a pro-English Bishop, Pierre Cauchon, after a grossly unjust trial, sentenced her to death by fire.
"Bishop, I die through you!" she reportedly told him.

Saint Joan, as she is known since her canonization by the Roman Catholic church, was only 19. Despicable as the Bishop's conduct was, he at least made a pretense of a legal proceeding.

Contrast this with the conduct of President Barack Obama, who likely may be responsible for the drone killings of more than a thousand innocent civilians across the Middle East, and who dispenses entirely with legal niceties.

How is it that Bishop Cauchon is reviled for a single murder yet President Obama routinely wipes out human life on a grand scale and is not prosecuted?

Perhaps an indifferent American public is proving Soviet tyrant Joseph Stalin correct when he told U.S. ambassador to Moscow W. Averell Harriman, "The death of one man is a tragedy, the death of millions is a statistic."

The Bureau of Investigative Journalism(BIJ), London, a non-profit organization known for its meticulous research, reported last month that 515 U.S. drone strikes since 2002 have killed at least, 2,887 people in Pakistan, Yemen, and Somalia.

The drone strikes, inaugurated by President George W. Bush, "increased during the Obama administration as did the number of casualties," the BIJ reported. And McClatchy news service, citing a leaked CIA document, reported "the CIA killed people who only were suspected"" of association with militant groups.

"The 'honors' graduate of Harvard Law School President Obama has set himself up as the sole Judge, Jury and Executioner of thousands of human beings in violation of international law, human rights law, the laws of war and the United States Constitution. Harvard Law School taught me that makes Obama a felon and a war criminal and impeachable."

The president openly admits authorizing the drone killings. As pacifist/author David Swanson of Charlottesville, Va., pointed out in his book "War No More," Obama killed Anwar al-Awlaki, an American citizen, who "was never charged with a crime, never indicted, and his extradition never sought." Indeed, many of President Obama's drone victims could have been arrested and tried had the U.S. gone to local authorities with evidence of their culpability. We need to ask ourselves,

"What kind of nation prefers to murder people without a trial? Would you call it Fascist, Communist?"

Swanson cites figures to show that, in Pakistan alone between 2004 and 2013, America made 372 drone strikes, killing between 2,566 and 3,570 individuals, of whom as many as 890 were civilians, including nearly 200 children---every one of them by definition---younger than Joan of Arc.

Imagine, on this 584th anniversary of her death, a nation called America, a country whose evil genius has invented the deadliest killing machines ever, a country spending a trillion dollars a year on war, with 1,000 military bases overseas, and 11 battle fleets patrolling the Seven Seas, and troops in 175 countries, and with its lying spokespersons claiming it is all for 'defense,' is turning the clock back to the Dark Ages.

Apparently, Americans have lost their sense of proportion, their ethics, their faith, their humanity, and worst of all, even their pity for the victims of their crimes. Saint Joan, be with us today!

Sherwood Ross worked as a reporter for the Chicago Daily News and contributed a regular "Workplace" column for Reuters. He has contributed to national magazines and hosted a talk show on WOL, Washington, D.C. In the Sixties he was active as public relations director for a major civil rights organization.