"This Is What Neofascism Looks Like"
by Matthew Rothschild

Republicans and their media outlet, Fox News, have encouraged rightwing violence in recent years -- and intensely so since the 2008 presidential election. In the incidents during this past week, we may have seen a prelude to something that could grow much worse.

The rightwing violence we’ve been witnessing this past week in America may be a prelude to something much worse.

The hideous and bigoted slurs aimed at Representatives Barney Frank and John Lewis; the spitting on another black Representative, Emanuel Cleaver; the throwing of bricks through the windows of other legislators’ offices; the cutting of a gas line at the home of the brother of a legislator; the lynching threats; the assassination threats; the mailing of a shredded American flag doused in gasoline: All of these incidents are the acts of modern-day brownshirts. This is what neofascism looks like.

Republicans have been tardy and muted at best in criticizing such criminal acts. And at worst they have said nothing, or have even egged on the criminals -- as with Sarah Palin’s putting cross-hairs on a map where she has targeted Democrats, with the reckless message:

And far from distancing himself from Sarah Palin, Senator John McCain invited her down to Arizona to campaign for him. And he has defended her rhetoric on the Today Show this week, saying her choice of words was “fine.”

House Minority Leader John Boehner also pulled away from the madding crowd. "Violence and threats are unacceptable. That is not the American way," he said on Fox News. "Yes, I know there's anger, but let's take that anger and go out and register people to vote, go volunteer on a political campaign, and let's do it the right way."

Republican Senator Chuck Grassley chimed in: This “is not what should be going on in America. We should have respect for other peoples’ opinions.”

But then there is House Minority Whip Eric Cantor, who not only stretched the truth about a bullet he said was aimed at his office. He also said Democratic leaders “are dangerously fanning the flames by suggesting that these incidents be used as a political weapon.”

But it has been Republicans and their mouthpieces on Fox and talk radio who have been fueling the hatred around the country. They can try to distance themselves from it now, but the damage has been done.

There is, across the land, a level of vileness we haven’t seen in this country in four decades. And this vileness, as history shows us, can lead to even worse acts of violence.

When 14 percent of Americans in a recent poll believe that President Obama may be the Antichrist, you have to worry for his safety.

It would not surprise me in the least if someone tried to gun down President Obama—or Speaker Pelosi, for that matter, so demonized is she in rightist circles.

The wise author Chris Hedges has been warning us for a couple years now about the rise of neofascism in America. Recently, he wrote, “We stand on the cusp of one of the bleakest periods in human history when the bright lights of a civilization blink out and we will descend for decades, if not centuries, into barbarity.”

This past week may mark the beginning of that descent.


Matthew Rothschild is the editor of The Progressive magazine. 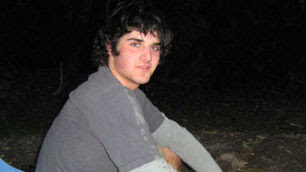 Motorcyclist Orion Hutchinson was killed in the collision with the Jeep. (Family photo)
March 23, 2010

A Delta, B.C., motorcyclist killed in a collision with an RCMP officer's Jeep two years ago was impaired and speeding at the time of the crash, a coroner's investigation has determined.

The actions of both drivers, Orion Glenn Hutchinson, 21, and RCMP officer Cpl. Benjamin (Monty) Robinson, played a role in the collision, a report by the B.C. Coroners Service concluded.

Hutchinson was likely killed almost immediately by injuries he suffered when his motorcycle slammed into a Jeep driven by Robinson on a street in the community of Delta, south of Vancouver, on Oct. 26, 2008, the report said.
Speed, alcohol blamed

Coroner Mark Coleman concluded that speed and alcohol on Hutchinson's part were also contributing factors to the accident.

The motorcyclist had an alcohol level above the legal limit and was travelling between 66 km/h and 96 km/h when the collision occurred, Coleman concluded.

Robinson was making a left-hand turn and moving between 24 km/h and 29 km/h at the time of the crash, the coroner said.

"I classify this death as accidental and make no recommendations."
Officer charged

Robinson, who was off-duty at the time of the collision, identified himself to witnesses before leaving the crash site with his two children to take them to his nearby home.

He later testified that he had two shots of vodka before returning to the crash scene and failing a Breathalyzer test.

Delta police recommended a charge of impaired driving against Robinson, but the Crown decided not to proceed. Instead, he was charged in December 2009 with attempting to obstruct justice. The case is still before the courts.

Robinson was suspended with pay following the crash.

He was also the most senior of the four Mounties involved in the Taser death of Robert Dziekanski at Vancouver airport in October 2007.