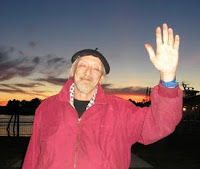 When John Ross left Terminal Island, the federal prison in Los Angeles, after serving a couple of years for refusing the Vietnam draft, the warden shook his head and said: "Ross, you never learned how to be a prisoner."

I'm not writing the epitaph for whatever gravestone he has or doesn't have, wherever it might be in the world, but that's what I'd put on it: "John Ross, 1938-2011. Never learned how to be a prisoner."

John, who died over the weekend, was a poet, author, activist, agitator and uncontrollable shit disturber, utterly and sometimes insanely fearless, pure of heart and devoted to the cause of social justice so deeply that he could never let up, even for a minute. He was also my friend.

John was a tenant organizer in San Francisco in the 1960s. He ran for supervisor once on a platform of rent control and ending the war; he was kicked off the ballot on the basis that he was a convicted felon. He never got his filing fee back.

After a while, he headed north for Arcata, back to the land, so to speak, and became something of a farmer. He wrote poetry, self-published maybe half a dozen books, most of which I have, some of which are probably lost forever. He wrote freelance for the Guardian, but he had no phone; you'd call him at a bar in Arcata (he swore later that Thomas Pynchon was one of his barmates), leave a message and he'd check in when he got it.

Then in 1984, he showed up at our office in San Francisco, fleeing the Campaign Against Marijuana Planting, which had raided his plot, trashed his house, thrown his typewriter out the window and missed capturing him by a few minutes. He sold the last of the crop in the city, found a room and started writing for us regularly.

He was one of the single most talented writers I've ever met -- and a reporter willing to go anywhere for a story. He was also an absolute pain in the ass to work with. Every John Ross story I ever edited was a nightmare. He hated editors, almost as a matter of religion; every single word was sacred, and anytime I tried to mess with what he'd created he'd threaten to quit. "Take my name off the masthead; I'm never working for you again" was almost a mantra with us. It got to the point where I had to say: No, John. You can't quit. You're part of this operation forever, like it or not. And he always came around.

But it's not a surprise that he never held down a real job for long.

Sandy Close at Pacific News Service sent him to Mexico City after the big earthquake in 1985, and he wound up at the Hotel Isabel, where he lived for the next 25 years. He took on stories nobody else would do or could do; he'd go places nobody else would dare. "Tim," he'd always tell me, "you have to go where the story is."

When the Zapatistas began their rebellion, he hitched a ride south from Mexico City, then hiked into the hills in Chiapas with a bag of granola and a couple of bottles of water, found the rebels in a little hamlet, met Subcommander Marcos and got interviews and information that left the rest of the media in the dust. In the first story he sent me, he described seeing a couple of reporters from the San Francisco Chronicle zipping by in a fancy rented jeep, with about $1,000 worth of camera gear, totally befuddled. They were out of their league; John was right at home.

He called me once, late at night, to ask if I knew any doctors in town. Turns out he'd been beaten pretty badly by the Mexican authorities just before getting on a plane to SF. I asked him how it happened, and he told me that he'd decided, on his own, to stand in the Mexico City airport and make a speech denouncing the government. The cops didn't respond kindly.

He went to Iraq before the war to serve as a human shield in Baghdad (his emails were all signed "John Ross, humanshield"), left after having some clashes (imagine that) with his Iraqi government minders, travelled all over the world writing and selling his books, sent me pieces from everywhere, lost his eye to an old injury from fighting with the SFPD (his email signature became "Juan Eye"), won and refused an award from the City of San Francisco, wrote a major investigative piece on the death of journalist Brad Will and kept writing until the very end. When he was diagnosed with terminal liver cancer, he started signing his emails "John Ross, not dead yet."

The last message I got was on Nov. 4. After complaining some more about the cops, he wrote:

"it appears ive written my last articles for the bay guardian -- the doctors have given me six months on the outside and then its goodbye this cruel world -- we raised some hell when i was here." It's signed: "in solidarity johnross enroute."

Yes, John: We raised some some hell when you were here. Good luck enroute. And I will miss you forever.

You can read some of John's recent articles here and here and a lot more here.

Posted by Gorilla Radio Blog at Sunday, August 28, 2011 No comments: