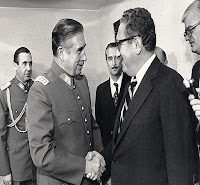 Quite revealingly, the self-proclaimed crusader against genocide, Samantha Power, was awarded the 2016 Henry A. Kissinger Prize in Berlin.

That Power would be awarded a prize named after one of the world’s great génocidaires, and that she would happily accept it, proves what many of us have believed all along – that she is more the clever apologist for U.S. crimes than a bona fide human rights advocate.

The problem with Power all along has been that her refusal to acknowledge the incontrovertible fact that the U.S., as exemplified by such figures as Henry Kissinger himself, is in reality the world leader in war crimes commission, and an active facilitator of genocide. The U.S. is not, as Power has claimed throughout her career, a force for halting such evils. However, Power has done an impressive job in advancing this myth, and in the process in perpetuating the false belief that the world would be better off if only the U.S. were more active militarily throughout the world. In so doing, Power, who is lauded as some great human rights advocate, probably does more than any other public figure to harm the cause of global human rights.

Power’s acceptance speech, entitled, “Remarks on ‘Twenty-First Century Realism’ at the Awarding of the 2016 Henry A. Kissinger Prize,” is very illustrative of the delusions Power promotes in the interest of U.S. power projection and the grave harms done by this projection. [1]

First of all, Power, in full agreement with Kissinger, condemns what she refers to as “the rise of extremist and isolationist voices in the U.S.” who dare challenge “the internationalist assumptions that have undergirded U.S. foreign policy across party lines since the Second World War.” This statement is pregnant with meaning and deserves some dissecting.

As an initial matter, it is stunning that Power would characterize those who call for the U.S. to stop, or even slow, its aggressive, interventionist policy around the globe as “extremist” when it so clear to any rational observer that it is this interventionist policy itself which is so extremist as to be insane.

Indeed, it is hard to point to any great successes, especially in terms of human rights, that the U.S.’s post-WWII “internationalism” (I would prefer to call it imperialist aggression) achieved, and Power in her speech tellingly does not point to even one such success. And, how could she with a straight face? The innumerable U.S. interventionist adventures since WWII have done nothing to advance human rights or even national security, at least if national security means the protection of U.S. citizens like you and me.

Rather, the U.S.’s “internationalism” has consisted of overthrowing constitutional democracies in countries like Iran (1953), Guatemala (1954), Chile (1973), Haiti (2004), Honduras (2009), just to name a few. It has consisted of carrying out mass slaughter in an attempt to put down national liberation struggles, for example in Vietnam and in Southern Africa, costing the lives of millions. And, it has involved sewing instability throughout Northern Africa and the Middle East, in such countries as Libya, Afghanistan, Syria, Yemen and Iraq.

Power’s complete blindness to such realities – though she ironically entitles her speech, “Twenty-first Century Realism” – is hard to fathom. For example, she explains the current rise of ISIL in Iraq as the product of “the deeply sectarian, corrupt, and abusive rule of Prime Minister Maliki . . . . “ There is no mention, however, of the 1991 and 2003 military interventions in Iraq by the U.S., nor of the intervening sanctions regime, which destroyed the social fabric of that country and left hundreds of thousands of civilians, including at least half a million children, dead. No, those acts of “internationalism” apparently do not deserve even a mention in Power’s distorted view.

In addition, Power does not mention the U.S. intervention in Libya in 2011, though that was an intervention which she and her soulmates Hillary Clinton and Susan Rice played a key role in bringing about. Again, the undisputed result of this intervention has been instability in Libya and surrounding countries, such Mali and Tunisia, and the accompanying rise of armed extremist groups in those countries. But again, this deserves no mention. Instead, Power attempts to explain the “instability roiling the Middle East” as the product of almost mystical forces beyond the purview of the U.S., thus criticizing those who would “presume that the United States had within our control to put the Arab Spring genie back in the bottle . . . .”

Power, repeating her long-time refrain which has given her the reputation as a human rights advocate, ends her speech by stating that “we no longer live in an era in which foreign policymakers can claim to serve their nations’ interests treating what happens to people in other countries as an afterthought. . . . What happens to people in other countries matters. It matters to the welfare of our own nations and our own citizens.” Of course, there is nothing particularly profound about this statement, and it would be hard to find many who would admit to disagreeing with it.

However, as with all Power says, what is absent is any discussion about how the actions of the U.S., and of even of Power herself, has undermined the welfare of people in other countries. For example, in addition to her role in pushing for the disastrous intervention in Libya, Power has also been active in giving diplomatic cover to the U.S.-backed Saudi slaughter in Yemen which continues to this day. Thus, in an episode quite reminiscent of those she criticizes in her Pulitzer-prize winning book, A Problem From Hell, Power helped the Saudis scuttle a resolution at the United Nations that called for an investigation into the civilian toll of the Saudi coalition war against Yemen [2], in which at least 6,000 civilians have been killed and 14 million civilians find themselves on the brink of starvation. In the end, even for Power, whether “people in other countries matter” inevitably depends upon who the people are, and whether the state impacting their interests is a friend of the U.S. or not.

In short, Power is really the perfect exemplar of U.S. foreign policy. She is a hypocrite and a phony idealist who believes her own lies about the role of the U.S., and even herself, in the world, and who does a great job of convincing the public that these lies are truth. But sadly — like Kissinger himself who will never be able to wash the blood of the Vietnamese, Cambodians, Laotians, Chileans, Argentines and East Timorese off his hands, but who nonetheless is treated as an elder statesman — Power will most likely never be brought to account. She will continue to live out her days watching Boston Red Sox games and hanging out with the rich and powerful, while other, lesser criminals are sent to The Hague. Regrettably, this is what passes for human rights these days . . . .