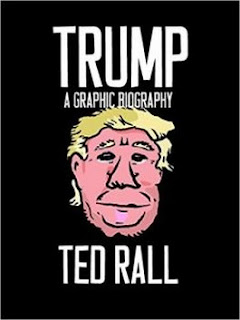 In July of 2015, Charlie Beck, Chief of the Los Angeles Police Department, colluded with publisher of the Los Angeles Times, Austin Beutner, to terminate Ted Rall from his position as principal Editorial Cartoonist at the LA Times.

Their purpose: to censor Rall's criticism of police brutality and corruption.

Now, Ted is suing the LA Times, and needs to raise $75,000 in one week to keep the wheels of justice turning.

The LAPD and specifically Beck have been the target of numerous critical Rall cartoons since 2009. In 2015, Beck illegally passed documents to the LA Times which supposedly proved that Rall had lied about a police encounter in 2001. 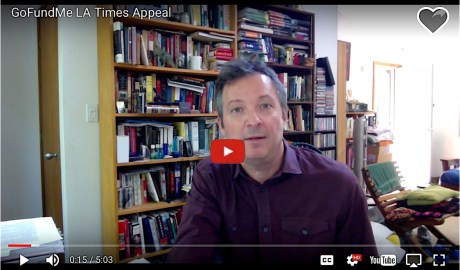 These documents were carefully cherry-picked in order to misrepresent the truth and smear Rall. Rall was nevertheless fired within less than a day, without an investigation, without consulting his editors, without even being brought into the office to discuss what really happened in 2001.

Not only this, Beutner’s corporation has a history of colluding with police to fire critical journalists. At the San Diego Union-Tribune in 2009, "anti-cop" members of the editorial board were targeted for dismissal after the LAPPL police union bought stock in the company. At the time of Rall's firing, the LAPD union was the #1 shareholder of Tribune Publishing, the parent company of the Los Angeles Times. (They even gloated over Rall's firing on their blog.)

To defend his account of events, Rall hired an audio company to analyze the police audio tape used to fire him. Extensive analysis revealed that Rall had been telling the truth about the encounter all along, but the Times provided no comment and no retraction until three weeks later, when they conducted their own analysis which found less evidence on the tape. It later turned out that the Times had again lied to their readers about what exactly their experts had discovered.

Even after Rall provided copious exonerating evidence to the Times, an Editor’s Note remains online that states the Rall falsified his claim, injuring his professional journalistic reputation. So does a second Times screed doubling down on their false claims.

Now, Ted is suing the LA Times. As they've tacitly conceded in court, the Times has no legitimate defense, so they're trying to bully their way out of the case going to court.

All Ted wants is for a jury of his peers to hear his story. He is certain that they will agree that what the Times did was illegal. Before that can happen, however, Ted has to get past California's notorious "anti-SLAPP" law. Anti-SLAPP was originally passed in order to protect small-time individuals from frivolous defamation lawsuits by deep-pocketed corporations. In this case, however, the Times is abusing the statute to try to bankrupt Ted into a "pay to play" legal maneuver. Under anti-SLAPP, Rall has to prove that he is likely to prevail in his lawsuit before he begins depositions, discovery, and the actual lawsuit process.

The Times has completely backed away from their assertions that Ted lied, as they realize that they have made a huge mistake. Now, they’re trying to prevail through technicalities. The Times has filed a motion demanding that Rall post a whopping $300,000 bond. This is in case the Times wins their disgusting anti-SLAPP motion, which would allow the Times to be awarded their attorneys' fees...to be paid for by Ted.

Fortunately, the judge ordered the amount reduced to $75,000. Still, that's a lot of money. It's a lot more money than Ted, who earned $300/week from the Times, has access to.

Which is where you come in.


If you contribute to this campaign, you'll not only be contributing to a valiant fight against corruption, you'll also be helping Ted's lawsuit move forward against these disgusting legal maneuvers. Unless he comes up with the $75,000 within a week, the lawsuit will be automatically dismissed. If he does come up with it, there will be a hearing next summer about the defendants' anti-SLAPP motion. If they win, the money will be gone and lawsuit will be over.

But that's not what we think is going to happen. We think the judge is going to see things our way. That's why Ted's attorneys took this case – a very expensive and complicated case that's going to require a lot of work – on a contingency. They believe in it. If we're right and we prevail against their motion, the money that you pledge here will be returned by the court and we will return it to you. Of course, there's always a chance that we will lose. There's no telling how a judge will rule.

Your pledge helps to keep our fight going. Your pledge tells the LAPD and other police agencies that interfering with the free press and with editorial commentary is not acceptable behavior. Your pledge tells newspapers that kowtowing to local authorities and law enforcement is a violation of their public trust.

Help Ted get justice and show the media that journalists cannot be bullied!

Here’s What You Will Receive Depending On Your Level of Support:

Donate $20 or more:
Aside from my eternal gratitude, you'll receive a one year subscription to the Ted Rall Subscription Service, which gets you all of my cartoons emailed to you every week.

Pledge $35 or more:
You'll get a PDF of one of my three recent political biographies: either of Edward Snowden, Bernie Sanders, or Donald Trump. Also includes a one-year subscription to the Ted Rall Subscription Service, which gets you all of my cartoons emailed to you every week.

Pledge $50 or more:
Receive a print copy of one of my three recent political biographies of Edward Snowden, Bernie Sanders, or Donald Trump. Also includes a one year subscription to the Ted Rall Subscription Service, which gets you all of my cartoons emailed to you every week.

Pledge $100 or more:
Ben Franklin wasn't just one of the fattest founding fathers, he was one of the first people to print periodicals in the English colonies. At Ben Franklin level, you receive a copy of one of my recent political biographies of Snowden, Bernie, or Trump, and it will be signed personally, with a small drawing, to the person of your choice. Also includes a one year subscription to the Ted Rall Subscription Service, which gets you all of my cartoons emailed to you every week.

Pledge $500 or more:
For $500 you get the original artwork/line art for one of my recent syndicated editorial cartoons. I'll personally dedicate it to anyone you want. Also includes one of my recent political biographies, signed personally to the person of your choice. Also includes a one year subscription to the Ted Rall Subscription Service, which gets you all of my cartoons emailed to you every week.

Pledge $1,000 or more:
I will draw a single panel cartoon about any topic that you want. In addition, I will throw in my three recent political biographies, signed personally to anyone of your choice. Also includes a one year subscription to the Ted Rall Subscription Service, which gets you all of my cartoons emailed to you every week.

Pledge $5,000 or more:
I will draw a multi panel cartoon about any topic that you want and consult you about the details of the cartoon, and include you as a character inside the cartoon. In addition, you get the three political biographies, signed, of course, as well as one original piece of syndicated editorial cartoon art. Also includes a one year subscription to the Ted Rall Subscription Service, which gets you all of my cartoons emailed to you every week.

Pledge $10,000 or more:
“Tronc" is the weird new corporate name for the Tribune Company. Austin Beutner is the billionaire who conspired with the LAPD to smear me. At Super Tronc level, you'll receive everything at the $5,000 level plus, AND I will join you and your friends for dinner anywhere in the United States.

Pledge $75,000:
If you can cover the whole shebang, you get everything above, plus I will spend two full days hanging out with you anywhere you want in the United States. Click Here to Contribute and Defend Ted Rall

Ted Rall is a fellow of the Palast Investigative Fund. He is the author of the New York Times bestselling graphic book biography of Bernie Sanders, Bernie.

Get your signed copy now!

Ted Rall has just released his new graphic book biography of Donald Trump, Trump.
Get a signed copy now, or get it on Amazon, Barnes & Noble or Indiebound.