For your reading pleasure Mondays and Fridays 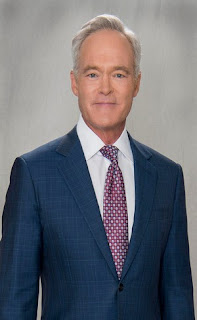 Finally, you’re left with image of Scott Pelley sucking on his eyeglass frames as if he was trying to impersonate a character who might be called The Ole Sage TV Journalist, after neatly disgracing both himself and TV journalism in his puffy chat-up with Andrew McCabe, the ex-Deputy FBI Director who stage-managed the cover-up of the RussiaGate fiasco in both of its phases — first to interfere with the 2016 election on behalf of Hillary Clinton, and then to oust the winner of the election, Mr. Trump.

Perhaps Mr. Pelley, (left) was ruminating on all the topics he forgot to ask about, such as what Mr. McCabe meant by an “insurance policy” in his conversations with counter-intel agent Peter Stzrok and DOJ lawyer Lisa Page; or whether Mr. McCabe launched the Russia collusion investigation on the basis of the Steele dossier, which was already known at the time to be material furnished by the Hillary Clinton campaign; or whether the contents of said dossier had ever been verified via established FBI protocol (the “Woods” procedure), which they never were.

The audience was informed at the very end that Mr. McCabe’s case had been “referred” to the federal courts by the DOJ Inspector General. That was a nice way of saying that Mr. McCabe has been singing to a grand jury. If so, then he’s an early bird, because many of his feathered friends will be following him into the grand jury chamber and then we’ll have the great Battle-of-the-Alibis.

Mainly what the McCabe interview accomplished was CBS tripling-down on the empty Russia collusion “narrative” that has nourished the crusade to dump Mr. Trump by any means necessary for more than two years. Mr. McCabe describes the “chaos” in the C-suites of the FBI after the President fired Director James Comey in May 7 of 2017, “because we had lost our leader… it was an unbelievably stressful time,” he said.

Yes, I’m sure. Because so many top officers in the Bureau were desperate to cover their asses since Mrs. Clinton’s unbelievable election loss meant that all the FBI emails and official memoranda documenting their behavior either had to be shoved down the memory hole illegally or left to be discovered by Mr. Trump. Indeed, some of it was illegally destroyed, for instance the government-issued cell phones of Ms. Page and Mr. Stzrok, smashed to bits on Robert Mueller’s instructions.

Apparently, one of the main objectives in the 60-Minutes story was to paint Mr. McCabe as a heroic patriot defending America against the wicked, shape-shifting, all-powerful Russia, which had made Mr. Trump its captive. The 60-Minutes piece happens to coincide exactly with the release of Mr. McCabe’s ass-covering book: The Threat: How the FBI Protects America in the Age of Terror and Trump. (Real superheroes fight both.) 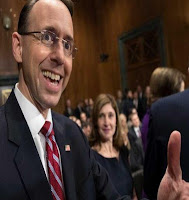 It also sets up a nice contrapuntal battle between the enigmatic Rod Rosenstein and Mr. McCabe vis-à-vis the idea of “wearing a wire” to record the President en route to running him over with the 25th Amendment. According to Mr. McCabe, there was a lot of lively discussion around this plan. Mr. Rosenstein, (right) has brushed it off as a gag. Mr. McCabe, apparently, thought it was dead serious. They never did get their stories straight.

In the meantime, Mr. McCabe’s own colleagues in the FBI’s ethics office and its Inspector General charged him with lying repeatedly about his role in this matter.

You had to wonder whether the attempt by CBS-News to sell “the sterling career” story of Andrew McCabe (as Mr. Pelley put it), is really just a way for the network to cover its own ass in acting as a propaganda patsy in the long-running RussiaGate affair. The 60-Minutes segment also coincided with William Barr’s confirmation last week by the senate as the Attorney General, as well as official reports issued by both house and senate committees stating that they found no evidence for the Trump / Russia collusion story. The ground is shifting under all this seditious hugger-mugger.

Whether you are a Trump cheerleader or not (I’m not), there is a reality-based chain of events behind the FBI’s actions from early 2016 on — and the actions of other official players in government — that can only be clarified now in the courts, and chances are pretty good that they will be. It concerns me because the specter of massive institutional failure in federal law enforcement and the news media bodes very darkly for this country’s future.
Posted by Gorilla Radio Blog at Wednesday, February 20, 2019