The Trouble with Greta: Not Surrendering to Youth and Hopeful Exuberance

In addition to the unprecedented giveaway of the people’s assets to multi billionaires that is outlined in the green new deal, when can I expect regime change for climate, bombing for climate, imperialist words for climate compulsory sterilization for climate, etc. 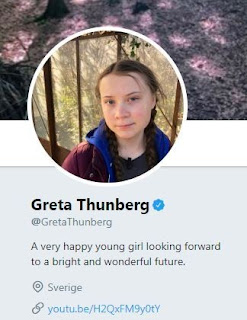 I hesitated today in posting this rather “ungloved” tweet from Club des Cordeliers… because I can see how folks are all SO worked up and feeling some infusion of “hope” in the wake of all the Greta business, but post it I did anyway. It was soon followed by a comment from someone who I know personally, and who cares for me, suggesting that “it is neither healthy nor helpful to see a boogie man around every corner and bad motives through every lens.”

I think there is something important in this well-intended warning that I would like to address, as I think it is reflective of a larger pattern of responses that I expect many of us – at least around these parts – encounter in the course of our day-to-day public communications.


To be clear, I try very hard not to ascribe bad motives to individuals who live outside the public eye… even those whose beliefs strike me as naive and misguided. I believe most folks are well-meaning and motivated to do the right thing. By reposting the above tweet, I was not suggesting that we give up and do nothing. That is not an option. All I was asking for is some fair measure of TRUTH to be revealed to us, and if it will NOT be revealed, then it should be EXPOSED… because we, as a collective of similarly decent people, are WEAKENED when we are left second-guessing and projecting and trying to be positive in the face of SO many unknowns, so much outright crime and such blatant secrecy.

Now if you believe that some combination of what the mainstream media delivers will enable you to arrive at a picture of truth, then fine. I don’t believe it can or will do that, which is why I have to stick my head up from my dada cubicle when necessary and face off against reprimands because, as it happens, all such attempts at exposure are guaranteed to challenge SOME people’s assumptions as to how the world actually works and what it all really means.”

I find almost all actions taken LOCALLY are to the good, for they are done for friends, family, neighbors and for those people and communities we care about. But if we fail to see how as a nation, or as a colossal heap of splintered groups, we are being manipulated, lied to and forced to bear the burden of responsibility for grave misdeeds, while those at the very top, who are overwhelmingly responsible for those misdeeds, get a FREE pass, then I think we are very likely, if inadvertently, helping these same malefactors reset the stage for the worse sins of the past to repeat themselves… which is what the stone in the hand of the above tweet portends. I know full well it is not a “positive” thought, nor is it intended to be. It is rather intended to tell us a basic truth, similar but quite differently-focused than “our house is on fire!”

I could try to frame myself more whimsically, and oftentimes I do, but my current snapshot of the world looks to be one revving up for some MAJOR eruptions… militarily, politically, economically and environmentally. Time grows short for course-correction, and the most the oligarchs seem ready to offer us is yet another mind-numbing election-cycle. If you think that’s enough, or at least better than nothing, fine. I don’t. They have not shown themselves deserving of such consideration or generosity. YOU have, WE have… but THEY have not.

There is also something soul-crushing at work in our subservient relationship to power… a dimming repression of our bright and wholesome energy that keeps us from fully expressing love, hope and helpfulness towards each other. So many of these media-saturated stories-of-the-moment that surge and recede, push us into greater separation from each other and into deeper states of isolation and frustration. This is why I TRY at least to keep a lamp (and a smile) on hand and ready to look and to point out nefarious developments as I see them worming about, in that thickly murky matrix of mass deception.

I’ve said it in many ways over time, but if we are to STAND UP to power, then we must SEE more clearly what power is doing. And, of course, they never tell us what they are doing. We all know that. The media tells us only what those in power want us to learn. We know that too. This world that we are told NOT to look too closely into, is so much the stunningly intricate creation of those who hold IMMENSE power over it and over us. It is fairly easy to see how a large part of their agenda is to keep us always AT each other and never looking UP and seeing our strings being played or the incredible imbalances that exist in a world that allows the military, corporations, governments and global finance to get away with one great CRIME after another.

This VAST array of crimes is ongoing, while our most common response is to lay the responsibility for course-correcting them and FIXING the world upon OURSELVES… as if electing some Democrat will make things okey-doke again. That’s what they WANT you to believe. And if you do believe that, fine. I don’t. I can’t… not based on what I’ve seen and learned. Because irrespective of what is sure to be some VERY contentious and questionable electoral outcomes, the criminals will once again be getting another round of free passes. I don’t think that’s fair. I don’t think that’s just. And I don’t think I am AT ALL being negative for pointing it out… Rather, I feel I am just trying to be honest, and so not fall into painting happy pictures just because a majority of good folks don’t want to ponder too deeply, the largely unnecessary sorrow and suffering that those with limitless wealth and power have inflicted, and CONTINUE to inflict, upon an increasingly vulnerable and unstable world… in our name… AND on our dime.


Mark Petrakis is a long-time theater, event and media producer based in San Francisco. He first broke molds with his Cobra Lounge vaudeville shows of the 90’s, hosted by his alter-ego, Spoonman. Concurrently, he took to tech when the scent was still utopian, building the first official websites for Burning Man, the Residents and multiple other local arts groups of the era. He worked as a consultant to a variety of corps and orgs, including 10 years with the Institute for the Future. He is co-founder of both long-running Anon Salon monthly gatherings and Sea of Dream NYE spectacles.

Read other articles by Mark.