Scores of Civilians Shot Down, Including 43 Children at Gaza Great March of Return 80

In Gaza on Friday, 95 Palestinian civilians, including 43 children, a woman, 2 paramedics and a journalist, were shot and injured by Israeli forces, who fired live rounds against peaceful Palestinian protesters at the 80th Great March of Return.


Israeli forces continued to use excessive force against peaceful protesters, wounding 36 civilians with live bullets and shrapnel in addition to other injuries in the upper body due to direct targeting with rubber bullets and tear gas canisters.

Thousands of civilians took part in this week’s peaceful protests entitled: “For our Prisoners in Israeli Jails and al-Aqsa Mosque”, raising the Palestinian flag and chanting national slogans. 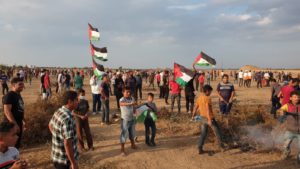 The protests lasted from 3:00 to 6:30 pm, and involved activities such as speeches and theatrical performances. Hundreds of civilians protested at varied distances from the border fence across the Gaza Strip, where some protesters set tires on fire and a few of them attempted to throw stones, Molotov Cocktails and firecrackers at the Israeli forces, who responded with excessive force.

According to PCHR’s documentation, the number of victims increased to 214 since the outbreak of the protests on 30 March 2018, including 46 children, 2 women, 9 persons with disabilities, 4 paramedics and 2 journalists. Additionally, 14,453 were wounded, including 3,592 children, 383 women, 250 paramedics and 216 journalists, noting that many of those injured had sustained multiple injuries on separate occasions.

Summary of today’s events along the Gaza Strip border:

Demonstrations took part adjacent to Abu Safiyah area, northeast of Jabalia, and in southeast of Beit Hanoun. Israeli forces’ attacks against protesters resulted in the injury of 43 civilians, including 20 children, a woman and a paramedic: 20 with live bullets and shrapnel, including 11 children; 14 with rubber bullets, including 5 children and a woman; and 9 were hit with tear gas canisters, including 4 children. Mohammed Abdul Hamid Tawfiq Deeb (24), a volunteer paramedic, was hit with a tear gas canister to the right leg. Israeli forces used a military vehicle that emits the sound of heavy gunfire to cause fear among the protesters. 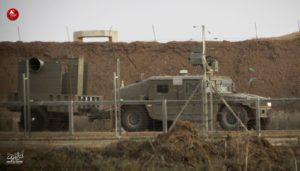 The Israeli military shot and injured 10 civilians, including 7 children: 3 with live bullets and shrapnel and 7 with rubber bullets.

Hundreds of civilians participated in a celebratory protest, in which a journalist and his fiance held their engagement party at the protest. Dozens gathered adjacent to the border fence at a range varying between 0 – 300 meters and raised the Palestinian flag. A few of them attempted to throw stones at Israeli forces. Israeli forces shot and injured 11 civilians, including 4 children, a photojournalist: 4 with live bullets, 4 with rubber bullets, and 3 were hit with tear gas canisters. Mahmoud Khalid Mohammed Khattab (26), a journalist from Deir al-Balah, was shot with a rubber bullet to the left shoulder and he received medical treatment in the field.

The Israeli forces shot and injured 12 civilians, including 4 children, and they were transferred to hospitals: 6 shot with live bullets and shrapnel and 5 with rubber bullets. In addition, many civilians sustained superficial rubber bullet wounds and suffocated due to tear gas inhalation; they received treatment on the spot. A number of protesters set tires on fire adjacent to the border fence.

The Israeli forces shot and injured 19 civilians, including 8 children and a paramedic: 3 with live bullet and shrapnel, 10 with rubber bullets, and 6 were hit with tear gas canisters. Ibrahim Mazen Abu Telakh (21), a volunteer paramedic, was directly hit with a tear gas canister to the left shoulder. 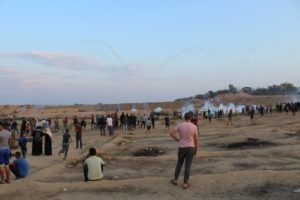 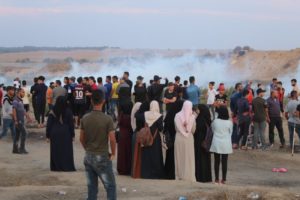 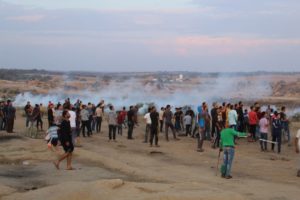