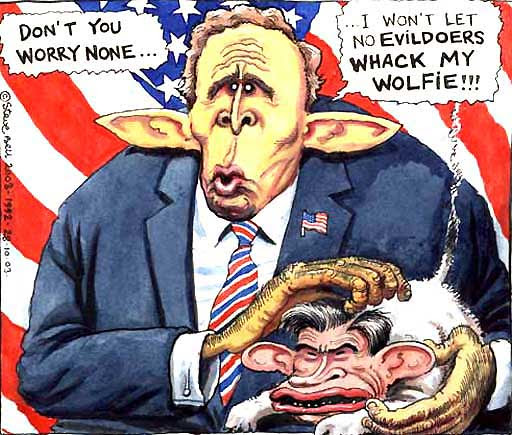 Now that warmonger and master Strausscon criminal conspirator Paul Wolfowitz has been selected by our cardboard cutout president Bush to head up the international loan shark operation, the World Bank, is it possible countries that default on their loans will be shocked and awed into submission? Of course, the World Bank does not have a standing army—it simply relies on the U.S. military to do its biding.

“Wolfowitz, seen as a driving neoconservative voice behind Bush’s controversial strategy of pre-emptive military action and spreading democracy in the Muslim world, pledged to serve the bank’s multinational membership and to build consensus,” writes Adam Entous for Reuters.

“Wolfowitz, No. 2 at the Pentagon, is a divisive figure in Europe and the Middle East for helping shape the Iraq war. Some said the U.S. choice, coming on the heels of the appointment of hawk John Bolton as United Nations ambassador, highlighted White House contempt for international diplomacy,” Reuters reports elsewhere.

“If the Bush administration wanted to poke a finger into the eye of every nation on Earth, it couldn’t have made a better choice,” said John Cavanagh, director of the Institute for Policy Studies, supposedly a liberal think tank, that is if you consider Faberge cosmetics money liberal.

Well, of course, this is exactly what the Strausscons want to do—but instead of a finger it is the barrel of a 120mm M256 cannon on an M1 Abrams tank.

“He could be a lot better than the initial reaction to the labels that have been attached to him,” said John Stremlau, head of the international relations department at Johannesburg’s University of the Witwatersrand. “He could prove over time to be a very important and good leader of the World Bank.”

Labels—for instance international war criminal for plotting the invasion of Iraq, resulting in more than 100,000 people murdered. Indeed, “over time” Wolfowitz will be an ideal president of the World Bank because predatory capitalism is now entering a no-nonsense phase of military belligerence as finite natural resources reach their depletion rates and rich people scramble to make as much money as possible on them.

Strausscon banker is not a stretch because the banks and international financial corporations play an important role in piranha capitalism—and increasingly that role is violent and bloodthirsty as it sets about cashing in what is left of oil, lumber, minerals, water, and human labor.
Posted by Gorilla Radio Blog at Wednesday, March 16, 2005