China's hitherto fame as the breeding ground of the killer "bird flu virus," now introduces another species crossing horror, something so far described by experts as a form of Streptococcus that's symptoms more resemble ebola. - ape 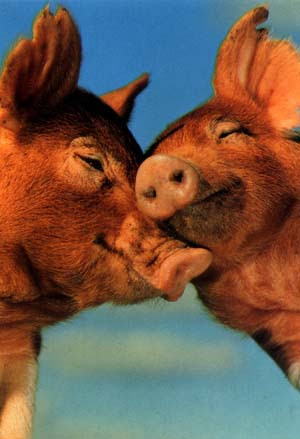 BEIJING, July 26 -- The mysterious deaths of 19 farmers in Southwest China's Sichuan Province were caused by Streptococcus suis, a bacteria carried by pigs, the Ministry of Health said yesterday.

By noon on Sunday, 80 cases, 67 confirmed and 13 suspected, had been reported, according to a ministry statement.

Since the disease was found in humans about one month ago, the bacteria has killed 19. At the moment 17 patients are in a critical condition in hospital.

After an emergency investigation, a group of experts organized by the ministries of health and agriculture confirmed the epidemic was caused by the bacteria which can be passed to humans from pigs.

Experts found that the farmers infected had all slaughtered or processed infected pigs.

The cases were scattered among 75 villages in four districts of Ziyang and Neijiang cities.

No human-to-human infection has been found, the ministry statement said, adding that the disease has a latency period of two to three days.

Those infected develop acute symptoms such as high fever, listlessness, vomiting and bleeding from vessels beneath the skin.

About half of patients also go into severe shock, and the death rate of the disease is quite high, investigating experts said.

Four people infected during the current outbreak have recovered and been released from hospitals.

Farmers have been forbidden from slaughtering and processing infected pigs.

In normal practice, meat-processing factories examine pigs from big farms or single households before they buy them. When they refuse a pig because it is infected, sometimes the farmer will take it home and process it for consumption by his own family.

It is rare for the bacteria to infect a human being. The first ever recorded case was in Denmark in 1968, the ministry said.

Records show that at least 200 human cases of the infection have been reported, mainly in countries and regions breeding pigs and eating pork in Northern Europe and Southern Asia.

Experts are researching how the bacteria spreads from pigs to humans, said ministry spokesman Mao Qun'an.

Mao said he doubted reports that the bacteria can be spread through mosquito bites.

"If so, there would be many more people infected with the disease," Mao told China Daily.

Hong Kong and Macao health authorities have warned residents to be careful of mosquito bites if they go to Sichuan.