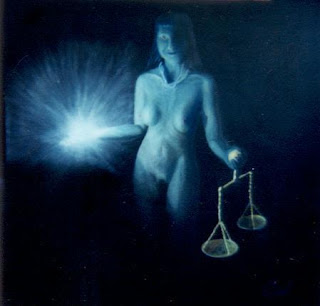 In the ongoing Congressional investigation, the woman who earned her law degree from a school that teaches courses on how lawyers in positions of authority can use their power to identify and punish "sins," confirmed the crisis in the Bush administration's Justice Department.

Regent University School of Law graduate Monica Goodling, whose meteoric rise to the highest levels of the Department of Justice put her in a position to aid and abet a program of politicizing prosecutions by US Attorneys, opened her testimony before the House Judiciary Committee Wednesday by invoking her Fifth Amendment right to refuse to make statements that might incriminate her. Committee Chair John Conyers, D-Michigan, then delivered to Goodling a grant of immunity that allowed her to do something that is rare indeed for Bush administration true believers: Tell the truth, the whole truth and nothing but the truth.


Goodling was right to be concerned about incriminating herself. Under questioning from Democratic committee members, the former political commissar for Attorney General Alberto Gonzales repeatedly admitted to "crossing the line" that separates legal and illegal activities by federal officials. In so doing she offered another powerful insight into the way in which the Bush administration, to which Goodling says she was unquestioningly loyal, has replaced the rule of law with political calculations.


Whether Goodling met the "truth, whole truth and nothing but the truth" mandate remains open to question. Like her former boss, she suffered from convenient memory loss at times regarding critical questions. But Goodling's "I don't recalls" came far less frequently than those of Gonzales. And she was willing to take a good deal more responsibility for what went awry in the Department of Justice than has the man who remains, tenuously, in charge of the agency.


Goodling opened her testimony with a declaration that she had "no desire" to speak negatively about those she worked with in the Bush administration. She then proceeded to point fingers of blame at members of what she described as her DOJ "family," including those who had revealed details of her role in the scandal over the hiring and firing of US Attorneys for political reasons.


Goodling went on to:


• confirm that former DOJ Chief of Staff Kyle Sampson had compiled a list of US Attorneys who would be fired -- apparently for being insufficiently partisan in their inquiries and prosecutions -- and that Gonzales had been aware of the list and involved in meetings about it;


• place White House political czar Karl Rove in a room where the firings were discussed;


• acknowledge that, as early as 2OO5, there was talk about forcing US Attorneys out to make way for White House favorites; and,


• explain how US Attorneys were "rewarded" for helping to promote and defend the Patriot Act, at a time when that law was under attack as an assault on basic liberties.


The former White House liaison for the DOJ told the committee she never attended meetings with top White House aides involving the areas for which she was responsible. At several turns, Goodling portrayed herself as a strangely disconnected and powerless underling who was left out of meetings, told to stay in the shadows, sent away from important sessions in taxis and otherwise neglected, dismissed and overlooked. Yes, she may have had the title of Director of Public Affairs, but, "no," Goodling told the committee, she was "not a decision-maker." Rather, she at one point presented herself as a sort of departmental cheerleader who would send out e-mails to political appointees asking "Hey, who wants to go up to the White House...?"


But the woman who earned her law degree from a school that teaches courses on how lawyers in positions of authority can use their power to identify and punish "sins," confirmed the crisis in the Bush administration's Justice Department, and the manner in which she perpetuated it.


"I do acknowledge that I may have gone too far in asking political questions of applicants for career positions, and may have taken inappropriate political considerations into account on some occasions," Goodling told the committee early in her testimony. She said she made "snap judgments" to block qualified applicants because they were Democrats. Only under intense questioning from committee members Linda Sanchez, D-California, and Jerry Nadler, D-New York, did she offer the details and perspective that made it clear her so-called "mistakes" were part of a deliberate and ongoing pattern of politicization of the hiring process at the nation's chief law-enforcement agency.


Even when Republican committee members attempted to diminish the significance of her admissions, Goodling repeatedly acknowledged that she had "crossed lines" of right and wrong.


Later, Goodling said that she did not believe she had violated any laws. In fact, the Hatch Act and a host of other civil service laws and federal rules make it clear that the aggressive politicization of federal agencies is illegal. Under questioning from Virginia Congressman Bobby Scott, Goodling admitted as much -- albeit, grudgingly.


Goodling stumbled several times before admitting, "The best I can say is that I know I took political considerations into account."


"Do you believe they were illegal or legal?" asked Scott.


"I don't believe I intended to commit a crime," she answered, confirming that Regent University graduates are indeed trained to speak in a lawyerly manner.


Scott pressed: "Did you break the law? Is it against the law to take those considerations into account?"


"I believe I crossed the lines," Goodling replied, "but I didn't mean to."


By "crossed the lines," Scott asked, did she mean that she had violated federal civil service laws?


Goodling responded: "I crossed the line of the civil service rules." Scott clarified that those "rules" are, in fact, "laws." The congressman got to the point of the inquiry into US Attorney hiring and firing issues when he said that it appeared that in Alberto Gonzales' Department of Justice "the culture of loyalty to the administration was more important than loyalty to the rule of law."


Nothing in Monica Goodling's testimony contradicted that impression.


John Nichols is the Washington correspondent for The Nation magazine.