Distant Mirror: A Nation of Patsies, 50 Years On 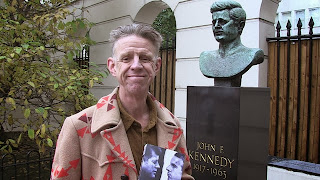 Alex Cox was in full flow, holding forth across the candle-glittered wine glasses and fine china plates. The two of us had more or less gate-crashed High Table at an Oxford college.

He had been artist-in-residence there for a year, but that year had passed and it was not entirely clear that he retained his dining privileges -- much less the right to invite a hick from the sticks for a free feed with the Fellows. But there we were.

He was in town trying to drum up money for a series of films based on Jacobean plays; I was, very briefly and completely ineffectually, helping him. Ignoring High Table protocol, which dictates a change of conversational partner with each new course, Alex kept up his passionate dialogue with me. He was talking of 9/11, then just a couple of years past, and how the official story was full of holes.

It’s still full of holes, of course. All the “official” stories -- 9/11, both Iraq Wars, Iran-Contra, Libya, Kosovo, the Osama rub-out, on and on -- are full of holes. Holes, evasions, misdirections, outright lies: black oil-smoke to hide the enormity and ubiquity of state crime, which each scandal and catastrophe threatens to expose, whether or not there is some direct official culpability in the particular matter at hand. The whole business of empire is carried out in a rolling, heaving hairball of infinitely tangled connections between the upperworld and the underworld, where ruthless factions use, betray, fight and ally with each other in ever-changing combinations. Any sliver of light falling anywhere on the hairball must be snuffed out immediately, lest it illuminate the true nature of the system.

I don’t remember us drawing any profound conclusions between the many courses that night. But the scorching skepticism we shared toward official stories had its origin in the same place, in the mother of all hole-ridden, oil-smoked hairballs: the Kennedy assassination.

As Cox notes in his new book, The President and the Provocateur, he was 8 years old when John Kennedy was killed. (I was five, but I remember it too; or rather, what I most remember was not Kennedy's assassination but Oswald's, being reported on our grainy black-and-white television as we came home from church.) Even then, Cox was struck by the strangeness of the event; shortly after reporting Kennedy was shot, he writes, the BBC suddenly went off the air for several hours -- an unprecedented event. Afterwards, the entire bipartisan British Establishment, mimicking its American counterpart, closed ranks around the official account, locking out the questions even of such redoubtable figures as Bertrand Russell. It was only a few years later that Cox ran across a pamphlet voicing the credible concerns that Russell and others had raised about the Warren Commission's obvious oil-smoke job -- a serendipitous find that set him off on the decades of diligent research summed up in the book. (And on its accompanying website here.)

Cox synthesizes a vast corpus of investigation into the hydra-headed morass of the Kennedy murder to succinct and powerful effect. With a director’s eye for cinematic jump cuts and well-paced narrative, Cox juxtaposes the parallel lives of Kennedy and Oswald as they race toward their joint rendezvous with death in Dallas in November 1963. Cox is especially good at laying out Oswald’s remarkable trajectory, which was surrounded in still-impenetrable murk even from his earliest years. (The “official story” has young Oswald attending two different junior highs in two different states at the same time, for example.) Oswald’s innumerable contacts with the “National Security State” are laid bare – including the fact that this brazen ‘defector’ to the Soviets, who openly declared his intent to reveal state secrets (from his work in the U2 intelligence-gathering program), was not only allowed back into the United States, but was even given a loan by the government to cover the expenses of his return.

Meanwhile, Kennedy is shown dealing with open insubordination from the military-industrial-security complex, enduring a level of hatred and vitriol from these armed and dangerous factions that makes the Tea Party look like purring pussycats – even as he cravenly appeased them at nearly every turn. Cox is careful not to paint JFK in falsely heroic colors; his Kennedy is no liberal saint brought down by evildoers, but an active accomplice in imperial crime who, toward the end of his short life, was -- perhaps – just beginning to grasp the enormity of the devil’s bargain he had made to win power.

Cox comes to no ultimate conclusions. Among the many power factions that wanted Kennedy removed, Cox seems to incline toward his mentor Mark Lane’s view that the CIA was likely a prime mover. But whatever else the mysterious Oswald might have been (including, without doubt, an agent or asset of the security state), the book’s skillful mastering of the facts makes it clear that he was, in the end, exactly what he claimed to be after his arrest: a patsy.

And so are we all, fifty years on: a nation of patsies, still being played by the brutal power-gamers of our unlovely imperium.


A slightly revised version of my column in the latest print version of CounterPunch magazine.
Posted by Gorilla Radio Blog at Saturday, December 21, 2013