Abbas and Trump: Continuing the Facade 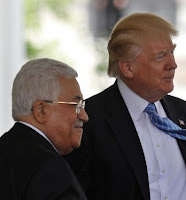 Factoid of the day: Did you know that Jericho is derived from Yerihu (Aramaic for beautiful smell) after the fragrant balsam plant that used to grow all around that area of the Jordan valley. It was the main ingredient in Cleopatra's perfume that the queen of Egypt used to give as gifts to impress her visitors. Jericho is the oldest continuously inhabited town on earth (11-12,000 years).

Donald Trump and Mahmoud Abbas both accomplished what they wanted to accomplish from the meeting at the White House.

I could only think of the statements of Martin Luther King Jr and of Edward Said as I watched the theater unfold in DC. Just a reminder of what MLK Jr said 50 years ago as leaders of South Vietnam trashed leaders of North Vietnam:

"Their questions hit home, and I knew that I could never again raise my voice against the violence of the oppressed in the ghettos without having first spoken clearly to the greatest purveyor of violence in the world today: my own government."


This was one of his most analytical and important speeches which should still be read carefully today (full text at http://kingencyclopedia.stanford.edu/encyclopedia/documentsentry/doc_beyond_vietnam/).

Little changed in those 50 years since then and Trump (like Obama and other presidents before him) gave green light to his military to bomb poor neighborhoods around the world (killing hundreds of civilians mostly children in Mosul alone) while hosting compliant leaders and speaking of “peace” (like fucking for virginity!?). Excuse my language.

Let me step back into analytical mode. In meeting with Abbas, Trump wanted to get the aura of working for a peace process so that when he goes to Saudi Arabia and Israel later this month they can be more comfortable increasing the wars on Yemen, Syria, Lebanon, and Iran (the remaining axis of rebel states in an otherwise US/Israel dominated Middle East). This public relations ploy worked historically. Trump and his advisors praised Abbas for the continued close security cooperation with Israel (the main function for keeping the Palestinian Authority in the past 24 years). Trump said that cooperation between “Palestinians” (the PA) and Israel is “working beautifully” and encouraged further emasculation of any potential future leverage for the Palestinians (I cringe when I hear terms like “incitement” used for native people who want their rights back).

Oppressors and enablers of oppressors use the same language. Clinton used it 20 years ago for Arafat. This is the usual carrot and stick approach. Trump asked Abbas to stop the verbal acrobatics of appearing to support “terrorists” (resistance) pushing him strongly in private and nudging him gently in public.

Husam Zomlot (PLO representative in Washington) tried his best to facilitate and get some productive outcome but the decks are stacked and the PLO has long been stripped by the PA of its original role as a “Palestine Liberation Organization” (it neither reflects all of Palestine nor Liberation and no longer an  organization but a club). It cannot apply any pressure since it has been stripped of all such cards and there is little prospect of democratizing it now (I hope I am wrong).

Abbas got what he came for: appearing “presidential” and relevant to the future, international visibility, and most importantly continuation of the status quo that guarantees continued “financial support” that allows the system to go on.

I just finished reading a book received last week by Andy Clarno titled “Neoliberal Apartheid: Palestine/Israel and South Africa after 1994”. Meticulously the author explains why despite some differences between the two apartheid regimes, that after 1994 the rich got richer (the ruling white and Ashkenazi elites and some blacks in South Africa and some Palestinians) while millions of poor get poorer, more disenfranchised, more bitter etc. This trend will increase even more now that neoliberal trends get “validated” via a successful PR meeting.

Beneficiaries of this meeting: neoliberalism, Zionism, the elites. Targets in the cross-hairs: resistance forces, the prisoners on hunger strike, and the common people in the Arab world (many who will also be bombed soon). Maybe I am wrong and if so I wish colleagues like Dr. Husam Zomlot and Dr. Saeb Erekat tell us exactly what materially was accomplished.

Will Israel stop torturing prisoners? Will it stop or even dismantle continued colonial activities? Will we at least get our act together as Palestinians or will the division with Hamas only intensify serving Zionist interests? Why not implement the Cairo agreements with Hamas? Why insist on continuing this charade of “authority” under occupation (both Hamas and Fatah fell into that trap)?

I would genuinely like to hear the logic of what we are doing. If you are a Palestinian leader, email me even privately and explain (I will keep confidential).

We certainly miss our friend Professor Edward Said who was so right in his analysis of trends and current events. The brief notes I made above are not convincing and not well articulated for example compared to this still relevant analysis from Edward Said written in 1994: Who is worse?..on a humiliating year
https://www.lrb.co.uk/v16/n20/edward-said/who-is-worse

Or this one in 2003: A Road Map to Where? https://www.lrb.co.uk/v25/n12/edward-said/a-road-map-to-where and the most important article of his which pierces through speaking Truth to Power (including Said’s brilliant analysis shortly before he died): Of Dignity and Solidarity
http://www.counterpunch.org/2003/06/23/of-dignity-and-solidarity/

Who said it: pessimism of the intellect, optimism of the will! We must have the latter and continue working very hard. The stakes are far too high and not just for Palestine but the whole world. Brainstorming yesterday only convinces us of the need to act today. And there are so many good people acting that we indeed become optimistic for the future (even intellectually):

What is behind Hamas new charter
https://electronicintifada.net/blogs/ali-abunimah/whats-behind-hamas-new-charter

Stay Human and come visit us