Wrapping the IWC 67: What Next for the World's Whales? 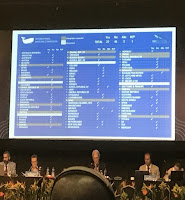 Florianopolis, Brazil  - There was a slightly unreal feeling in the room at the start of today’s final session of IWC 67. Everyone knew that Japan was laying everything on the table but no-one including me was totally sure of the outcome.

The day started off tidying up unfinished business from the days before. The Sub Committee on Special Permit whaling had run into a road-block and its report had not been adopted. The obstacle came in the form of a report from a specially convened group of experts who were tasked with evaluating Japan’s “research” whaling programs.

The experts had given Japan a thumbs down on pretty much every element of the program, which unsurprisingly upset Japan. For a while there was a bit of a log jam that stalled the meeting, but Chairman Morishita solved it by proposing to list countries supporting Japan’s objection in his report of the meeting.

The Chair then got down to the real business of the day.

Those of us in the room on the whales’ side felt confident but weren’t sure. At the outset Japan tabled an amendment to it’s proposal, in essence saying that if the requested Schedule amendment failed to achieve a simple majority the accompanying resolution would not be put to a separate vote. Given the slim chance the Schedule amendment would achieve the required ¾ majority I took this as a good sign. Just the same there was tension in the room as the vote proceeded.

It was relieved when Mexico answered “Si” to the question put by the Secretary. There was a chorus of “What?” accompanied by disbelief and then laughter as the Secretary asked Mexico again. This time Mexico did as expected and answered NO. A ripple of chuckles continued for a few more moments.

The rest of the vote went pretty much in the manner of previous votes in the meeting, so in the end Japan lost. The vote was 27 in favour, 41 against with 2 abstentions. Because Japan achieved only 40% support its entire reform package was lost. Phew. I was glad to see Switzerland and South Africa rejoining the majority. The abstentions were again interesting, this time Korea and Russia. In explaining its vote, Russia said it didn’t like the split in the Commission so had abstained.

I think there was a collective sigh of relief in the room after that vote because things got a lot lighter after the coffee break. The Chair quickly got through the rest of the agenda, approving reports, appointing officers and committee chairs, approving venues for the next meetings of the Commission and Scientific Committee, and generally wrapping things up.

There was even a touch of levity from Japan. It came during voting in a contest organized by Luxembourg for the best cetacean jewelry. Two years ago the contest was for the best whale tie and Japan won. The pieces were displayed on the screen one by one. When the image of a small dolphin appeared Japan raised a point of order, saying small cetaceans were outside the competence of the Commission. The room broke up.

It was difficult to know Japan’s thinking coming into this meeting. It brought such a huge delegation, which I gather included 9 Diet members and at least one senior government official. It was hard to avoid the feeling something was up. Sport and gambling terms come to mind. Japan is not alone in this forum but it might as well be. Meeting after meeting it fails to achieve its core objectives. Japan lost at virtually every turn at IWC 67.

I’m not alone in wondering what comes next. 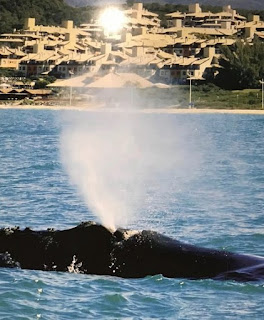 The morning after IWC 67 ended Helena and I decided to take a last walk on the lovely long sandy beach that fronts the resort where the conference was held.

We got to the path leading down to the beach and decided to turn right towards the etchings in stone that had been left by former inhabitants of the area 6,000 or more years ago.

The ocean was still energetic, producing waves that hit the rocky shore and flung fountains of spray almost to our feet. Suddenly Helena exclaimed “I think I saw something!”

We stopped walking and looked out over the ocean, as we’d often done hoping to see a right whale without having the luck of some at the conference. Moments later two dolphins surfaced then disappeared and surfaced again. The sight was a total thrill. They were swimming quietly along parallel to the shore between big rolling waves. At one point I thought they were going to catch a wave and surf, though they didn’t and kept swimming quietly along. We headed further up the path hoping to see more of them and encountered other people, in couples and clumps staring out to sea like us, enjoying the presence of the dolphins. It was a marvelous affirmation of what had happened inside the meeting as it tilted towards enjoying rather than exploiting cetaceans.

Looking back on IWC 67 I have to characterize it as the best run and most interesting with the most agreeable outcomes of any I’ve attended in the last couple of decades. For sure everything didn’t go perfectly but it seldom does in life and at this stage in human relations with whales that would be asking too much. Among noteworthy details was a Secretariat that operated smoothly, making bits like registration and security easy and uncomplicated, a technical team that not only made following what was happening possible, but with the aid of a group of great interpreters seamless in four languages, and rapporteurs who managed to follow everything that was said regardless of language or accent.

For NGOs there were tables to sit at and microphones for requesting the floor, both unheard of previously. The performance of Chairman Morishita was masterful. Being Japanese there was some concern that he would be biased but he was not – rather, he was scrupulously fair. His command of English was impressive and impeccable, even down to idioms and jokes. He kept the complicated agenda to its schedule, adding just a couple of hours at the end of day four when he got concerned about finishing on time. He need not have worried.

For me, the highlights of the meeting were choosing the Florianopolis Declaration over Japan’s attempt to overturn the Moratorium, and the rejection in so many ways of Japan’s agenda – from the harsh scientific judgment of its “research whaling” to it’s proposal to solve the problems of the Commission by bringing high level diplomats into the picture. As I said previously, that last was my biggest worry, but for the moment at least it’s gone. It’s difficult to know what Japan will do in the face of such clarity. Achieving even a simple majority vote in the future will be difficult to impossible. Gone are the days when a bag of cash delivered at the last moment could add a voice and vote, and though the current pattern of voting causes suspicion about votes for aid there is no proof. If that has been Japan’s approach, quite clearly it has failed. So the big question now is, what will Japan do next?

I first went to Japan in 1974 hoping to convince it to stop killing whales because of what we were learning about them. Obviously I failed, but in the process I was told that the way the Japanese mind works is to carefully consider a complicated issue from all sides over whatever time it takes and then finally make a decision. Could now be the time?

When I put this question to Chairman Morishita after the meeting, he looked me in the eye and calmly said: