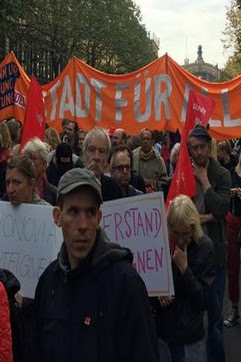 Last Saturday, several thousand people took to the streets of Frankfurt against the housing shortage and exploding rents. The “anti-rent-mania” demonstration, in which an alliance of over 30 initiatives participated, drew around 8,000 people.

Many wore banners and hand-painted signs with inscriptions such as “Stop building luxury properties,” “Houses to those who need them,” “Apartments instead of basements” and “No profit from rent.”

Other statements turned against the legal course in politics, such as “Nationalism is deadly” and “No to the AfD,” or ironically generalized the capitalist situation “Rich parents for all!” and called for [the] essentially socialist measures, “#expropriate”.


Demonstration banner reads "City for all"

The housing shortage is a growing problem nationwide. The right-wing housing policy of the federal and state governments has entailed privatization and luxury refurbishment on the one hand; with housing shortages, forced evictions and homelessness on the other. As the number of publicly subsidized social housing consistently sinks, about 1 million people are homeless in Germany today.

In the banking metropolis of Frankfurt, real estate sharks are preparing for the influx of wealthy bankers following Brexit. Whole districts are converted into chic apartment blocks and luxury properties, while old tenants are evicted from the former workers’ quarters in Gallus, Bockenheim and Rödelheim.

According to a study by the Regional Association Frankfurt/Rhine-Main, the Frankfurt metropolitan area will be short 200,000 affordable apartments within the next 12 years. In the surrounding cities of Offenbach, Wiesbaden, Darmstadt and Mainz rents are also exploding with a similar shortage of affordable housing. Many of the demonstrators came from these cities. 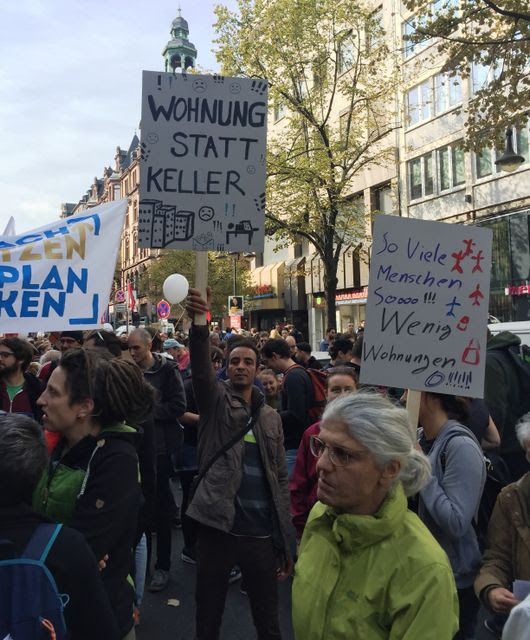 Signs read: “Apartments instead of basements” and
“So many people, so few apartments!”

In the week before Hesse’s regional election, the leading candidate of the Social Democrats (SPD) tried to profit from the demonstration. However, when Thorsten Schäfer-Gümbel, the SPD faction leader in the Hesse State Parliament, tried to present himself as the voice of the people, he was booed and heckled.

Although the SPD has held the opposition in Hesse for 20 years, the party is hated among workers and young people. In recent polls, the SPD have garnered only 20 percent of the vote, which is over 10 percent less than in the last regional elections five years ago. The Social Democrats are identified not only with Germany’s brutal Hartz IV labor reforms, but also with the right-wing policies of the Grand Coalition (Christian Democratic Union/CDU, Christian Social Union/CSU and Social Democratic Party/SPD). Their name represents the implementation of inhuman refugee policies, state rearmament and militarism.

The complete collapse of the Grand Coalition parties—the CDU incumbent Prime Minister Volker Bouffier stands at 26 percent in the polls, which is 12 points less than their 2013 result—currently benefits the Greens. However, the Greens are no alternative to right-wing and anti-social policies. In Hesse, they have been governing together with the CDU for the last five years, with Tarik Al-Wazir as the minister of economic affairs and deputy prime minister. The Greens have supported deportations, police armaments, and deregulation. They have also driven the conversion of Frankfurt’s social housing into luxury properties. Their presence was almost nonexistent at the demonstration.

In contrast, prominent representatives of the Left Party (Die Linke) were at the demonstration, as was their top candidate Janine Wissler. Wissler, a leading member of the pseudo-left Marx21 tendency, however, abandoned her own speech in light of Schäfer-Gümbel’s fiasco.

The Left Party in Hesse is seeking a joint government with the SPD and Greens—the two parties that have propped-up the right-wing government. As Wissler repeatedly emphasized, a coalition between the three parties “on the left will not fail.” Such a coalition currently holds power in Berlin’s State Parliament and its policies are just as right-wing and anti-working-class as those of other state governments.

If the Left Party held power in Hesse, they would pursue the same policy as all other parties in the German Federal Parliament. In Hesse, Wissler tolerated the SPD-Green coalition under Andrea Ypsilanti (SPD) 10 years ago, and a few weeks ago she appeared in the campaign for the Ryanair strike side by side with SPD candidate Schäfer-Gümbel.

On the housing question, the Left Party, wherever it holds governmental responsibility, organizes brutal attacks. As part of the SPD-Left Party coalition in Berlin (2002-2011), Die Linke actively helped to privatize, smash and sell out the same non-commercial housing that they now demand in Hesse. The result can be seen in today’s rapidly rising rent crisis in Berlin.

To fight this blacklisting: Share this article with friends and coworkers