Catalan separatists indicted for rebellion, facing jail for up to 25 years 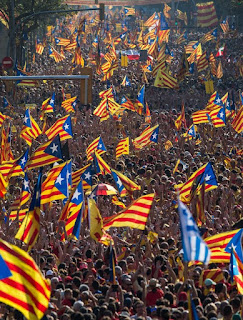 On Friday, Spain’s public prosecutor filed its written accusation against Catalan secessionist leaders in pre-trial detention for their role in the Catalan independence referendum last year and the unilateral independence declaration that followed.

The referendum was deemed illegal by the Popular Party central government in Madrid and utilized to carry out brutal state repression in Barcelona and throughout Catalonia.

Public prosecutors are seeking a 25-year prison term for former deputy, regional vice-premier and leader of Left Republicans of Catalonia (ERC) Oriol Junqueras and to bar him from holding public office for the next 25 years.

They are all charged with rebellion for using “the necessary violence to ensure the criminal outcome sought”—organising an unauthorised secessionist referendum. The crime carries a 30-year maximum sentence. For the three former regional ministers not in pre-trial jail, Carles Mundó, Maritxell Borrás and Santi Vila, the requested sentence has been dropped to seven years on embezzlement charges.

In a separate court case, the National Court is investigating four officials in charge of the Catalan police last year. Prosecutors announced they are asking for 11 years imprisonment for the former regional police chief, Josep Lluis Trapero.

Both trials are expected to begin in early 2019.

During the Catalan crisis the real violence came from the Spanish state, which deployed 16,000 police who violently assaulted voters, including the elderly, with over 1,000 injured. It then proceeded to jail Catalan nationalist politicians in pre-trial detention and impose an unelected government on the region. At the height of the crisis, the PP central government threatened direct military intervention.

Last year, 120 jurists, most openly hostile to the Catalan secessionist cause, signed a manifesto describing the rebellion and sedition charges as a legal fraud. The manifesto stated,

“Only if violating legal principles very seriously can it be affirmed that the accused, in view of the facts that have been attributed to them, could have carried out this crime, or that of conspiracy for rebellion that requires a joint agreement to carry it out with violence.”


Courts outside Spain have also rejected the charge of “rebellion.” Earlier this year, the German High Court in Schleswig-Holstein ruled that former Catalan regional premier Carles Puigdemont, who fled last year to avoid arrest, could not be extradited to Spain on the equivalent German charge. The court argued that,

“[V]iolent clashes with the Civil Guards or the National Police did not reach a point where the constitutional order was under threat in Spain.”


A month later, a Belgian court ruled that the three Spanish European Arrest Warrants for three exiled former Catalan ministers, Meritxell Serret, Antoni Comin and Lluis Puig, were “irregular.” Since then, Spain’s High Court has withdrawn all the European Arrest Warrants against the Catalan separatists who fled Spain to avoid more embarrassing rulings.

June saw the installation of a minority Socialist Party (PSOE)-led government, backed by the pseudo-left Podemos and the Catalan and Basque nationalist parties. However, though Prime Minister Pedro Sánchez has urged dialogue with the separatists to solve the crisis, repression against the Catalan leaders continues.

On the same day the Public Prosecutors office laid its charges against the secessionists, state attorneys, representing the Sánchez government, called for the defendants to be charged with sedition. This is a lesser charge for suspects accused of subverting the Spanish state or constitution, but still carries a 15-year sentence. This epitomizes the supposed “progressive” agenda of the PSOE—holding political prisoners for 15 years instead of 30!

In addition, to placate rightist accusations that the government was “appeasing” the Catalan nationalists, Justice Minister Dolores Delgado stated,

“This is not an issue of gestures [towards the separatists]. It’s a judicial and technical issue of applying the law in a professional manner.” 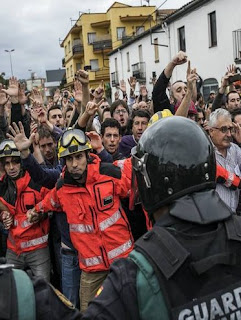 Catalan premier Quim Torra has accused Sánchez of missing “a golden opportunity to remove the Catalan conflict from the courts and put it back in the political arena, which is where it belongs.”

He added that Sánchez had “decided not to act, which amounts to complicity with repression.”

The separatist parties have announced they will now not back the government’s budget in the Spanish parliament. Without their support, the budget will fail to pass as it faces opposition from the right-wing parties, Citizens and the PP.

The political right, including the far-right VOX, is nevertheless mounting a political offensive, utilizing the PSOE’s bankrupt posturing and refusal to mount any genuine defence of democratic rights to prepare its social base for a renewed offensive against the working class.

“Months ago Sánchez argued that the separatists committed a crime of rebellion. He now uses state law to do Catalan leader Torra a favour. A hostage of the coup leaders, he is too discredited to continue presiding over the government and must call elections.”


Citizens Secretary General José Manuel Villegas accused Sánchez of “acting like the defence attorney for the coup plotters” in an interview with radio station SER.

Editorials of the main right-wing newspapers also attacked the government. El Mundo called for snap elections “as soon as possible,” stating that,

“[T]he serious institutional crisis opened by this irresponsible government threatens to undermine the credibility of the judicial power and weaken the action of the state in the face of the most serious attempt to destroy our democracy.”

For El Español, “there is no doubt that the executive uses this criminal lawsuit as an element of barter and political marketing with the separatists … though for the insatiable separatists, their gifts are never enough.”

For ABC, “The reaction of Catalan separatism to the indictments … proves to the Prime Minister that the appeasement tactic is sterile against out-of-control separatist coup plotters.”


The pseudo-left party, Podemos, has, as could be expected, registered a polite complaint at the PSOE’s continued prosecution of the separatist leaders, while making clear this will not cut across their collusion with Sanchez.

General Secretary Pablo Iglesias stated that “those of us who defend dialogue have to continue to work for a political solution and put an end to the judicialisation of the conflict. It’s difficult, but it’s possible and we have to continue this path.” He carefully omitted any mention of the PSOE governments’ state attorney’s sedition charges.

The following day, Iglesias made clear that his main concern is the fate of the PSOE government. He framed his remarks as a defence of the government’s budget, which includes a handful of social reforms within a framework of continued austerity that are so minimal they have even been approved by the European Union. He attacked the secessionists for announcing they would not support the budget, asking, “Why do working people have to pay for the authoritarianism of the PP and the lack of courage of the PSOE?”

This pose of concern for workers is a fraud. Sanchez made clear, at an event organised by Reuters September 27, that he is ready to abandon his plans for a minimal increase in spending and abide by the deficit targets set previously by the PP if this avoids a snap general election.

“If we are obliged to present a draft with the former commitments we will do it,” he said.


Iglesias is declaring his loyalty to the PSOE to further plans for a place for Podemos in a coalition government following an increasingly likely snap election. In the process he is making clear his party’s readiness to help implement continued state repression and austerity.
Posted by Gorilla Radio Blog at Monday, November 05, 2018