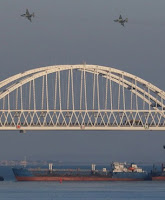 A growing military buildup in Ukraine and Russia has put the world on edge. Ukraine has imposed martial law and requested a major NATO military presence in the Black Sea and Russia is sending troops to its border.

In a disputed incident on November 25th, the Russian Coast Guard fired at and captured three Ukrainian navy vessels that were trying to cross from the Black Sea into the Asov Sea. Russia claimed these waters as its own territory and said that it told Ukrainian ships not to enter but they were refusing to respond to its radio warnings.


Tensions flare as Ukraine imposes martial law and President Poroshenko requests a major NATO military presence in the Black Sea, while Russia sends troops to Crimea and its border. Historian Tarik Cyril Amar speaks about the increasing militarization of the conflict.