The Falling Apple of Legitimacy: Pierre and Justin Trudeau, Canadian Democrats and Citizens of the World

The Falling Apple of Legitimacy: Pierre and Justin Trudeau, Canadian Democrats and Citizens of the World 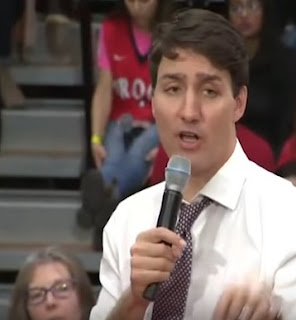 Responding to a question from the floor, Trudeau incanted furiously,

"Anyone who contends they are a friend to the Venezuelan people should be very clear in standing up and condemning the Maduro government, that has been responsible for terrible oppression, for terrible marginalization, for a humanitarian crisis the likes of which South America has not seen in a long time, leading to mass exodus, [and] tremendous number of refugees fleeing all across South America.

"ALL because of an illegitimate dictator named Maduro, who is continuing to not respect their constitution, the rule of law, and the principles of what is fair and true for the future."


Quite a mouthful, and surprising in its vehemence, coming as it did from the man thought the ideal personification of Canada's renowned temperance and earnest-to-a-fault devotion to compromise and negotiated international diplomatic contretemps solution-finding. Disheartening too, for those sharing the prime minister's and El Gran Norte Blanco's avowed dedication to "the principles of what is fair and true", is Canada's ready recognition of coups, (past and present) across South and Central America and the terrible oppression, marginalization, and tremendous number of fleeing refugees they engender.2

We can all agree, the situation now is terrible and oppressive, and the people of Latin America have been marginalized something awful these past years. Watching them flee in their tremendous numbers towards the refuge America promises has since moved President Trump to stern actions to staunch the flow, stem the tide, and gird the loins of his nation's southern border, in steel and concrete where possible, in hopes the power of dissuasion will convince those desperately considering leaving the ills of their troubled lands to instead stay home and make their own societies greater. But, the situation hasn't always been so dire.

Latin America's Pink Tide hit the high water mark in 2009. Social reforms led by Cuba and Venezuela and taken up by Bolivia, Ecuador, Brazil, Argentina, Chile, (and even to a lesser extent Peru) seemed to promise a better, fairer, truer future for the poor majority. 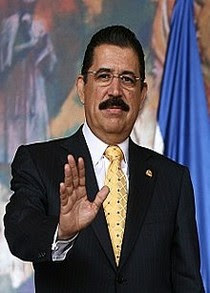 Manuel "Mel" Zelaya, (right) the telegenic, charismatic president of Honduras was, like Justin Trudeau, regarded a true blue, centrist democrat. Though a member of the landed gentry he'd made agrarian and wage reforms, and his modest efforts had begun to bear some fruit; remarkable considering the entrenched depth and long legacy of Honduras' political corruption. In the last year of his mandate, Zelaya hoped to strengthen the democratic trajectory he'd set in motion for the country.

Back in the 1970's and 80's, Honduras was the absolute centre of Latin America's Dirty War; the infamous Plan (Operation) Condor being conducted largely from America's embassy in Tegucigalpa and responsible for much, if not ALL, of the humanitarian crises of the era, (the likes of which, perhaps to which, Mr. Trudeau's Brock University anti-Maduro tirade alluded?).3

Those dark times, happily for the people of Honduras and their true friends lay far in the past in 2009. But, they wouldn't remain so.

The late, great William Blum describes what happened in Honduras next:

"It is a tale told many times in Latin America: The downtrodden masses finally put into power a leader committed to reversing the status quo, determined to try to put an end to two centuries of oppression … and before long the military overthrows the democratically-elected government, while the United States – if not the mastermind behind the coup – does nothing to prevent it or to punish the coup regime, as only the United States can punish; meanwhile Washington officials pretend to be very upset over this “affront to democracy” while giving major support to the coup regime."4


On the pre-dawn summer morning of June 28th, 2009, Honduran commandos, following orders issued by the country's Supreme Court, dragged Mel Zelaya out of bed, bundling the president into a jeep and spiriting him away to a waiting plane bound for Costa Rica. His crime: introducing a Non-binding referendum, putting before the people the prospect of establishing a constituent assembly and reforming the constitution along more democratic lines.

Mark Weisbrot describes the entirely predictable aftermath of the coup William Blum notes was "championed by US Secretary of State Hillary Clinton", (among other democratic paragons in El Norte and elsewhere) six months later, as elections to "legitimize" the coupsters approached.5

"The Obama administration has since been able to recruit the right-wing governments of Canada, Panama, and Colombia, and also Peru, to recognize the elections. But its support for these undemocratic elections – to which the OAS, European Union, and the Carter Center all refused to send observers – has left the Obama administration as isolated as its predecessor in the hemisphere."

More than its fellow "right-wing" governments, Canada under Conservative Party prime minister, Stephen Harper was first among equals to endorse the plotters, and quick to sign a Free Trade agreement with the new "government", sealing the deal as it were. But, in fairness to Harper, his Liberal opposition, where at this time young Justin was cutting his teeth as a new MP and party critic for youth and multiculturalism, would have done the same thing, if not so quickly. It merely follows a bipartisan pattern of Canadian political behaviour going way back.

Canadian journalist and author, Yves Engler, who's written the book on the hidden history of his country's malfeasant foreign policy, (several of them in fact) reminds how Pere Trudeau in 1971 similarly turned his back on the duly elected government of Chile, as real life dictator and serial war criminal, Augusto Pinochet inaugurated a fascist regime enduring almost two decades, all for the benefit of his class and the international investment community.6

"Reprisals and searches have created panic atmosphere affecting particularly expatriates including the riffraff of the Latin American Left to whom Allende gave asylum … the country has been on a prolonged political binge under the elected Allende government and the junta has assumed the probably thankless task of sobering Chile up." (emphasis added)

"Thousands were incarcerated, tortured and killed in "sobering Chile up." Within three weeks of the coup, Canada recognized Pinochet's military junta. Ross stated:

"I can see no useful purpose to withholding recognition unduly. Indeed, such action might even tend to delay Chile's eventual return to the democratic process."


Engler's books also chronicle in detail the painful truth, for those still harbouring the illusion of Canada's manufactured image as "international benefactor", of his country's perfidy in the service of trans-national corporate wealth and national political advantage to the disadvantage of the citizens of not only Latin America, but in Africa, the Middle East, Asia, and the Caribbean, (including Cuba).

So, maybe it's not such a surprise witnessing Justin Trudeau's disdain for Nicolás Maduro performed as was so vividly done in St. Catharines after all, given his country's historical anathema for democracy as expressed abroad.

Postscript: Canada's foreign minister, Chrystia Freeland has announced Canada will soon host a meeting of the so-called "Lima Group", a collection of anti-democratic nations who have tried to hijack, with the aid of the Organization of American States, what little remains of national sovereignty among the remnant nations of Latin America's once swelling Pink Tide to decide Venezuela's future, "fair and true".