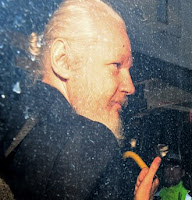 WikiLeaks founder Julian Assange faced his first extradition hearing in London on Thursday in which he declared that he does not want to be extradited to the United States on charges of conspiring to hack a military computer.

Assange and his supporters though, argue that the case is really about punishing someone who published embarrassing information that the US government wants to keep secret. Shortly before the extradition hearing, Assange had been sentenced to 50 weeks in prison in the UK for violating bail conditions.

Assange is now being held in a maximum-security prison even though he was never charged with having committed a violent crime. We speak to Julian Assange's lawyer, Jennifer Robinson, about the first extradition hearing Assange had in London, where he refused to voluntarily turn himself over to US authorities.

Jennifer Robinson is an Australian human rights lawyer and barrister with Doughty Street Chambers in London.