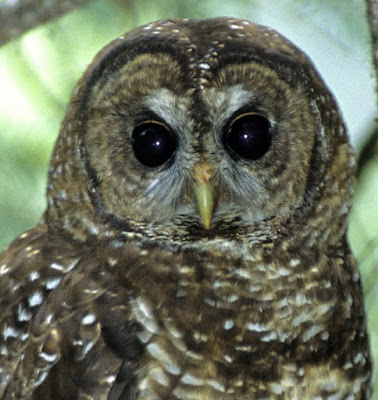 
“We knew the provincial government sanctioned logging in designated Spotted Owl Wildlife Habitat Areas to supposedly make future habitat but to actually see these massive clearcuts is both shocking and distressing. Block after block of clearcuts, they completely dog piled in on this area,” said Wilderness Committee Co-Executive Director Joe Foy.

“The B.C. government has granted permits for this logging to satisfy the powerful timber industry lobby. Their claim this logging is to provide for future spotted owl habitat is dishonest and twisted.”


And all this is happening while the federal government is poised to intervene on the threat to this species. In May the Wilderness Committee’s legal team from Ecojustice sent a demand letter to Federal Environment Minister Catherine McKenna calling on her to step up and defend spotted owl habitat.

“At the end of June we received notice the government of Canada will be taking action,” said Foy.

“We wonder now if the action will be enough or on time to save the spotted owl from the B.C. timber industry’s relentless liquidation of these forests.”


The spotted owl is one of the most endangered bird species in Canada. At one time 500 pairs were thought to inhabit their Canadian range in southwest mainland B.C. Decades of industrial logging has caused their numbers to drop sharply because they require old-growth forests for habitat.

The Wilderness Committee surveyed forests within spotted owl range on the east side of Harrison Lake in the Big Silver Valley near its confluence with Hornet Creek and found extensive logging in a Wildlife Habitat Area there. A selection of photos can be found here. Video footage can be found here.

“We need to be protecting all the remaining old-growth forests and allowing younger forests to age into suitable habitat so the owls and other old-growth dependent species can survive,” said Foy.

“The B.C. government’s current logging policy is an extinction plan which has to be stopped.”