Bring It On! A New American Republic

Go for it Republicans! A Red State Secession Movement from the US of A is a Great Idea!

‘And here’s to the state of Mississippi
Where underneath their border the devil draws no line
If you drag their muddy rivers nameless bodies you will find
The calendar is lying when it reads the present time.
Oh, here’s to the land
you tore out the heart of
Mississippi find yourself
another country to be part of.’ — Phil Ochs 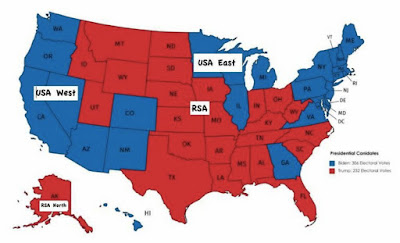 Some have expressed outrage at such a suggestion, but really, since it’s going to be next to impossible to get rid of the Electoral College that has enabled Republicans to capture the White House for three of the last five election cycles despite losing the popular vote, we’re stuck with having far too many right-wing presidents. We’re also stuck with the consolation prize of, when we do manage to elect a Democrat to the White House, ending up with some namby-pamby Democratic wimp like Obama or Biden.

Then too, there is the Senate, where the reactionary, even fascistic GOP has a virtual lock on the majority thanks Constitution assigning two seats per state, regardless of population. This means California’s 55 million mostly Democratic voters and Wyoming’s 300,000 mostly Republican voters each get only the same two senators to send to Washington.

If some of the reddest states were to secede and go off to form their own country, the remaining US would inevitably be a much better place. This is not just because the trog politicians who dominate the Senate and the White House would be removed to some new Red States of America (RSA) capital (hint: it won’t be Richmond, which was the capital of the Confederacy, since Virginia is now a reliably “blue” state), as delightful as that would be. More importantly, the remaining states of a likely bi-coastal USA would also be instantly divested of a huge number — tens of millions! — of wilfully ignorant, dogmatically religious, gun-obsessed, anti-science, racist, sexist, homophobic and anti-abortion dregs of humanity.

A roughly 25-state USA would also be suddenly much richer — and much better able to fund long-unmet human needs. That’s because most of the income and the tax base of the United States is in those 25 states.

Because the Republican states like Texas, Missouri, Alabama, Montana, South Carolina, Florida, and Kansas, are militantly anti-union, wages in those and other Red states are significantly lower than in the Democratic-led states, where most unionized workers can be found. As a result, tax collections by the IRS that go to fund federal programs are much higher from those states. Yet on a per capita basis, because of higher levels of poverty in Republican states, and poorer state programs for health care, public assistance, etc., federal transfer payments for federally funded or supported programs like SMAP (Food Stamps), Temporary Assistance for Needy Families (TANF), subsidized insurance under the Affordable Care Act, and Medicaid, are significantly higher to red states in aggregate.

Red states also get more money per capita in other federal programs whether it’s military pay going to troops on bases that are much more prevalent in red states than blue ones, highway funding, disaster relief funding, etc., than do blue states.

A report by the SUNY Rockefeller Institute of Government found that the people and corporations of eight US states paid more in taxes to the federal government than they received in federal funding. Six of those states, all Democratic-run (New York, New Jersey, Massachusetts, Connecticut, Colorado and Minnesota), were significant net payers of taxes to Washington. The only exceptions were the Republican states Utah and Nebraska, which were also net taxpayers, although not by much. The rest of the states, mostly Red, were net receivers of benefits from Uncle Sam.

What this means is that if the Red states were to pull out of the USA, and go on their own, all but two of them — those being rather small ones in population — which are net payers of taxes to Washington, or in other words 23 of them, including the huge states of Texas and Florida, would be deprived of significant federal funds that they currently count on.

Here’s another way to look at it: In 2016, according to a study by WalletHub, 13 of the top 15 states that are most dependent upon federal funds to support their people and their annual budgetary needs voted for Trump.

That, by the way, includes federal student loans — currently the lifeblood of universities public and private. A lot of the federal funding for those loans and Pell Grants to students comes from the federal government and, because wages and populations are higher in the Blue states, it’s a huge subsidy paid by Blue state taxpayers which would no longer be available. So the universities of the mostly southern and midwestern and mountain states would suddenly be strapped for students and their tuition, leading to a further dumbing down of those states populations, as their states became even less attractive than they are already to high-skill-requiring companies looking to expand. 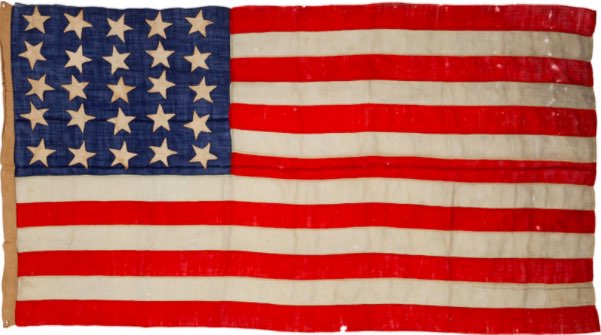 There is already a US flag with 25 states, dating from 1836 when Arkansas joined the Union. No need to design a new one!

Farm states of the midwest would be particularly hard-hit by seceding as farmers would lose their federal crop support payments. Highways, which are hugely expensive to maintain, would crumble as states with low populations but lots of wide open spaces needing roads and highways, had to start coming up with the funds for construction, maintenance and repair from their own tax bases instead of getting it from the taxes of New Yorkers and Bay Staters.

The Southern and Midwestern states that benefit from all the income and contractor funds flowing into their big military bases and installations would suddenly find those bases being shut down and moved into the downsized USA.

And now for the really good part. With the Red states and their low-wage, low-education populations and their huge infrastructure needs removed from the federal budget, the remaining states of the USA, the ones that keep voting Democratic but getting stuck with Republican government in Washington, would suddenly be freed of that dead weight of troglodyte politicians. Suddenly they’d find themselves awash in funding for things like a single-payer Canadian-style health care system that would eliminate all the risk and cost of getting sick, and the votes in Congress to pass such a reform. They’d be able to make college free to all at state institutions. They might even, with the Republican lock on Congress gone, be able to finally tackle America’s long obsession with military spending .

I can say this because much of the reason that pro-militarist neoliberals have been running the Democratic Party for at least the last 44 years because Republicans have been so dominant nationally. Genuinely progressive or (heaven forfend!) socialist candidates have been unable to win national office because neoliberals in party leadership would always argue that it would take a “middle-of-the-road” candidate in swing states,Red states, or even narrowly Democratic states, to defeat a Republican.

In a Blue-state USA, that would no longer be true. In short order, the Democratic Party in a Blue-state USA would shift wa-a-ay over to the left, and become a social democratic party — perhaps a fairly radical one. And its candidates could expect to campaign and win control of both houses of Congress and to elect presidents. (Just look at Bernie Sanders — he was winning primaries everywhere until he got to South Carolina, and then he was singed, and then came the Southern-cominated Super Tuesday primaries and he was cooked and out of the game.)

The big problem after the US splits apart into a USA and an RSA would still be immigration, but it wouldn’t be people coming across the Rio Grande that would be the issue. It would be the poorest people in the secessionist states, abandoned by the right-wing leadership of the RSA, trying to slip into the US to survive that would be the problem.

We could probably deter a lot of the least desirable of these hard-luck redneck migrants just by having signs at the border crossings saying, “Drop your guns before seeking asylum or forget it!” Although let’s face it, there would be those who’d try to sneak across. Spotting southern accents would be easy enough, but those who could imitate northern or West Coast accents could be harder to spot them.

On the other hand, most on coming into a gleaming new Blue state USA, with its high-speed rail lines, free municipal transportation systems, free health care, and free education, would probably decide that ditching the hidden-carry weapons and signing up for citizenship would be a good bargain.

If that didn’t work, we could build a beautiful wall along the borders.

So bring it on, Chairman West, and Rush, you charlatan! Push for secession of Red State America. We’d love to see y’all go off on your own.*

*Be warned, though: We will, like Moscow did during the breakup of the Soviet Union, will be moving all nuclear weapons, as well as most of the Navy’s ships, the Air Force’s planes and missiles, and the Army’s and Marine’s heavy weaponry, to the US, where hopefully we’ll be mothballing most of them. Nobody as irresponsible with personal weapons as you folks are should be left in possession of such things. There may be some other stuff subject to negotiation too, like the CDC, which we’ll be moving up north, but I’m sure you won’t miss it.