Áñez in Chains: Bolivia's Face of the Coup Facing Justice

To Western Media, Prosecuting Bolivian Coup Leaders Is Worse Than Leading a Coup

March 23, 2021
One can imagine an editor of the London-based Guardian (3/17/21) shaking her head sadly as she typed the headline: “Cycle of Retribution Takes Bolivia’s Ex-President From Palace to Prison Cell.”

The subhead told readers, “Jeanine Áñez’s government once sought to jail the country’s former leader Evo Morales for terrorism and sedition—now she faces the same charges.”

The Guardian article by Tom Phillips wants us to lament an alleged incapacity of Bolivian governments to stop persecuting opponents once they take office. We are told that Áñez’s government did it, and that now the government of President Luis Arce (elected in a landslide win on October 18, 2020) is also doing it. 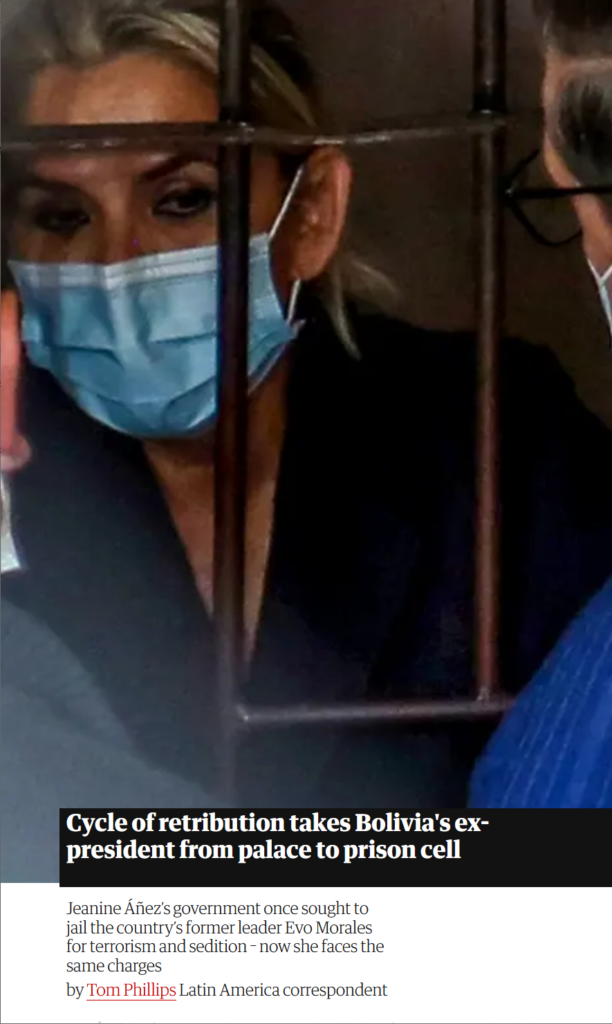 The article’s premise is a lie, and the liberal Guardian has hardly been the only outlet spreading it, with help from Jose Miguel Vivanco, Americas director of Human Rights Watch (HRW), whom Philips quoted. A team effort between Western media and NGOs like HRW often reinforces the views of the US government (FAIR.org, 8/23/18, 8/31/18, 5/31/2o, 11/3/18).
Áñez was a US-backed dictator installed after a military coup sent democratically elected President Evo Morales fleeing Bolivia for his life on November 10, 2019.  Once in power, Áñez immediately promised security forces legal immunity as they massacred dozens of protesters.
She is now charged with terrorism (in addition to sedition and criminal conspiracy) over her attempt to keep power by terrorizing the public. Her arrest is good news to people who support democracy and human rights.
But now, as when the coup took place in 2019, the most obvious conclusions are evaded when they are incompatible with US foreign policy (FAIR.org, 11/11/19). It should surprise nobody that US officials have made statements depicting her arrest as political persecution.

Fighting to spring an ex-dictator

"The arrest warrants against Añez and her ministers do not contain any evidence that they have committed the crime of “terrorism.” For this reason, they generate well-founded doubts that it is a process based on political motives."

The Washington Post article, whose headline alleged a “crackdown on opposition,” used a shorter version of the same quote from Vivanco.
While all the articles described the coup as an allegation, CNN stands out for getting the most ridiculous with its denialism:

"Then-head of the Bolivian Armed Forces, Cmdr. Williams Kaliman, asked Morales to step down to restore stability and peace; Morales acquiesced on November 10 “for the good of Bolivia.”

"But political allies maintain he was removed from power as part of a coup orchestrated by conservatives, including Áñez."

Did Kaliman need to be filmed putting a gun directly to Morales’ head for CNN to admit it was a coup?
Adding to the disinformation loop from his own platform on Twitter, Vivanco spread an Americas Quarterly op-ed  by Raul Peñaranda (3/16/21) that denounced the arrest of Áñez. Peñaranda once said that Bolivia’s democracy was “saved” the day Morales was overthrown, and his recent op-ed depicts the November 2019 coup as a legal transfer of power.
In 2019, the military publicly “urged” Morales to resign, as both the military and police made clear they would not protect him from violent right-wing protesters, some of whom ransacked his house.  Áñez, a right-wing senator whose party received only 4% of the national vote in the 2019 legislative elections, had the presidential sash placed on her by military men, while lawmakers from Evo Morales’ party (Movimineto al Socialismo, or MAS), the majority in the legislature, were absent: some in hiding, others refusing to attend without guarantees of their safety and their families’.
Ignoring all that, the Guardian article by Tom Philips refers to “claims the former senator [Áñez] was involved in plotting the right-wing coup that Bolivia’s current government claims brought her to power.” (My emphasis.) Editors are usually big fans of concision. The highlighted words should have been deleted. An added benefit would have been accuracy.
Of course, it’s easier to deny that Áñez was involved in plotting the coup that put her in power (hardly a stretch) if you do not even accept that a coup took place. Reuters placed scare quotes around the word “coup” in headlines about Áñez’s arrest: “Bolivian Ex-President Áñez Begins Four-Month Detention Over ‘Coup’ Allegations” (3/16/21); “ Bolivian Ex-President Áñez Begins Jail Term as Rights Groups Slam ‘Coup’ Probe” (3/14/21).
Reuters (3/14/21) and CNN (3/15/21) also uncritically reported the thoroughly debunked pretext for the coup. CNN reported, “Though an international audit would later find the results the 2019 election could not be validated because of ‘serious irregularities,’ [Morales] declared himself the winner, prompting massive protests around the country.” (The “international audit” is the OAS’s widely debunked report.) Reuters simply stated that the Organization of America States (OAS) “was an official monitor of the 2019 election and had found it fraudulent.” 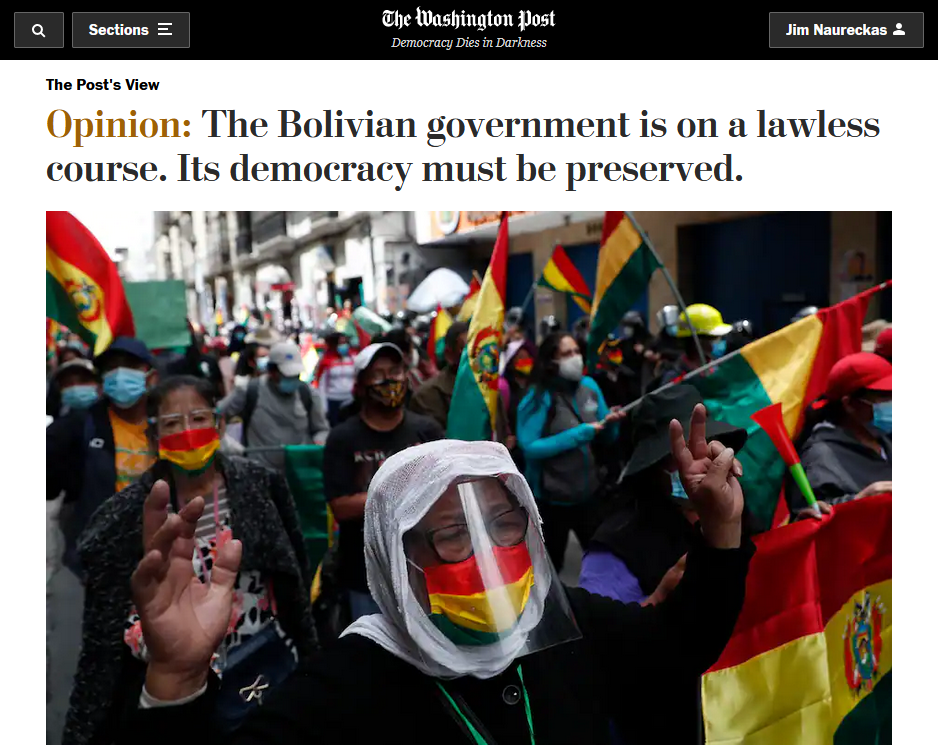 The “lawless course” that the Washington Post (3/18/21) is referring to is prosecuting the people who overthrew the elected Bolivian government and killed people who protested the coup.
The coup was incited by transparently dishonest claims repeatedly made by OAS monitors about the presidential election won by Morales on October 20, 2019. Three days after the election, they claimed there was a “drastic,” “inexplicable” and “hard to explain” increase in Morales’ lead in the vote count (FAIR.org, 12/17/19).
The Washington, DC–based Center for Economic and Policy Research immediately pointed out that this was utter nonsense. But in the crucial months following Morales’ ouster, outlets like Reuters constantly shielded the OAS from devastating criticism. Eventually, expert criticism of the OAS continually mounted and disrupted the media silence. Details from the election results in 2020, in which Evo Morales’ party triumphed by an even greater margin than in 2019, further exposed OAS dishonesty.
Like Reuters, the widely quoted Jose Miguel Vivanco of HRW spread fraud claims when it mattered most in 2019. The day after the election won by Morales, Vivanco  tweeted in Spanish that “everything indicates that [Evo Morales]  intends to steal the election.” As late as December 2019, HRW executive director Ken Roth was also promoting OAS claims without the slightest trace of scepticism. Months into the murderous illegitimate rule of Áñez, Vivanco explicitly referred to Bolivia as a “democracy.” He did so in a Spanish-language interview with BrujulaDigital  (5/15/20), an outlet edited by Raul Peñaranda, the coup supporter whose Americas Quarterly op-ed Vivanco recently promoted on Twitter. Meanwhile, on Twitter, Vivanco constantly refers to the governments of President Nicolás Maduro in Venezuela, and President Daniel Ortega in Nicaragua–two democratically elected presidents the US government wants overthrown–as “dictaduras” (dictatorships).
The New York Times editorial board openly supported the coup that ousted Morales in 2019:

"The forced ouster of an elected leader is by definition a setback to democracy, and so a moment of risk. But when a leader resorts to brazenly abusing the power and institutions put in his care by the electorate, as President Evo Morales did in Bolivia, it is he who sheds his legitimacy, and forcing him out often becomes the only remaining option. That is what the Bolivians have done, and what remains is to hope that Mr. Morales goes peacefully into exile in Mexico and to help Bolivia restore its wounded democracy."

So predictably enough, a Times article (3/12/21) about the recent Áñez arrest referred vaguely to the utterly debunked OAS fraud claims (“a contested vote count”) and took the same kind of dishonest stance as HRW and other Western media by equating  a US-backed dictatorship to a democratically elected government whose ouster the US supported: “Both Mr. Morales and Ms. Añez used the judiciary to go after their critics.”
The Washington Post editorial board (3/18/21) came out with a wild defense of  Añez, headlined: “The Bolivian Government Is on a Lawless Course. Its Democracy Must Be Preserved.” Most ominously, the editorial said, “The Biden administration should lead a regional effort to preserve democratic stability in this long-suffering country, lest crisis turn into catastrophe.” Informed people may laugh at this for a few seconds–until they remember that Bolivia’s people could eventually face lethal US sanctions for daring to hold murderers to account. Left unchallenged, that’s the catastrophe that propaganda like this could bring about.
Brutal dictators supported by Washington have no reason to doubt that establishment journalists and big NGOs will try very hard to keep them out of jail. Removing the threat of US -backed coups from the world will involve a constant struggle against Western media and the sources they present to us as reliable.
Posted by Gorilla Radio Blog at Tuesday, March 23, 2021