Rebel Songs for 2021: A New Album Release from David Rovics and Friends

March 9, 2021
The first album from David Rovics of 2021 is out now on Bandcamp and will soon be up on all the usual music streaming platforms, including SoundCloud's new streaming platform, when it launches on April 1st. 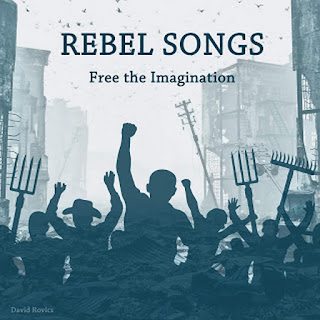 The album, Rebel Songs, is a very pandemic-inspired international collaboration between Oregon, where the basic tracks were recorded at Big Red Studio in Corbett, and Ireland, where Pol Mac Adaim added various instruments to the mix and turned it all into an album, at his home studio in the Cooley Mountains.

Feel free to share this press release, in whole or in part, in any form, anywhere, with or without attribution.
The new album features 13 original songs, all written between the fall of 2019 and the fall of 2020.  The oldest song on the album was written in the days just after the last time David and Pol did an album together, though back then, in the fall of 2019, it was all made in person, in Ireland.  "The Pogroms of 1969" is a song about what is still living memory for many, when a campaign of government lies and sabotage combined with other factors to inspire a wave of mob attacks on predominantly Catholic communities across Northern Ireland, where Pol grew up.
There are two other songs about history on the album -- "When This Fertile Valley Was Stolen" and "The Pandemic of 1918."  The former speaks to the theft of the Willamette Valley by the white settlers who founded the explicitly, institutionally racist state of Oregon.  The latter highlights some of the shocking parallels between today and a century ago.
Whether about history or current affairs, all of the songs in the collection are in one way or another related to the present-day global pandemic, or to the protest movement that arose partially in response to the many inequities that were exposed by it, and the kleptocrat-led US government's inept response to it. 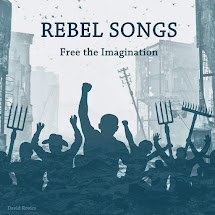 The songs speak to the present, and to the times we've been living in over the past year in particular.  "They Lied" explores why so many of the people dying of Covid-19 didn't believe the virus existed.  "To All the Jared Kushners of the World" is a stinging, and driving, indictment of the billionaire class that this American oligarch represents.
"Say Their Names" was written months into the Black Lives Matter uprising, and controversially puts Micah Xavier Johnson in the pantheon of Black martyrs sacrificed at the altar of white supremacy, along with George Floyd, Breonna Taylor, Eric Garner, Michael Brown, Kendra James, and others whose names are said.
"Essentially Expandable (The Death of Jason Hargrove)" highlights the plight of what we have come to call "essential workers," the last to be paid or protected, and the first to die.  "There's Water On The Moon" is escapist fantasy, inspired by one of the many scientific discoveries of 2020.  "Behind These Prison Walls" gives this tribute to Wikileaks and Julian Assange the band treatment.
"With Masks Upon Their Faces and Leaf-Blowers In Their Hands," "Don't Pay The Rent," and "Our Imagination" are all songs inspired by the variety of social movements that have grown exponentially since the events of the past year, in David's home town of Portland, Oregon, and far beyond.
In addition to David's guitar and voice, and Pol Mac Adaim's keyboards, whistles, harmonicas, vocal harmonies, and mixing prowess, Rebel Songs features Arcellus Sykes on acoustic and electric bass, and Spank Hopkins on drums, with Billy Oskay performing essential roles as both producer and engineer for the recording sessions for the basic tracks.
David is, as always, available for interviews, online concerts, etc.  You can email him at drovics@gmail.com, or call or text him at +1 503 863 1177.
Posted by Gorilla Radio Blog at Tuesday, March 09, 2021