Indigenous Bolivia Ready to Go to War Against Fascism

Bolivia, December 2019, three weeks after the fascist coup. It is devilishly cold. My comrade’s car is carefully navigating through the deep mud tracks. Enormous snow-covered mountain peaks are clearly visible in the distance. 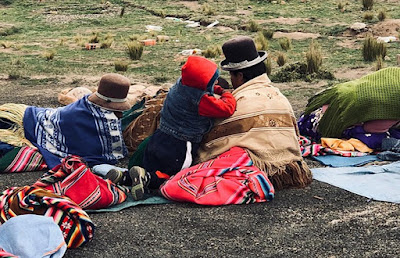 So many times, in the past I came close to death here. In Peru as well as in Bolivia. More often in Peru.

Now, what I do is totally mad. Being a supporter of President Evo Morales from the beginning until this very moment, I am not supposed to be here; in Bolivia, in the Altiplano. But I am, because these mud huts on the left and right, are so familiar and so dear to me.

My comrade is a Bolivian farmer, an indigenous man. His hands are red, rough. He usually does not talk much, but after the coup, he cannot stop speaking. This is his country; the country that he loves and which has been stolen from him, from his wife and from his children.

We can both get screwed here, but if we do, that’s life; we know the risk and we are happy to take it.

Carlos (not his real name), my driver and a friend, explained:

“I called them, the elders, and they said it is OK that you come. I sent them your essays. You know, people here now read, even in the deep villages. After 14 years of Evo’s government, the entire country is covered by the mobile phone network. They read your stuff translated into Spanish. They liked what they read. They agreed to give you a statement. But they said, ‘if he is not really a Russian-Chinese left-wing writer, but instead some Camacho crony, we will break his head with a stone.’”