Wait For It! Our Own Carlson

Wait for It! Our Own Tucker Carlson
I don’t often read Mark Milke’s occasional Times-Colonist column; for how many years can one be expected to indulge “trickle-down,” Reagonomics? But today’s (March 21, ’05) headline, ‘The Left is still in love with Cuba’ caught my eye. . - {ape}

You see, I’d just received an invitation from Randy Caravaggio at the Goods for Cuba Committee to come around to meet Cuban, Antonio Pubillones during his visit to Victoria. Senor Pubillones is the newly appointed First Secretary of the Cuban Embassy in Ottawa. So, I endured Mark’s tortured prose, curious to “learn” more about Cuba


I discovered Canada possesses, not unlike Mark’s ideological wellspring, the United States, an endangered political species known as “The Left.” His obvious disparagement of these doomed fools makes clear his apposite political self-identification. Quoting fellow-traveller, Sean Holman, the upstart firebrand recently seconded to serve the interests of the well-heeled from the op-ed pages of the Vancouver Sun, Mark assails Cuba’s health care system. Apparently Cuba, the country that has sent more medical professionals to serve the neglected healthcare needs of the world’s poorest countries than any other, own's medical system is a mess.

Between excoriations of those “Lefties,” like NDP Vancouver-Fairview candidate Gregor Robertson, showing the temerity to acknowledge Cuba’s contributions to the world, Mark charges on in Helmsian fashion, labelling President Fidel Castro a tyrant. And where, other than his shrill political bed-fellow Holman does he draw his insights? From none other than the director of the Urban Renaissance Institute, Lawrence “Larry” Solomon.

URI is but one arm of a vast collection of “public interest” organizations funded primarily through “foundations” and corporations whose tentacles reach into every sphere of modern life. From health care to water privatization, these green veneered organizations claim the public weal, while forwarding the interests of their corporate sponsors. 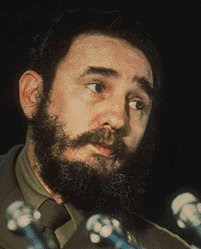 To be fair and balanced to Mark’s journalistic “efforts,” he does point out Cuba’s devastated economy, but ascribes a mere sentence to the effects of the forty-plus year U.S. embargo. And even then, he’s quick to discount those effects, saying, “Of course, I’d blame part of that on the U.S. trade embargo: Cut off trade and people suffer. But the blame-America [sic] privilege is one any hard-left, wide-eyed, Castro loving New Democrat can’t avail themselves of.” Why those goggle-eyed Lefties cannot do this Mark fails to explain. Instead, the intrepid defender of the indefensible sallies forth, damning “run-of-the-mill repression,” stating “wait for it!” Cuba’s gulags. (No, not Guantanamo Bay.) And where does he glean his insights into Cuba’s oppression? From the long discredited door-stopper, ‘The Black Book of Communism,’ a contradicting collection of essays written by reformed “fellow-travellers.”


Oddest of all though in Mark’s milquetoast meanderings is his criticism of President Castro’s alleged wealth. He claims (unattributed) a personal fortune of 550 million U.S. dollars to Fidel Castro. Why Mark, if that's true, doesn’t that make El Presidente your kind of people?

I'll present your article, Mark to Senor Pubillones for his consideration and, "Wait for it!" get back to you.


C.L. Cook is the media editor at pej.org and the producer and host of Gorilla Radio on CFUV Radio and gorillaradioblog.blogspot.com
Posted by Gorilla Radio Blog at Monday, March 21, 2005