Hooking up the Grid: Power Ships and Floating Nuclear Plants 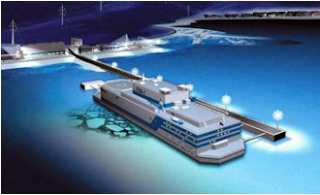 How do you overcome chronic power shortages in developing countries or in remote areas? “Power ships” and floating nuclear platforms.

First, we’ve got a massive new Turkish-owned vessel docked 100 meters off the coast of Beirut and hooked up to Lebanon’s electricity grid, delivering 188 megawatts of electricity daily.

A second Turkish ship is scheduled to arrive in Lebanon in August, which should bump it to 270 megawatts daily.


Akademik Lomonosov will be docked in Russia’s Far East
Kamchatka region, off the Arctic town of Vilyuchink

Second, we’ve got a much bigger endeavor—Russia’s plans for floating nuclear reactors to dock in the remote Arctic. This floating nuclear power plant—the first ever in the world--will have two 35-megawatt generators that will be able to supply power to remote Arctic communities directly from the ship. It’s the Akademik Lomonosov, and it’s slated for completion by 2016. Once it’s finished, the Russians—courtesy of Rosatom State Nuclear Energy Corporation--plan to build 4-6 more. The Akademik Lomonosov differs from the Turkish vessels in that it is not self-propelled; rather it must be towed to its destination.

The Akademik Lomonosov is an autonomous power facility, manufactured as non-self-propelled vessel. It is 140m long, 30m wide and 10m high. It has a draught of 5.56m. Its displacement is 21,500t with a crew of 70 people.

Once it’s docked, it will be able to provide electric power through two light-water reactors, heat, and fresh water through a desalination plant that operates on the excess heat produced by the reactors. Specifically, the floating nuclear ship will be able to produce about 70 megawatts of electricity and over 60 gallons of fresh water.

Floating Power Ships—Lebanon and Beyond


The ship docked off Beirut, the Fatmagül Sultan, is a $370 million, three-year agreement between the government and Lebanon and the ship’s operator, Turkish energy company Karadeniz Holding--and it’s only one of a fleet of seven that came online in 2007. Five more are in the construction phase. These Turkish vessels have operated in Iraq and Pakistan, and Karadeniz has had its eye on other energy-crisis destinations in Africa, including Libya.

It’s certainly not a long-term solution, but because it’s roving power, it will almost always be in demand—somewhere.

For Lebanon, the Fatmagül Sultan provides an additional two hours of electricity a day, which is most important in the summer months when demand spikes. The ship is meant to be only a temporary solution—buying the government three years to re-haul its power plants.

The Turkish endeavor in Lebanon is a brilliant idea, but it hasn’t been without its hiccups. The second Turkish power ship was supposed to arrive in June, but has been delayed until August due to technical issues. Also the first power ship halted electricity production in April and only resume in early June during which time it awaited new fuel shipments and conducted repairs. Lebanon is entitled to $82,000 a day in delay fees.


The Akademik Lomonosov will be docked in Russia’s Far East Kamchatka region, off the Arctic town of Vilyuchink, where there is already a new pier waiting for it. The nuclear reactors are designed to operate similar to traditional small nuclear reactors, and the ship has a 40-year lifespan, with fuel recycled every dozen years or so. But the question on everyone’s mind is “are they safe”? Well, no one can answer that with any accuracy, but surely things are steadier on land than at sea.

Rosatom says the vessels can withstand any load and are impervious to extreme weather conditions, including tsunamis, collisions with other vessels, or running aground. And Kamchatka is no stranger to extreme marine weather conditions. Kamchatka is also home to frequent seismic activity, which has the area’s residents a bit concerned about the implications of floating nuclear power plant nearby. The greatest concern is that the floating plant will be expelling radioactive steam, and environmental groups aren’t buying declarations that the ship is tsunami-proof. The general consensus among environmental groups is that floating is more dangerous than stationary because there are more weather variables that could cause an accident.

Rosatom likes the idea of a floating, mobile nuclear power plant, but detractors say they don’t see the cost-effectiveness here. Bellona, the Russian nuclear watchdog group, argues that it costs at least five times more to launch a low-capacity floating nuclear power plant than it does to build a stationary 1,000-megawat power plant. (See the full Bellona report here.)

During the Vietnam war, the US Department of Defense also operated a 10-megawat floating nuclear power plant, the Sturgis. But applications for anything but military use never really got off the ground. The US tried out its own floating nuclear power plant project in 1974—in the Atlantic Ocean, just offshore Atlantic City, New Jersey—but abandoned the project because it was too expensive and the public was pressuring the government over safety concerns.

Bottom Line: We like the Turkish initiative because we see commercial viability and real demand for this, though only as a roving temporary power solution for developing countries or for situations of temporary severe energy shortage. We’re not thrilled with Rosatom’s floating nuclear power plant, mostly because we don’t see any economic sense in it, and history has demonstrated this. Certainly, it’s nothing that should attract private investment.
Posted by Gorilla Radio Blog at Friday, August 02, 2013