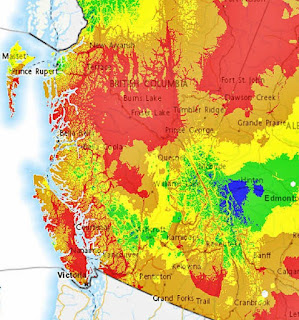 As all these voracious fires devour the BC forest and our carbon footprint begins to dwarf that of the Alberta tar sands, British Columbians need to consider their own significant culpability in contributing to global heating.

The clearcutting allows for wind egress, accelerating ground fires into the edge forest, and from there, laddering fire right up into the fringe canopy. Clearcut-desiccated land accelerates the spread of fire!

In all the national gnashing of teeth over the BC forest fire emergency, I challenge anyone to show me any significant discussion on the direct culpability of Big Industrial Logging to this ongoing climatic disaster.

Ingmar Lee is a long-time, BC-based environmental defender. From the Nanaimo watershed and first-growth valley bottoms of Vancouver Island, to the nuclear plant-threatened coastline of India, and the threatened shores and Sandhill Crane nesting grounds of British Columbia’s mid-coast, Ingmar has advocated for and stood between an increasingly fragile ecosystem and the rapine destructiveness of big business and its government enablers.


Personal disclosure: I admit that I am not a scientist under the employ of BC's corporate logging industry, -such as every single ABCFP in the province- so WTF would I know about logging and its relationship to  massive forest fires...?

one of my first treeplanting jobs took me through the forested pass just south of harrison hot springs into a valley that was stripped bare, from river bed to the top as far as i could see - it was early fall and that was my first experience with horizontal sleet that came whipping down the valley.

i saw many more such clearcuts during those 12 years and some, late in the season they were dry as bone.

i once flew over the estevan division on the west coast of vancouver
island, and for the two hours we were helicoptering from clearcut to
clearcut so that we could put in planting bids, all we saw were clearcuts in various stages of greening up, and not one bit of ancient forest, until we flew over a ridge and one such small valley came into view - there was a clearcut at the top but the rest of the valley was old forest - it was the walbran, a tiny oasis in a vast, devastated landscape.