NAFTA 2.0 Enshrines Deregulation for all of North America 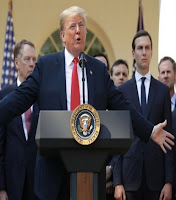 The new agreement, now named the U.S.-Mexico-Canada agreement or USMCA, seems to be a mixed bag of things that both corporate America wanted and that unions support.

For example, on the issue of auto manufacturing, the USMCA requires a higher percentage of domestically produced parts in order to qualify for zero tariffs when exported. Also, on wages, it requires workers to be paid an average of sixteen dollars per hour in order to be exempt from tariffs.

However, on copyright issues, the deal strengthens the hand of corporations by forcing countries to adopt U.S. copyright protections, which will have an effect on keeping drug prices higher than they otherwise would be.

To examine the effect of NAFTA 2.0, or the USMCA, on the environment and on food safety, is Patrick Woodall. Patrick is the Research Director for the group Food and Water Watch.

Trump’s re-negotiated NAFTA, now called the USMCA, pushes food safety and other forms of deregulation to new extremes, making it more difficult to undo the damage even after Trump leaves office, says Patrick Woodall of Food and Water Watch.