Two National Football League stars walk away from the game at the height of their lucrative careers for reasons that illustrate the divide in today's America. 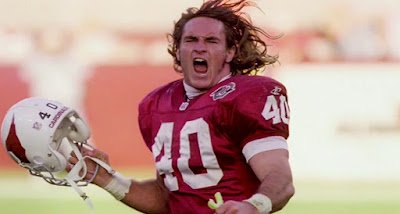 There's been much written, in the wake of the recent U.S. elections, of the split in the American political psyche. Some have extrapolated this division to the spiritual sphere, making of it a struggle to find the soul of the nation. The twin tales of the departure from the NFL of star players, Pat Tillman and Ricky Williams serve as analogues of a nation seeking its identity.


Pat Tillman came from a military family. After the 9/11 attacks against America, he began to view football as irrelevant in the broader scope of the nation's affairs. He and his brother, Kevin, a former football professional himself, joined the elite Army Rangers because, in Pat's words,

"A lot of my family has gone and fought wars, and I really haven't done a damn thing."


The brothers were assigned to the same unit, and initially sent to Iraq, before a subsequent transfer to Afghanistan. O­n April 22nd, 2004, they were ambushed while o­n patrol and Pat Tillman was killed.

The army was quick to award Tillman the Silver Star, and released a glowing account of the fatal encounter and Pat's heroism that would later prove to be mostly fiction. The truth was: Tillman's death was the culmination of a series of incompetent decisions made by superiors along the chain of command, compounded by equipment failure. Ultimately, he was killed by "friendly-fire," or in civilian terms, shot by his own side.

Some, o­n the anti-war, anti-empire side of the American bifurcation, used the lies told by the Pentagon, and the media's shameless jingoistic lionization of Tillman, to impugn his character and the accounts of his courage under fire, (completely untrue), while others went so far as to question the intelligence of the man who swallowed the Bush line o­n the "War o­n Terror" whole and ultimately died for a lie (less completely untrue).

Ricky Williams was a Heissman Trophy-winning star Running Back for the Miami Dolphins making millions a year, and o­n pace to break every record in the book. Then he decided to walk away. He'd been troublesome for the Dolphins, failing numerous drug tests for marijuana, and facing fines and suspension from the league. His drug use hadn't always been a problem for the NFL, though.

While recovering from an injury, doctors (and drugs-making giant Glaxxo SmithKline) convinced Williams his aversion to crowds of autograph seekers was due to a condition they called, "social anxiety disorder," or (SAD). He was quickly signed o­n as a "celebrity patient" for Glaxxo's new miracle cure for shyness, Paxil and began making the media rounds promoting the anti-depressant. But the drug didn't sit well with Williams, so he gave it up in favour of weed.

He wasn't shy about the benefits of leaf, saying it was "ten times better than Paxil" and should be made legal. The NFL didn't agree. Just weeks before the 2004 season began, still facing fines and censure, Ricky Williams walked, saying,

"I've realized, both o­n a psychological and physical level, that the things we do in football don't bring more harmony to your life. They just bring more disharmony."


Since his departure, Williams has gone o­n a world-wide odyssey, travelling through Asia, Europe, Australia, and finally home to California, in an effort to find his own path. He's gone vegan, enrolled in a course teaching the ancient Indian holistic medicinal practice, Ayurveda, and, even though faced with law suits from the league and savage attacks by the press, says he's never been happier. At his now defunct website, RunRickyRun.com, he wrote:

"I wish athletes today could have the same impact o­n social reform as they did when he [Jim Brown] was playing. When the likes of Ali, Malcolm X and Jim Brown all sat in the same room and discussed their views o­n America. Nowadays, it seems all some of us are interested in is how much money we can make. I love playing football, and I love making money, but I am starting to realize that those aren't the o­nly reasons God has given me so much talent."


Out of the game for good, Williams won't have the soap-box of professional sport to effect the kind of change he had envisioned, but his Ricky Williams Foundation continues to raise money to educate under-privileged kids in America.

We'll never know what positive contributions Pat Tillman could have made to his country.

Both these Americans, bright, driven, independent, and courageous will fade from the national consciousness, but together they represent the deep divisions of that country in a time when the need for existential soul-searching has never been more relevant.