The Failure: The Media's War 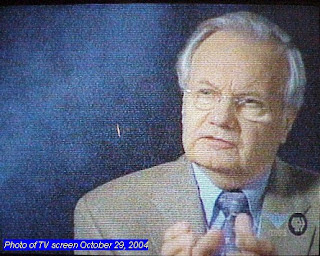 A new documentary by Bill Moyers examines the failure of the American press and media to alert the public about the deceptive propaganda used by the Bush administration to initiate the Iraq invasion.

Bill Moyers and the Failure of America's Media

Bill Moyers is not the first American to ask with regard media coverage of the run-up to the invasion of Iraq: "How did the mainstream press get it so wrong?"


The man who has been a White House press secretary, newspaper publisher, author and television news program host is not alone in wondering: "How did the evidence disputing (Bush administration claims and intimations regarding) the existence of weapons of mass destruction and the link between Saddam Hussein to 9-11 continue to go largely unreported?"


But Moyers has done something that most Americans have not had the time, the resources or the contacts to do, and that is answer the fundamental questions about the failure of print, broadcast and cable news outlets to cut through the spin and give the American people the truth about the Bush administration's unwarranted rush to war.


"What the conservative media did was easy to fathom; they had been cheerleaders for the White House from the beginning and were simply continuing to rally the public behind the President -- no questions asked," explains Moyers. "How mainstream journalists suspended skepticism and scrutiny remains an issue of significance that the media has not satisfactorily explored. How the administration marketed the war to the American people has been well covered, but critical questions remain: How and why did the press buy it, and what does it say about the role of journalists in helping the public sort out fact from propaganda?"


These and the premises and purposes of a remarkable new documentary, "Buying the War," which explores the role of the press in the lead-up to the 2003 invasion of Iraq. The 90-minute production, which airs this week beginning April 25, on the Public Broadcasting Service channels across the country, is the special premiere of a new weekly series, "Bill Moyers Journal."


After Wednesday night's premiere, Moyers will return to PBS on the Friday night schedule where he was resident for a number of years as the host of "NOW with Bill Moyers." And, just as he did before leaving "NOW" several years ago, at a time when President Bush's allies and appointees were attacking him for giving air time to administration critics -- including Republicans such as Nebraska Senator Chuck Hagel -- Moyers is still practicing the craft of journalism in the manner intended by the rebels against empire who wrote a "freedom of the press" protection into America's founding document.


In other words, he is refusing to be a stenographer for the powerful.


"Buying the War" highlights that refusal.


In the documentary, Moyers interviews former CBS news anchor Dan Rather, NBC's "Meet the Press" host Tim Russert, former CNN president Walter Isaacson, and many of the top American print and broadcast reporters. He challenges them. He presses them. He gets them to acknowledge not just the drastic flaws in the reporting before and immediately after the invasion of Iraq but also the extent to which those flaws illustrate the deeper crisis of today's "on-bended-knee" media.


The veteran CBS Middle East correspondent, Bob Simon, sums up that crisis when he refers to the Washington press corps as operating "in a bubble" shaped by the Bush administration.


"Buying the War" is not a polemic. Rather, it is an aggressively and thoroughly reported critique of pre-war media coverage, which celebrates the handful of journalists -- particularly those with the old Knight-Ridder Washington bureau -- who asked the right questions, while solemnly detailing the reality that most media merely repeated administration claims as if they were truths that could not be debated.


Remarkably, and importantly, Moyers gets journalists who are still in the game to explain where things went wrong. For instance, Washington Post media critic Howard Kurtz notes, "From August 2002 until the war was launched in March of 2003 there were about 140 front page pieces in the Washington Post making the administration's case for war. But there was only a handful of stories that ran on the front page that made the opposite case. Or, if not making the opposite case, raised questions."


What Moyers has produced is a chilling account of what happens in a republic where the media, for the most part, becomes a mouthpiece for the government. As Walter Pincus, one of the last of the great Washington reporters, explains to Moyers, "More and more the media become, I think, common carriers of administration statements and critics of the administration. We've sort of given up being independent on our own."


That surrender of independence destroys the whole matter of a free press, just as it prevents citizens from gaining the information and insight needed to be functional players in America's democratic experiment. But even in this dark interregnum, there is hope for freedom of the press -- and for the democracy it sustains. Bill Moyers is back on the air.


John Nichols is the Washington correspondent for The Nation magazine.