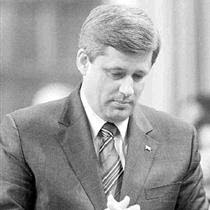 Canada's complicity in torture has been a motivation for the many groups across the country advocating for troops out of Afghanistan. Those who have defended the current NATO mission as a “humanitarian intervention” have lost a lot of credibility this week.
by Derrick O'Keefe
April 27, 2007
Is this Canada's Abu Ghraib?

There are, to be sure, significant differences between the torture scandal currently engulfing Ottawa and the one that rocked the Bush administration three years ago. There are no gruesome photos and, unlike the U.S. abuse of Iraqi detainees, the torture in Afghanistan is being done by Canada's local allies.

But in many ways this scandal is equal to the outrage of Abu Ghraib. With the photographic evidence of the abuse in Iraq, even old Donald Rumsfeld could not have pulled the straight-faced performance of Stephen Harper and Gordon O'Connor in the House of Commons this week.

Faced with the shocking accounts from Afghan detainees featured in The Globe and Mail this week, Harper had the audacity on Tuesday to dismiss the reports as “allegations of the Taliban.”

Graeme Smith, The Globe and Mail correspondent in Afghanistan (and, by the Prime Minister's appalling logic, a Taliban spokesperson), conducted weeks of research touring “medieval nightmare” prisons and interviewing 30 detainees. Smith recorded accounts of beatings, electric shock, whipping, freezing and starvation among the methods employed by the security forces to which Canadian soldiers turned over their detainees.

On Wednesday, The Globe and Mail delivered the knockout punch to Harper's and the Conservatives' evasions and denials. The headline summed it all up, “What Ottawa doesn't want you to know: Government was told detainees often faced 'extrajudicial executions, disappearances, torture and detention without trial'.”

A 2006 report on Afghanistan compiled for Foreign Affairs Canada provides proof that the Conservative government knew about all of this, contrary to everything O'Connor and the PM have been saying for months - and what they, incredibly, continued to assert in the House this week. Key passages of the Afghanistan report were blacked out, but The Globe and Mail obtained an original copy. The censored content, what Ottawa didn't want us to know, includes the following passages:

Despite some positive developments, the overall human rights situation in Afghanistan deteriorated in 2006.

Extra judicial executions, disappearances, torture and detention without trial are all too common. Freedom of expression still faces serious obstacles, there are serious deficiencies in adherence to the rule of law and due process by police and judicial officials. Impunity remains a problem in the aftermath of three decades of war and much needed reforms of the judiciary systems remain to be implemented. (The Globe and Mail, A1, April 25, 2007)

It is important to note that the torture scandal that has exploded in recent days is something that the anti-war movement and human rights activists have been trying to expose for years. Lawyers Against War, Amnesty International and academics like University of British Columbia professor Dr. Michael Byers have long been sounding the alarm that Canada was in violation of the Geneva Convention by handing over detainees to almost certain torture and abuse.

This includes, lest we forget, handing over prisoners to U.S. authorities, who have established their own facilities for “enemy combatants” at Bagram Airbase in Afghanistan and the infamous Guantanamo base on occupied Cuban territory.

Canada's complicity in torture has also been a motivation for the many groups across the country advocating for troops out of Afghanistan. Those who have defended the current NATO mission as a “humanitarian intervention” have lost a lot of credibility this week.

For instance, in a recent feature essay in This Magazine, Vancouver journalist Jared Ferrie does not mention torture once and makes a bold assertion, “for all its flaws, the current Afghan government's human rights record is light years ahead of any in the past three decades.”

Rather than “light years ahead,” Afghanistan's current situation looks like more of the same that the country has endured for decades: Counter-insurgency war, corrupt government, “medieval” prisons and widespread torture. This has accompanied the long tradition of foreign intervention, pursued in turn by the UK, the USSR and the U.S.

Canada is now deeply complicit in all of this, and neither the denials of Stephen Harper nor the rationalizations of liberal interventionists will be able to change that fact.

Derrick O'Keefe is a founding editor of the weekly on-line journal Seven Oaks Magazine and a co-chair of Vancouver's StopWar coalition.