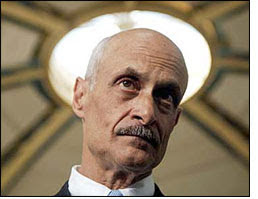 Team Chertoff and the Art of Political Prosecution

Current and former Justice Department officials I have interviewed have consistently identified Michael Chertoff, his successor Alice Fisher and his protégé Noel Hillman, as figures with a strong interest in political prosecutions. Each apparently took an interest in the Siegelman case for all the wrong reasons, I am told, and each had regular communications with the White House throughout this period.

But the Siegelman case was only one of many cases with political overtones which were closely dogged by loyal Republican Party activists at the top of the criminal process at Justice. Today the Los Angeles Times is offering more evidence linking Chertoff to political vendettas using the prosecutorial resources of the Department of Justice. David Savage and Tom Hamburger report:

Shortly after President Bush took office in 2001, Michael Chertoff, then head of the Justice Department’s criminal division, met with the conservative group Judicial Watch. It wanted criminal charges brought against Hillary Rodham Clinton in connection with a lavish fundraising event in Los Angeles the year before.

“Chertoff personally assured us he would pursue it,” the group’s president, Tom Fitton, said recently, recalling the meeting with several top Justice officials. “They said they weren’t afraid of taking on the Clintons.” Justice did not pursue a case against the senator from New York, but instead went after one of her fundraisers, David Rosen, who eventually was acquitted.

Now Atty. Gen. Alberto R. Gonzales has announced his resignation, brought down in part by allegations that he let politics influence Justice Department decisions. And Chertoff, secretary of the Department of Homeland Security, is a prominent candidate to succeed him. Justice Department officials say pressure from Judicial Watch — which made its name by suing the Clintons in the 1990s — played no role in the decision to prosecute Rosen. Chertoff will not discuss the case. But it seems to be an early example of department actions under Bush that critics say were tinged with partisanship.

The key to Chertoff’s politicization of the prosecutorial service lay in placing a key political protégé in a key position: Noel Hillman was put in charge of the Public Integrity Section, the Justice Department’s division responsible for investigating and prosecuting public officials.

When Chertoff took over the criminal division, one of his first targets for change was the Public Integrity Section. This unit, established after the Watergate scandal, handled corruption cases involving public officials and others with political ties. It had a reputation as nonpartisan, professional and cautious.

Chertoff demoted career prosecutor Lee J. Radek, who had headed the section for many years, and eventually brought in a New Jersey protege, Noel L. Hillman. “There is a new sheriff in town,” Hillman told a lawyers’ group shortly after taking over…

Others… said they were concerned that the unit’s traditional insulation from partisan pressures had become frayed under Chertoff and Hillman. Hillman raised eyebrows by seeking — and eventually getting — a White House appointment to a federal judgeship. According to one veteran prosecutor, there was “a new intensity of interest among top officials like Chertoff in what cases were pursued or not pursued.” The prosecutor requested anonymity because he remains in government service and is not authorized to speak to reporters.

Noel Hillman took an extraordinary and aggressive role in pushing the Siegelman case forward around the same time that, according to an affidavit submitted by a Republican campaign attorney, Jill Simpson, Karl Rove was speaking with senior Alabama G.O.P. figures about using the Justice Department to “get rid of” Siegelman. Hillman then proceeded to apply for and obtain a judicial appointment—to the U.S. District Court in New Jersey. He acknowledges spending several months in discussions with the White House about his judicial appointment. It doesn’t require a lot of imagination to think of other topics that might have figured in these discussions, conducted with the man who was handling the Abramoff case, as well as the Siegelman prosecution.

Hillman was touted throughout this period as the “Abramoff prosecutor,” though that’s a title that requires quite a bit of qualification. Indeed, the Public Integrity Section did go after JackAbramoff, Michael Scanlon and a number of other key figures. But a study of the way their investigation trailed off in Alabama raises strong suspicions. Evidence pointed to the funneling of millions of dollars in Mississippi Choctaw Indian money into the campaign of Don Siegelman’s adversary, Bob Riley. The project involved a significant number of Riley’s Congressional and campaign staff, many of whom had direct links to Abramoff. However, instead of looking into these connections, Hillman began to channel his investigative and prosecutorial resources into an amazing quest to “get Siegelman.” And that assured that the Alabama leads of the Abramoff case were dropped and went dead. In fact they seem to have been dropped right about the time that President Bush decided to have a secret meeting with judicial candidate Hillman.

The Los Angeles Times report concerning the highly political vendetta prosecution of Rosen greatly strengthens the accusations made by a Michigan attorney, Geoffrey Fieger, in a case with strong parallels and similar political circumstances. It also casts a strong light on the mindset and working relationships within Justice at the time the chase after Alabama Governor Siegelman began.