Chemtrails and the Great Bee Die-Off 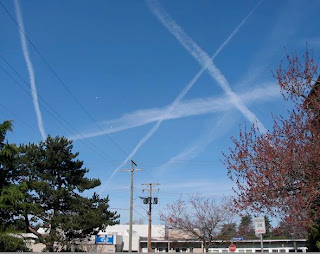 Okay, on the surface trying to link massive honey bee die-offs to the puzzling Chemtrails crisscrossing our skies may seem a stretch.

But for lack of good explanations for either the honey bee die-offs (colony collapse disorder) or the Chemtrails phenomena, let’s just examine what connection, if any, might be teased from what is actually known about the two.

First, there is a time factor. In Scientific American (Sept.2013) an article on how native bees may be the answer to the die-off of European honey bees (who were brought here around 1620) is the account of the first reported colony collapse disorder of honeybees:

“In the fall of 2006 a now legendary beekeeper named Dave Hackenberg discovered that 360 out of his 400 hives in Florida were lifeless-no bees in sight. They waited, fully stocked with pollen, honey, and larvae-like ghost ships-for their inhabitants to return…but the bees never came back.”


And other beekeepers also soon started reporting the deaths of their hives with no apparent explanation. Suddenly. All gone, in one day. Like some kind of bomb had been dropped on them (the honey bees) while they worked in the fields. As noted, this started happening in 2006.

From the website Chemtrails Debunked-Skeptic-Project a site that denies the existence of Chemtrails, we learn that some of the first accounts of ordinary citizens concerned about the patterns in the sky left by airplanes started about the same time as the honey bee die-offs. Others (on the internet) say the patterns are actually a spray that is being used to control in some way the actions of humans. Others think it is a spray composed of compounds that has the power to control the weather (global warming). Whatever the purpose is, a lot of people are freaked out by Chemtrails and I’m getting more freaked all the time. And even though I live not far from an air force base and notice these strange patterns in the sky frequently I have been loath to believe that our government would spray chemicals into the atmosphere that could harm the living things below. But I’m really beginning to wonder if there are connections between the Chemtrails and health.

So are the Europeans. One theory is that all WTO nations must be in the Chemtrail spraying program and they are apparently cooperating. Way back in 2004 an article published in the German magazine ChemicaRaum+Zeit (Space and Time) reposted under Chemicals- Spraying in our Sky describes the planes leaving Chemtrails over Germany:

“At first these aircraft appear to be leaving vapor trails, but after observing them for a while one starts to have one’s doubts: These ‘vapor trails’, which are laid out in a regular, gigantic criss-cross pattern do not disperse in a matter of minutes, but hang motionless in the air; one could almost speak of an adhesive effect. Often a pearl-necklace-like pattern of the vapor is recognizable, which can also turn into a sequence of large “drops”.”


This same article goes on to explain that in spite of the difficulties of collecting air samples of the Chemtrails at the altitude of 6000 meters samples were obtained and microscopic examination revealed “a synthetic carrier substance of polymer threads (together with other unidentified components) contained traces of “(so-called ‘non-radioactive) barium salts, and microscopic particles of aluminum in a (relative to standard air levels) sevenfold higher concentration) and goes on to note:

“In research of Alzheimer’s disease, aluminum poisoning of the body is specifically known to be an important factor!”


But we are talking honey bees here and the colony collapse disorder. Yes, I think neonicotinoids are disastrous for bees too, (Europe has banned them for two years) as are all the pesticides. And yes, I’m sure these chemicals can and do kill the honey bees. But death from pesticides seems to be of a different nature; rather slow and drawn out (comparatively speaking) as I understand it. It’s the suddenness of the deaths of some of the hives that really, really needs investigating.

Unlike most of the domestic bees who are loners and don’t make hives, honey bees are social animals. They go to work together, in a bunch. The sudden dying off (instantaneously?) of the entire bunch of honey bees at one time in the fields as they work is telling us something we should know. This suddenness bespeaks of a massive overwhelming poisoning…like a spray of some kind. The honey bees from these sudden die offs were obviously healthy enough to go to work. I think they were sprayed by a substance that was deadly to them. Could it have been the spraying from Chemtrails?

This Week on GR by C. L. Cook - Gorilla-Radio.com July 2, 2020 Welcome to Gorilla Radio’s continuing efforts, NOT broadcast live from...