“Most of the Hunger Strikers Are Vomiting on the Torture Chairs”: Emad Hassan’s Latest Harrowing Letter from Guantánamo 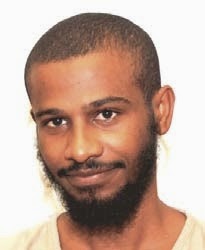 In the long-running struggle by prisoners at Guantánamo to get US judges to order the prison authorities to stop force-feeding them when they are on a hunger strike to protest about their indefinite imprisonment without charge or trial, the focus in the last few months has been on Abu Wa’el Dhiab, a Syrian prisoner, cleared for release in 2009 by the high-level, inter-agency Guantánamo Review Task Force that President Obama appointed shortly after taking office, but still held, like 78 other prisoners cleared for release.

In May, in Washington D.C., District Judge Gladys Kessler delivered a powerful and unprecedented ruling in Mr. Dhiab’s case, ordering the government to stop force-feeding him, and also ordering the release, to his lawyers, of videotapes showing his force-feeding and “forcible cell extractions” (FCEs), where prisoners are violently extracted from their cells by a group of armored guards and taken for force-feeding after refusing to voluntarily drink the liquid nutritional supplements given to hunger strikers.

The order regarding Mr. Dhiab’s force-feeding was withdrawn by Judge Kessler shortly after it was issued, as she feared that otherwise Mr. Dhiab would die, but the videotapes have been seen by his lawyers, who described them as profoundly shocking — and 16 US media organizations are currently engaged in trying to get the videotapes released to the public.

Last week, Mr. Dhiab secured another victory, when Judge Kessler ordered the government to allow two independent doctors to visit him to assess the state of his health.

It may well be that the Obama administration will soon prevent Mr. Dhiab from causing them further irritation by releasing him to Uruguay, which has offered a new home to him and to five other men long cleared for release who, like Mr. Dhiab, cannot be safely repatriated.

However, two other hunger striking prisoners — Emad Hassan, a Yemeni, and Ahmad Rabbani, a Pakistani — have already submitted motions following up on the precedent established in Mr. Dhiab’s case, as I reported here. Rulings have not yet been delivered in these cases, but three weeks ago, Mr. Hassan, a prolific letter-writer, who, as Reprieve described it, has been “abusively force-fed more than 5,000 times since 2007 as part of the military’s efforts to break his hunger strike,” wrote a letter to Judge Kessler that was submitted by his lawyers, at the legal action charity Reprieve, in Abu Wa’el Dhaib’s case, even though Judge Kessler is not presiding over his own case.

In his letter, Hassan wrote about the latest developments in the force-feeding program, describing how “[m]ost of the hunger strikers are vomiting on the torture chairs,” and noting how what is happening now is reminiscent of the events of June 2006, when three long-term hunger strikers died, reportedly by committing suicide — although the official story has long been challenged by personnel working at Guantánamo at the time, and by serious discrepancies and omissions in the internal investigation that followed the deaths.

In his letter, which includes references to a specific prisoner who is believed to be Abu Wa’el Dhiab, Emad Hassan wrote:

Many times I write a letter to describe the events here, in detail. Specific[a]lly, the hunger strikes. I stop! I can’t keep up with it. I have to go with what is going now. As right now: the F.C.E. team took him to be fed. The SMO [Senior Medical Officer] boosted his feed to two can[s] of [E]nsure plus 1 can of TwoCal. It took ten minutes for his stomach to hold the formula [and he] then began vomiting horribly.

I stopped my writting [sic]. I could not continue untill [sic] my brother stopped. I took a pen to resume my writing. Six lines, again, my brother start vomiting. The tube came from my mouth as the liquid gush from his stomach through his mouth.

What’s happening now remined [sic] me of 2006 events! Most of the hunger strikers are vomiting on the torture chairs. Under the ventilation hole in the roof the air beat him on the head. Very, very cold. 74 degree. The nurse or corpsman come to one. Will you drink or the F.C.E. team? The threatening tone is unmistakable.


Mr. Hassan went on to describe Judge Kessler as “the one who shows kind of empathy, understandable and HOPE,” and stated:

You are not alone in the road of justice, listen with me to the first bishop woman, Barbara Clementine Harris [the first woman to be ordained as a bishop in the Anglican Communion, in 1980]: “No one expect[s] us to eliminate all the evils of the world, nor to liberate all those who are oppressed, nor to feed all who are hungry, or to house the millions who are homeless. But when the oppressed see one who fight[s] for liberation, their burden become[s] lightened because they know that somebody stand[s] with them.”

Your honor: how one person, detainee his health condison [sic] [is] in danger and [he] could die! At the same time, send the F.C.E. team to pick him up to be fed. Isn’t [it] a contrad[iction ?] Is it?!

Your honor: It is a great responsible [sic] on your shoulder. Every ward [sic], action or hint from you will be taken sirious [sic]. There are many people watching you, a right and wrong pleas. Follow your faith. [...]

You honor: You are an human [sic]. Would you let anyone humiliate you, spit on your face, or let him abolish your existence! [T]hink about it.


Speaking to Jason Leopold of VICE News, Alka Pradhan, one of Mr. Hassan’s lawyers at Reprieve, said that it was “unprecedented” for a Guantánamo prisoner to be able to “speak directly to a judge.” As Leopold described it, Pradhan had “tried in the past to get Guantánamo’s strict security censors to clear letters written by other detainees to federal judges, but she was always rebuffed.”

“We were surprised the whole thing was unclassified. It’s amazing to see because it gives Judge Kessler an idea of what men are going through in their own words. Usually in a Guantánamo case the judge is dealing with a person she has never seen. There’s no way to make that human connection without this sort of evidence. This letter is the closest we can get to having the person’s face and voice in the courtroom.”


Pradhan also confirmed that her client continues to be force-fed twice a day, seven years after he first began his hunger strike. “They still take out tubes and reinsert them everyday,” she told Leopold. “He will occasionally drink the liquid nutrient. One of his nostrils is completely closed up. He only has one working nostril. But it gets infected and sore. That’s why he tries to drink the liquid nutrient.”

She also explained that she thought Mr. Hassan was “describing policy changes that have been implemented since the arrival of a new Guantánamo warden and commander of the detention facility last month,” as Jason Leopold put it.” She said, “Every time you get a new commander, they will tighten up the rules if they had loosened before, and that’s what I think we’re seeing.”

Leopold also spoke to Guantánamo spokesman Navy Capt. Tom Gresback, who claimed that “there have been no major changes to the force-feeding policies,” as Leopold described it, reading from the carefully-prepared script that describes hunger strikes as “non-religious fasting,” and force-feeding as “enteral feeding.”

“Enteral feeding provided by the medical staff at Joint Task Force-Guantánamo (JTF-GTMO) to the detainees who choose to participate in non-religious fasting is prescribed following strict Standard Operating Procedures which are based on established medical protocols,” Capt. Gresback said. “With the exception of modifying the SOP to now use a water-based lubricant, the SOP for enteral feeding at JTF-GTMO has not changed.”


He added, as Leopold described it, that “any procedures that have been characterized as violent at Guantánamo ‘are in compliance with US law’” — a claim that contradicts the assertions, made by medical professionals worldwide, that force-feeding is akin to torture.

Andy Worthington is a freelance investigative journalist, activist, author, photographer and film-maker. He is the co-founder of the “Close Guantánamo” campaign, and the author of The Guantánamo Files: The Stories of the 774 Detainees in America’s Illegal Prison (published by Pluto Press, distributed by Macmillan in the US, and available from Amazon — click on the following for the US and the UK) and of two other books: Stonehenge: Celebration and Subversion and The Battle of the Beanfield. He is also the co-director (with Polly Nash) of the documentary film, “Outside the Law: Stories from Guantánamo” (available on DVD here – or here for the US).

Please also consider joining the “Close Guantánamo” campaign, and, if you appreciate Andy’s work, feel free to make a donation.