by BC Civil Liberties Association

VANCOUVER – Coast Salish Territory – Nearly two years after the BCCLA and the Union of BC Indian Chiefs called for the public release of the cellblock videotape of an assault on Robert Wright in the cells of the Terrace RCMP detachment, the footage has been released to the public for the first time.

Robert Wright in hospital after incident in Terrace RCMP cells

On April 21, 2012, Robert Wright, a 47-year-old construction worker at the time, was taken into custody by Terrace RCMP after his wife, Heather Prisk, called for police assistance.

While in custody, Wright received a disabling brain injury at the hands of police.

In one of the two incidents in which force was used on him, Wright was handcuffed and kneeling in a cell, facing the wall and being searched by three police officers when he was forcefully “taken to the ground” by one of the officers.

Wright sustained a head injury requiring twelve stitches and causing a traumatic brain injury. He had to be taken by air ambulance for emergency life-saving surgery in the lower mainland of BC, where he lay in a coma for 10 days. He remains seriously brain injured and suffers significant memory issues making independent living impossible.

Earlier this year, Mr. Wright filed a lawsuit against the RCMP constable who allegedly assaulted him. Recently, that lawsuit was amended to allege that the constable in question was on illegal steroids at the time. 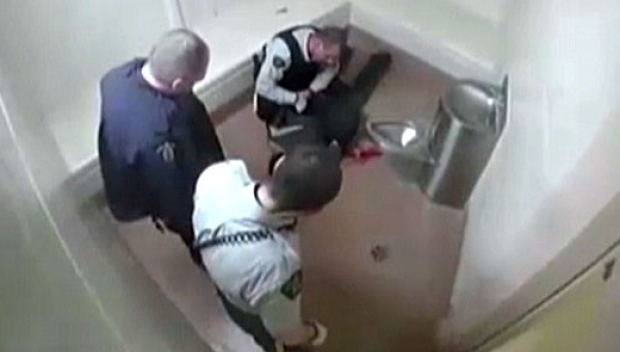 Robert Wright on the cell floor after being “taken to the ground”
by Terrace RCMP (Photo: screen cap from video provided by H. Prisk)

Josh Paterson, executive director of the BC Civil Liberties Association, reacted to the video:

“This is shocking. It appears on the video that this brutal takedown was an excessive use of force. Mr. Wright was kneeling on a bench, cuffed, and posing no apparent threat at the time that a constable smashed him to the floor, breaking his head open and leaving a pool of blood. Rob’s trip to the cells was life sentence to a permanent and debilitating brain injury. We hope that the family’s lawsuit will get to the bottom of why this happened, and that it will bring some measure of justice to the Wright-Prisk family.”


Grand Chief Stewart Phillip, President of the Union of BC Indian Chiefs, added:

“Two years ago I said I couldn’t imagine a scenario that would justify the cruel use of force against Robert Wright, who was kneeling, cuffed, and surrounded by police. In video, it appears that there was no justification. He was viciously and inhumanely assaulted. When will the violence against Indigenous people stop in this province? This video shows how little value was placed on Robert Wright’s humanity. He can never go back. He will never be the same. The police have got to be held accountable and we fully support them in this fight.”


The New Westminster Police Department investigated the case and recommended charges against at least one police officer; however, the regional Crown in New Westminster declined to approve those charges and proceed to trial. In declining to approve charges, the Criminal Justice Branch relied on a use of force expert report, surveillance video and audio, none of which have been publicly disclosed.

In November 2012, the BC Civil Liberties Association and the Union of BC Indian Chiefs called for the province to appoint a special prosecutor to review whether criminal charges should be laid. The BC government did not act on this request.

Grand Chief Phillip and Mr. Paterson visited Mr. Wright in Terrace in March 2013. Robert Wright continues to live with disabling brain injuries in Terrace in the full-time care of his wife, Heather Prisk-Wright.