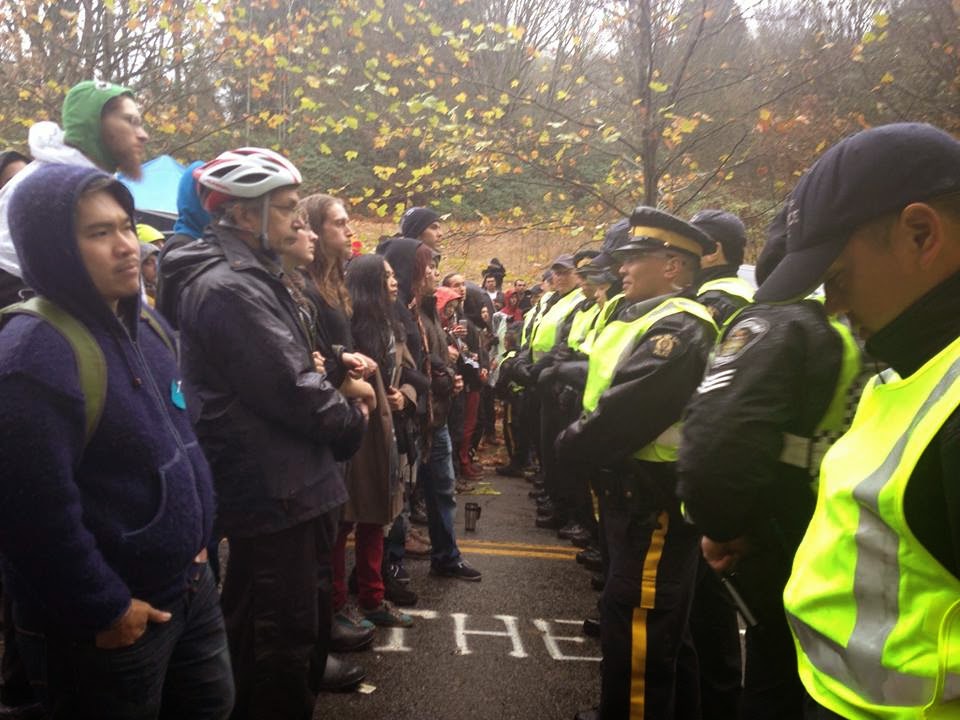 On Thursday 24 people were arrested on Burnaby Mountain by the RCMP, and Kinder Morgan moved in heavy equipment late at night to begin work after weeks of presence by caretakers opposed to their tar sands pipeline plans.

Burnaby residents, caretakers at Burnaby Mountain, and concerned groups say they remain undeterred in the face of these heavy-handed intimidation tactics.

Over 70% of Burnaby residents are opposed to Kinder Morgan’s $5.4 billion expansion proposal that would transport even more diluted bitumen and bring even more tankers to the Burrard Inlet. Indigenous rights, climate change, and protection of the lands and waters against corporate greed remain key issues in the movement against tar sands expansion.

At least three of those arrested were held overnight and have their bail hearing this morning at BC Supreme Court. Arrests included Sut-lut, a Sḵwx̱ú7mesh elder who started the sacred fire onsite; Kaleb Morrison and Erin Flegg who have been at the site for months; Adam Gold, a named defendant in Kinder Morgan's injunction and civil law suit, and a tree sitter who has been camped out on top of the Borehole 2 drill site.

What: Press Conference at Burnaby Mountain

Where: Centennial Way at Burnaby Mountain Parkway, Burnaby BC

Who: The press conference at the bottom of Burnaby Mountain will include:


- Tamo Campos: grandson of David Suzuki who was arrested
- Erin Flegg: a caretaker at Burnaby Mountain
- Lynne Quarmby: named defendant in the Kinder Morgan injunction
- Representative of the Union of BC Indian Chiefs

For updates on the situation: https://www.facebook.com/burnabymountain