Drone Base Booked by Peace Activists - Arrests Made

by Mary Anne Grady - War Is a Crime 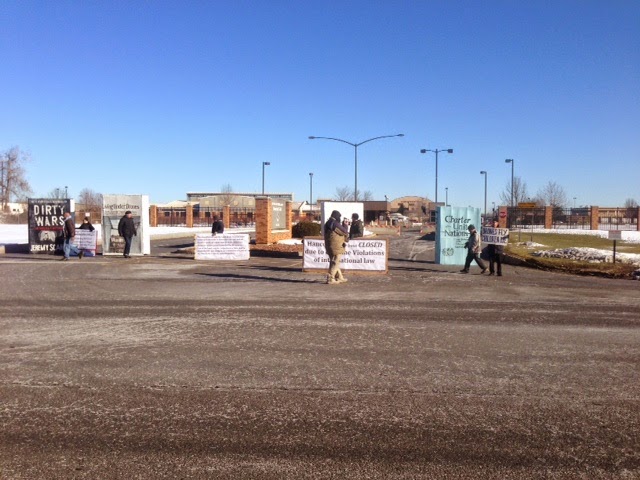 At 9:15 am on March 19, the 12th anniversary of the U.S.’ illegal invasion of Iraq, seven members of the Upstate Coalition to Ground the Drones and End the Wars shut the main gate of the Hancock Drone Base (near Syracuse, NY) with a giant copy of the UN Charter and three other giant books – Dirty Wars (Jeremy Scahill), Living Under Drones (NYU and Stanford Law Schools), and You Never Die Twice (Reprieve).

The nonviolent activists also held a banner quoting Article 6 of the U.S. Constitution, stating that every treaty signed becomes the supreme law of the land. They brought the books to Hancock to remind everyone at the base of the signed treaties that prohibit the killing of civilians and assassinations of human beings.

The group attempted yet again to deliver a citizens indictment for war crimes to the Hancock Air Base chain of command. In the indictment, the activists state, “There is hope for a better world when WE, THE PEOPLE, hold our government accountable to the laws and treaties that govern the use of lethal force and war. To the extent that we ignore our laws and constitution and allow for the unchecked use of lethal force by our government, allowing the government to kill who ever it wants, where ever it wants, how ever it wants with no accountability, we make the world less safe for children everywhere.”

One of the giant books, Living Under Drones: Death, Injury, and Trauma to Civilians from US Drone Practices in Pakistan, states that such missions are responsible for the deaths of hundreds of noncombatants, including women and children, in that region.

One of those arrested, Fr. Bill Pickard of Scranton, PA, stated, “The Reaper drone not only kills and maims humans; it destroys homes and displaces and terrorizes whole communities. U.S. taxpayers pay for such terrorism which perpetuates the violence and generates enormous ill will against the United States.”

Hancock hosts the 174th Attack Wing of the NY Air National Guard – the MQ9 Reaper drone hub. Drones flying over Afghanistan are piloted from the base. It is also a training center for drone pilots, sensor operators and maintenance technicians

Today’s action at Hancock’s main gate is one chapter in the Upstate Coalition to Ground the Drones and End the Wars’ (www.upstatedroneaction.org

) five-year scrupulously nonviolent campaign to expose the Hancock war crimes. Since 2010 there have been over 160 anti-Reaper arrests at Hancock, resulting in extreme bails, maximum fines, incarcerations, and Orders of Protection…as well as some acquittals.