The BC Liberal government and LNG industry suffered a blow this week with a final losing vote amongst Lax Kw’alaams Band members over a billion-dollar package offered to support Petronas’ Pacific NorthWest LNG plant near Prince Rupert.

At the same time, a much smaller, quieter deal was being signed by the elected leadership of the Lake Babine Nation, pertaining to the pipeline that would feed the coastal plant – the Prince Rupert Gas Transmission line. On the table in this “Project Agreement” between the 2,440-member band and pipeline contractor TransCanada was a comparatively paltry $3.56 million, plus a piece of a $10 million a year revenue sharing deal to be split amongst a number of First Nations along the pipeline route if it becomes operational.

According to the Prince George Citizen, the upfront sum of $3.56 million will be issued in the following phases:

When the agreement takes effect Lake Babine Nation will get $324,000, when construction begins they get $1.62 million, and then the same amount when the pipeline is in operation.


Lake Babine members must be scratching their heads wondering how their leaders settled for so little, while the Lax Kw’alaams Band at the end of the pipeline turned down what has been touted as $1.15 Billion in benefits over 40 years, following a series of votes amongst its members over the past week. All three votes, including one held for off-reserve members in Vancouver last night, went down to defeat. Even the BC government, desperate to see at least one of its many embattled LNG projects go forth, threw in 2,200 hectares of Crown land in the region, pegged at a value of $108-million.

Yet all the money and land couldn’t outweigh members’ concerns over the impacts of the massive plant proposed for Lelu Island on Skeena River salmon. A causeway for ships to dock at the plant would disturb vital eelgrass habitat in the estuary at Flora Bank (pictured above), warn scientists and conservation groups. For this very reason, a smaller coal plant operation was rejected by the federal government decades ago, when stocks were admittedly far healthier than today.


The proponent has agreed to make some modifications to its design and a conveniently-timed report which it paid for argues the impacts will be negligible. But independent scientists disagree, suggesting the project could collapse already troubled Skeena stocks. And let’s not forget – this is the same proponent that literally erased the entire Skeena River and estuary from its initial project maps! So it’s easy to see how a few project tweaks and a company report would do little to sway Lax Kw’alaams members.

The band’s high-profile rejection of the project is no doubt rippling through the Liberal Cabinet room today – yet another blow to the government’s one and only economic development policy. Yet many were quick to point out that the door is still open to PacificNorthwest LNG, despite this week’s setback. 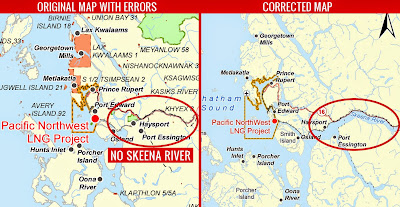 
There was lawyer David Austin – a longtime promoter of controversial energy projects in BC, including the government’s once-vaunted private river power scheme – ready to toss aside First Nations’ rights before the final votes had even been cast. The Canadian Press paraphrased his comments as follows:

Lelu Island is Crown land managed by the Prince Rupert Port Authority, which means the province technically has the authority to push ahead without support from the Lax Kw’alaams.

Even if the band proves it has aboriginal title — which would require proving it has had exclusive occupancy of the territory — Supreme Court precedent gives the province the right to override that claim.


Premier Clark also vowed that an agreement would yet be reached with the band and even Lax Kw’alaams’ councillors suggested they were still open to a deal on the project, so long as it avoided the contentious salmon habitat in Flora Bank. “Lax Kw’alaams is open to business, to development and to LNG,” including this particular project, a statement noted.

Meanwhile, agreements like the one signed by Lake Babine show that there are many more moves to be played out in this chess game. TransCanada boasts similarly vague agreements over the pipeline with the Nisga’a Lisims Government, Gitanyow First Nation and Kitselas First Nation.

And according to CP:


So the battle over Petronas’ LNG plant is far from over, yet with all the rhetoric and lack of real progress on the project, it’s starting to seem like it’s less about natural gas than hot air.


Damien Gillis is a Vancouver-based documentary filmmaker with a focus on environmental and social justice issues - especially relating to water, energy, and saving Canada's wild salmon - working with many environmental organizations in BC and around the world. He is the co-founder, along with Rafe Mair, of The Common Sense Canadian, and a board member of both the BC Environmental Network and the Haig-Brown Institute.

More articles by Damien Gillis
Posted by Gorilla Radio Blog at Thursday, May 14, 2015