Raincoast Conservation Foundation has launched a billboard information campaign addressing the inhumane slaughter of wolves that is occurring at the hands of the province of British Columbia. For at least the next five years, the B.C. government intends to kill hundreds of wolves by means of aerial gunning in the South Selkirk and South Peace regions of the province.

The province is marketing the slaughter as a conservation plan to "save endangered caribou." The provincial Ministry of Forests, Lands and Natural Resource Operations recently announced the first phase of the killing has been completed with an initial body count of 84 wolves.

This unscientific, unethical, and unwarranted wolf cull is a consequence of industrial logging and other human activity, which have transformed the caribou's habitat into a landscape that can no longer provide the food, cover, and security these animals need to survive. Rather than address the real problem, i.e., the destruction of life sustaining caribou habitat, the B.C. government has chosen to scapegoat wolves. The aim of Raincoast's billboard campaign is to bring attention to that deplorable decision.

Brad Hill, a biologist and professional photographer, provided the wolf image for the billboard campaign. Hill, who has been an outspoken critic of the B.C. wolf cull said, "Everyone wants to save endangered or threatened mountain caribou populations, but killing wolves for a few years -- or even decades -- won't save the caribou. All mountain caribou in B.C. exist in multi-predator ecosystems and the best science has told us that wolves invariably account for a minority of the total predation. Killing wolves to save caribou makes no sense in the long or short term. The wolf cull is little more than a transparent attempt by the government to appear to be doing something to save caribou, while avoiding the true heavy-lifting needed to adequately protect and restore caribou habitat."

Across the political spectrum in B.C. there is a stunning amount of ignorance regarding wolf (and ungulate) biology and ecology. Whether motivated by scientific illiteracy or partisan opportunism, or in some cases both, individual politicians from all three provincial parties represented in the B.C. legislature have expressed varying degrees of support for the cull, ranging from fervent to lukewarm.

This politicization of wolf management, and associated willful neglect of the best available science, has become ingrained and institutionalized within the provincial government bureaucracy responsible for the management of large carnivores. The result is the ongoing persecution of B.C.'s wolves by way of a seat-of-the-pants, shoot-first-ask-questions-later approach toward the species. The conservation group Wolf Awareness Inc. has just attained the B.C. government's operational plan for the South Peace wolf cull through a Freedom of Information request.

Reading through the document, "Experimental Wolf Reduction to Enhance the Recovery of Threatened Caribou Herds in the South Peace," provides insights into the truly experimental nature of the wolf cull, as the title indicates, and confirms what critics have been asserting all along; slaughtering wolves to ostensibly protect caribou has no basis in scientific fact and is a desperate, and ultimately futile, attempt to compensate for the devastating impacts of habitat destruction.

But the current wolf cull is only part of that aforementioned persecution; more than 1,000 wolves have been killed, the overwhelming majority for "recreational" purposes and by resident trophy hunters. This staggering annual mortality is being directed upon a wolf population that, according to B.C. government estimates, approximately numbers half that of the provincial grizzly bear population.

In their recently published paper in the scientific journal Biological Conservation, "Witnessing extinction -- Cumulative impacts across landscapes and the future loss of an evolutionarily significant unit of woodland caribou in Canada," wildlife biologists Chris Johnson, Libby Ehlers, and Dale Seip state that "Habitat change is a major driver of species distribution and persistence, but there have been few recorded extinction events for terrestrial mammals across Canada. Currently, we are observing the decline, extirpation, and perhaps extinction of several evolutionarily significant units of woodland caribou."

The authors conclude "The rapid decline of caribou across the South Peace region suggests that there is an immediate need for habitat protection and restoration...Legislated recovery of caribou across the South Peace region is made difficult by the occurrence of resource industries...These industries, and their footprint on the landscape, will expand in the future with impacts for caribou habitat and the persistence of those subpopulations." 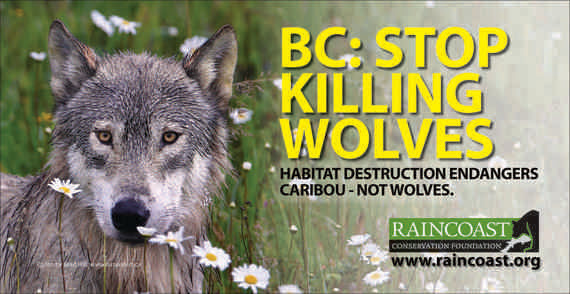 "Wolves are scapegoated for the decline of caribou in a morally and scientifically bankrupt attempt to protect Canada's industrial sacred cows: oil and gas, mining, and forestry. The relentless destruction of forest wilderness via industrial development has conspired to deprive caribou of their life requisites, while exposing them to levels of wolf predation they did not evolve with and are incapable of adapting to," said Raincoast senior scientist and renowned large carnivore expert Dr. Paul Paquet.

"Yet, governments habitually favour the destruction of wolves over any consequential protection, enhancement, or restoration of caribou habitat. As a result, caribou are on a long-term slide to extinction; not because of what wolves and other predators are doing but because of what humans have already done."