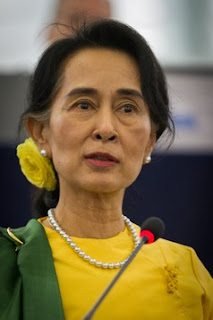 Writing in the New York Times in an article entitled “Myanmar Generals Set the Stage for Their Own Exit”, Thomas Fuller expressed his and the media’s failure to recognize the total fraud that is Burmese democracy.

“The official results are still being tabulated,” he wrote, “but all signs, so far, point to that rarest of things: an authoritarian government peacefully giving up power after what outside election monitors have deemed a credible vote.”

Fuller, who said nothing about the persecuted Rohingya minority and little about the other millions of Burmese who were denied the chance to vote, only managed to contribute to the seemingly baffling media euphoria about the country’s alleged democracy.

Reporting from Burma – also known as Myanmar – Timothy McLaughlin dealt with the Rohingya subject directly; however, he offered a misleading sentiment that the oppressed minority, which was excluded from the vote, can see a ‘glimmer of hope’ in the outcome of the elections.

According to results, the National League for Democracy (NLD), under the leadership of Aung San Suu Kyi, has won a stunning victory over its rivals in the ruling party, by garnering 348 seats, in contrast with only 40 seats obtained by the military-controlled party that has ruled Burma since 1962.

There is no real basis for that supposed ‘glimmer of hope’, aside from a non-binding statement made by an NLD official, Win Htein, that the Citizenship Act of 1982 “must be reviewed” – an Act which served as the basis for discrimination against the Rohingya.

Win Htein’s comments are disingenuous, let alone non-committal, at best. The Citizenship Act “must be reviewed because it is too extreme… review that law and make necessary amendments so that we consider those people who are already in our country, maybe second generation, so they will be considered as citizens,” he told Reuters. His comments promote the myth that the well over one million Rohingya are ‘Bengalis”, who came to his Burma only recently as hapless immigrants.

While Burma, like any other ASEAN country has its fair share of immigrants, the fact is that most Rohingya Muslims are native to the state of “Rohang” (originally a kingdom in itself), officially known as Rakhine or Arakan. Over the years, especially in the late 19th century and early 20th century, the original inhabitants of Arakan were joined by cheap or forced labor from Bengal and India, who permanently settled there.

For decades, tension has brewed between Buddhists and Muslims in the region. Eventually, the majority, backed by a military junta, prevailed over the minority which had no serious regional or international backers. A rising tide of Buddhist nationalism has reached genocidal levels in recent years and is targeting not only Rohingya Muslims, but also Christian and other minority groups in the country.

The Rohingya population of Arakan, estimated at nearly 800,000, subsist between the nightmare of having no legal status (as they are still denied citizenship), little or no rights and the occasional ethnic purges carried out by their neighbors. While Buddhists also paid a price for the clashes, the stateless Rohingya, being isolated and defenseless, were the ones to carry the heaviest death toll and destruction.

Writing in the Ecologist,Nafeez Ahmed cited alarming new findings conducted last October by the International State Crime Initiative (ISCI) at Queen Mary University in London, which “found that the Rohingya ..face ‘the final stages of a genocidal process’.” “Leaked government documents show that plans to inflict ‘mass annihilation’ have been prepared at the highest levels,” he wrote.

Not only did the elections disempower and further alienate the Rohingya, but it also empowered political groups that have openly sought the ‘mass annihilation’ of the defenseless minority, most of whom are living in abject poverty within closed refugee camps, while thousands have perished at sea in a bid to escape the violence.

One of these nationalist groups is the Arakan National Party (ANP), which has incited and enacted violent pogroms against the Rohingya for years. In fact, ethnically cleansing the Rohingya is a main rally cry for a group which now has a democratically elected 29 national level representatives in Rakhine, and is also in “decisive control of the state’s regional assembly,” according to Reuters.

The sad fact is that much of the reporting on the Burmese elections stoked false hope that a democracy has finally prevailed in that country, and either brushed over or completely ignored the plight of the Rohingya altogether.

But how could anyone with a reasonable degree of knowledge in the political, constitutional and historical context of the November elections ignore the major discrepancies of the army-championed style of “Discipline Flourishing Democracy” program announced in August 2003 by General Khin Nyunt?

Burma’s generals have organized every facet of their sham democratic campaign since the early 1990s so that they give an illusion of democracy, while retaining power.

When the outcome of the 1990 elections did not work in their favor, they crushed their opponents and placed the leaders of the NLD under house-arrests or prison. This action, however, cost them international isolation outside the domain of China and a few ASEAN countries.

For years, the generals learned how to craft a system that would allow them to rule the country, while making symbolic gestures to meet the west’s half-hearted condition of democratization and pluralism.

The most recent elections have been, by far, the most successful of the generals’ democracy schemes in recent years. This clever scheme is rooted partly in the 2008 Constitution, “which elevates core interests of the military (such as the military budget, appointments, business conglomerates and security matters) above the law and parliamentary oversight,” wrote Maung Zarni in the Guardian.

According to the controversial constitution, “the military serves as the ultimate custodian with the power to discipline any elected government or MP who dares to stray from the military’s chosen path and its definition of parliamentary democracy,” Zarni wrote.

In fact, just last June, the military, defeated an attempt by parliamentarians to rescind its veto power. This is why the military remains the upper hand in the country, regardless of who wins or loses the elections. By reserving for itself a quarter of the seats in parliament, the military will continue to enjoy a veto power.

Then, why is there all this excitement about Burmese democracy? Simple – the rivalry between China and the United States, and their respective allies have reached a point where the massive amount of untapped wealth of oil and natural gas in Burma can no longer be ignored.

The US, UK and other countries are salivating at the limitless potential of economic opportunities in that country, estimated at “3.2 billion barrels of oil and 18 trillion cubic feet of natural gas reserves.” According to a UK government report, under the theme, a ‘hotspot for exploration,” Burma’s “unproven resources may be vastly greater.”

With Burma climbing to the world top five countries in terms of proven oil and gas reserves, terms such as genocides, military juntas and human rights are abruptly and largely omitted from the new discourse.

Indeed, a whole new narrative is being conveniently drafted, written jointly by the Burmese army, nationalist parties, Aung San Suu Kyi’s NLD, western investors and anyone else who stands to benefit from the treasures of one of the world’s worst human rights violators.

Ramzy Baroud is an author and a journalist. His latest volume is The Second Palestinian Intifada: A Chronicle of a People's Struggle (Pluto Press, London). He can be reached at ramzybaroud@hotmail.com. Read other articles by Ramzy.