The Man Behind the BlackRock Curtain

Exposing BlackRock: Who's Afraid Of Laurence Fink and His Overpowering Institution? 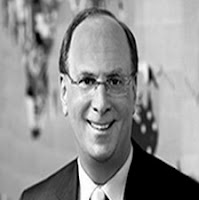 It’s not a bank, nor an insurance company, central bank, finance ministry or sovereign wealth fund. But it advises or owns such institutions. It operates virtually unregulated, often in the background, yet there is scarcely a company, country or region of the planet that this, the world’s largest asset management firm, does not touch or influence.

At a mere 27 years of age, BlackRock manages $4.5 trillion in assets, making it the single largest investor on Earth. It manages more wealth than Japan and Germany have in GDP.

In fact, only China and the United States have a larger GDP than BlackRock has assets under management. Yet when one includes assets that the company not only manages, but advises upon, the number soars to around $15 trillion, roughly equal to U.S. GDP.

It’s safe to say that BlackRock is the single largest financial institution in the world: a vast holding company that has become a major shareholder in roughly 40% of all publicly traded companies in the U.S., the largest single shareholder in one out of every five U.S. corporations, and one of the largest shareholders in companies around the world, from Canada to Brazil, Germany, Japan, China and beyond.


Specifically, BlackRock is one of the top shareholders in all major U.S. banks, including JPMorgan Chase, Citigroup, Bank of America, Goldman Sachs, Morgan Stanley, and Wells Fargo.

But despite its size and influence, BlackRock remains virtually unregulated as an asset management firm. Unlike a bank, asset management firms do not manage and invest their own money, but do so on behalf of their many clients. In the case of BlackRock, those clients come in the form of banks, corporations, insurance companies, pension funds, sovereign wealth funds, central banks and foundations. Gerald Davis, a professor of management and organization at the University of Michigan, described BlackRock as “the silent giant” that few know about, but which is “incredibly powerful.”

The company’s power is expressed not merely in terms of its equity (shareholdings) and bonds (debt ownership), but in its role as an adviser to governments and institutions. This role is not only played by certain divisions within the company, but by the co-founder and CEO of BlackRock itself, Larry Fink. The son of a shoe salesman and English professor, Laurence Fink started his finance career working for First Boston, trading bonds during the 1980s, and became the firm’s youngest-ever managing director at the age of 31.

Fink Ascends to the Top


In 1988, Fink, along with a handful of other traders, founded BlackRock with support from its first financial backer, the private equity firm Blackstone (notice the similar name). Within five years, BlackRock had more than $20 billion under management. But in 1994, a conflict with Blackstone’s Stephen Schwarzman led to a separation of the two companies.

Schwarzman sold Blackstone’s 32% share of BlackRock to a Pittsburgh bank, PNC, for $240 million, a transaction Schwarzman would later regret.

BlackRock went public in 1999 and began acquiring other companies throughout the 2000s. But the company’s most profitable move was its purchase of Barclays Global Investors for $13.5 billion, turning BlackRock into the world’s largest asset management firm overnight. This occurred in 2009, in the immediate aftermath of the global financial crisis, and the firm took on a vast portfolio of exchange-traded funds (ETFs) known as iShares.

But even before it earned the title of largest money manager in the world, BlackRock was raising eyebrows concerning its business advising and contracting with governments. When the financial crisis struck the U.S. in 2008, the U.S. Treasury and Federal Reserve turned to BlackRock and Larry Fink for support. BlackRock advised the government on the rescues, bailouts and purchases of Bear Stearns, American International Group (AIG), Citigroup, Fannie Mae and Freddie Mac.

Throughout the crisis, Fink would find himself on the phone multiple times a day in conversation with then-President of the New York Federal Reserve, Timothy Geithner, Treasury Secretary and the former CEO of Goldman Sachs, Hank Paulson, and Federal Reserve Chairman Ben Bernanke. Fink explained, “It gives comfort to our clients that we are being involved in some of the solutions of our economy, and it allows us to show our clients that we are being asked in these difficult situations to provide advice.”

According to Vanity Fair, one of Fink’s favorite phrases to insert into casual conversations is: “As I told Washington…” And it’s something to be said without much exaggeration. When Timothy Geithner went from being President of the New York Fed to Secretary of the U.S. Treasury, Fink’s access to the top echelons of political power grew immensely. Indeed, apart from other government officials, the BlackRock chief became “the Treasury secretary’s most frequent corporate interlocutor and an emblem of BlackRock’s growing influence in global financial affairs,” noted the Financial Times.

Using data compiled from the Treasury Secretary’s public records from 2009 to 2013, Geithner held phone calls or private meetings with Fink at least 104 times during the duration of his term. Even with Geithner’s successor at Treasury, Jack Lew, pervasive contact has been maintained with Fink.


In 2013, BlackRock hired to its board of directors Cheryl Mills, a “longtime confidant and counselor to former secretary of state Hillary Rodham Clinton.” Mills was chief of staff to Clinton at the State Department, and was “among the inner circle of advisers helping Clinton chart her plans for the future.”

Mills has a long history with both Clintons; she was one of President Bill Clinton’s top attorneys during his impeachment. A former aide with knowledge of the Clinton-Mills relationship explained,

“There are no secrets… Cheryl knows everything and that’s a great equalizer for them.”


In an interview with the Washington Post, Mills explained that she still advises and speaks with Hillary regularly.

As Hillary Clinton campaigns for the Democratic presidential nomination, her discussions of Wall Street regulations focus almost exclusively on banks – but nowhere does she mention the role played by asset management firms like BlackRock. In fact, in her comments on the subject, Clinton actually tends to parrot the ideas that have been put forward by Fink himself. For instance, after Clinton gave a speech on Wall Street reform, The New York Times noted that it seemed as if “she could have been channeling Laurence D. Fink.”

For years, Fink has been touted as a possible Treasury Secretary the likelihood of which may increase if Clinton becomes president. Indeed, Fink, a longtime Democrat, would be perfectly suited to such a position as the “top consigliere” of Wall Street in Washington, Suzanna Andrews writes in Vanity Fair, “and the leading member of the country’s financial oligarchy.”

And, of course, it helps that Fink and BlackRock are not simply influential within the U.S. but across the globe. BlackRock has been hired as a consultant and adviser in Europe multiple times throughout the European debt crisis, having worked with the Irish central bank, the Greek central bank, and more recently the European Central Bank to advise on its quantitative easing program.

With $4.5 trillion in assets, under management the firm is without a doubt “one of, if not the, most influential financial institutions in the world,” noted a BlackRock co-founder. And Larry Fink, the architect of “his own Wall Street empire,” could become a household name in U.S. politics soon enough.

Andrew Gavin Marshall is an independent researcher and writer based in Montreal, Canada, writing on a number of social, political, economic, and historical issues. He is co-editor of the book, The Global Economic Crisis: The Great Depression of the XXI Century. Read other articles by Andrew Gavin, or visit Andrew Gavin's website.