Hillary's Con: Running from the Record

The 2016 Democratic Convention in Philadelphia was a multi-layered, raucous display of political theater. A host of delegates loyal to Senator Bernie Sanders were inside in large numbers exclaiming “No more war” during former Secretary of Defense Leon Panetta’s speech and raising all kinds of progressive, rebellious signs and banners against the Hillary crowd. 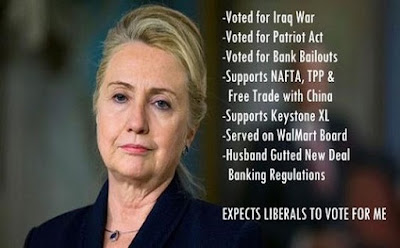 Although Hillary addressed them directly in her acceptance speech, “Your cause is my cause,” those dissatisfied delegates in the hall saw her rhetoric for what it was: insincere and opportunistic.

She said she’d tax the wealthy for public necessities, but declined to mention a sales tax on Wall Street speculation that could bring in as much as $300 billion a year to support such initiatives. She opposed “unfair trade agreements,” but remarkably omitted saying she was against the TPP (the notorious pending Trans Pacific Trade Agreement backed by Obama that is receiving wide left/right opposition).

She paid lip service to a “living wage” but avoided endorsing a $15 an hour minimum wage, which would help single moms and their children – people she wants us to believe have been her enduring cause. Few people know that it took until the spring of 2014 before candidate Clinton would come out for even a $10.10 minimum wage. News reports noted that Clinton, a former member of Walmart’s board of directors and Arkansas corporate lawyer, was wrestling with how to support $10.10 per hour without alienating her Wall Street friends.

“Caring for kids” doesn’t extend to encircled Gaza’s defenseless children, hundreds of whom were killed by American-made weapons wielded by the all powerful Israeli military. Gaza is the the world’s largest open air prison and under illegal blockade. Remember, as Secretary of State, Hillary fully backed war crimes, condemned by almost all countries in the world. On the stage in Philadelphia, she spoke of backing Israel’s security without any mention of Palestinian rights or the need to end Israel’s illegal occupation of the territories.

It is true, as numerous speakers repeated, Clinton is “most qualified and experienced,” but her record shows those qualities have led to belligerent, unlawful military actions that are now boomeranging against U.S. interests. The intervention she insistently called for in Libya, with Obama’s foolish consent, over-rode the wiser counsel of Secretary of Defense Robert Gates (and his generals), who warned of the chaos that would follow. He was proven right, with chaotic violence now all over Libya spilling into other African countries. This is but one example of what Bernie Sanders meant during the debates when he referenced her “poor judgement.”

The media coverage of political conventions tends to sink to the level of the circus. The PBS/NPR coverage with some half dozen reporters and two commentators proved to be thin, light, soft and superficial. Otherwise smart media communicators were reduced to very heavy focus on exactly what the Party’s manipulators wanted. “What is Hillary really like?” Of course the stage was filled with frothy admiration, awe and acclamation. But why didn’t the media point out some of the factual omissions, the contradictions to the endless sugarcoating of the nominee?

To her credit, NPR/PBS reporter, Susan Davis, did blurt out that the Convention program was mostly about personality and character with little policy. Reporters did, however, point out that unlike all other candidates, Hillary Clinton has not had a news conference since last December to showcase her supposed experience, qualifications and knowledge!

Why wouldn’t Hillary Clinton, in her attack on Donald Trump, demand the release of his tax returns? Hillary and Bill have regularly released their tax returns. Maybe because Trump would demand Hillary release her secret Wall Street transcripts of her $5,000-a-minute paid speeches to big bankers and other businesses.

To her verbal credit, Hillary Clinton raised the “unpatriotic” charge against too many U.S. corporations (not all she added) when it comes to our country. Born in the U.S.A, grown to profit on the backs of American workers, bailed out by American taxpayers and occasionally by the U.S. Marines overseas, these giant companies have no allegiance to country or community. They are, with trade agreements and other inducements, abandoning America’s workers and escaping America’s laws and taxes.

Hearing the word “unpatriotic” applied to those companies I could imagine these firms’ executives and P.R. flacks shuddering for the only time during her 55-minute address. The stigma of being “unpatriotic” to their enabling native country can have consequential legs for turning public opinion even more deeply against these monetized corporate Goliaths.

Stung by the consistently high “untrustworthy” ratings since polling started asking that question (only Trump exceeds her in most polls), she declared again that no one achieves greatness alone, that it takes us working together, that it “Takes a Village,” alluding to her earlier book. If that is true, then Together must have more power than the Few. “Together” should include workers, consumers, small taxpayers, voters and communities who are excluded from power, from the tools of democracy – electoral reforms and clean elections, more unions and cooperatives, access to justice for wrongful injuries and against crony capitalism and corporate crime and greater citizen empowerment. Does she have an agenda for a devolution of power from the few to the many so that we can be “stronger together,” (her slogan for 2016)? No way. Mum’s the word!

This immense gap has been the Clinton duo’s con job on America for many years. Sugarcoating phrases, populist flattery, getting the election over with and jumping back into the fold of the plutocracy is their customary M.O.

Alert voters could see it coming at the Convention: the militarism for Hillary the Hawk on day four in Philadelphia and the arrival of the corporate fat cats. Or, as the New York Times headlined: “Top Donors Leave Sidelines, Checkbooks in Hand.”

That’s where our nation’s two-party political leadership is today. When will the vast left/right majority rise to take over and reverse the eviscerating policies and practices of this political duopoly?

Ralph Nader is a leading consumer advocate, the author of Unstoppable The Emerging Left Right Alliance to Dismantle the Corporate State (2014), among many other books, and a four-time candidate for US President. Read other articles by Ralph, or visit Ralph's website.